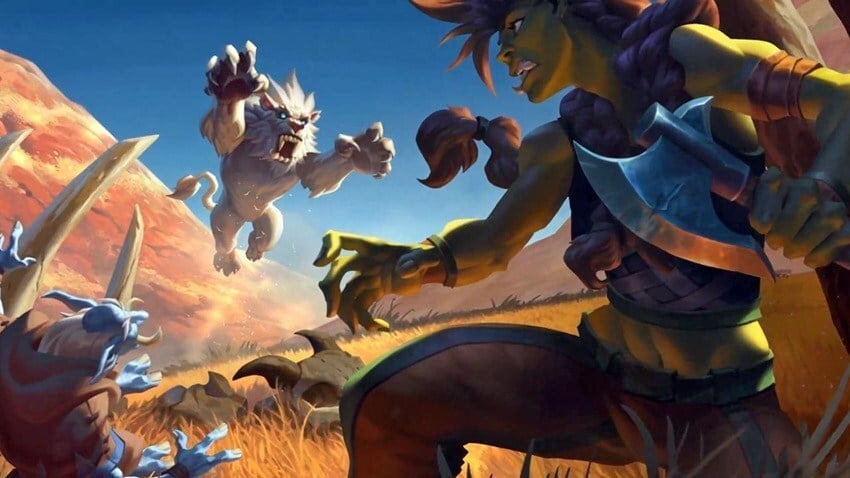 The card reveal season for Hearthstone’s Forged in the Barrens expansion continued today. The official Youtube channel revealed six new cards that either synergize with Spell Schools or are new spells which use the mechanic. The six cards are follows: 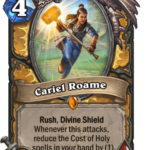 Invigorating Sermon is a four-mana common Holy Paladin spell that gives a +1/+1 stat buff to all minions in your hand, deck, and battlefield.

Veteran Warmedic is an epic four-mana 3/5 Paladin minion with an ability that triggers after you cast a Holy spell, which summons a 2/2 Medic with Lifesteal to your side of the board.

Cariel Roame is a legendary four-mana 4/3 Paladin with the Rush and Divine Shield keywords. In addition to this, she has an ability that activates after she declares an attack, reducing the mana cost of all Holy spells in your hand by one.

Tamsin Roame is the legendary for Warlock that costs three mana and has a 1/3 stat line. Her ability adds a copy of any Shadow spell that you cast which costs one or more mana back to your hand. The fresh copy of the Shadow spell added to your hand costs zero mana, allowing for powerful combos. In the video, these two legendary minions are noted to be sisters and will have their lore be explained in the upcoming Mercenary Mode.

Grimoire of Sacrifice is a one-mana common Shadow spell for Warlock which has an extra cost that requires you to destroy a friendly minion. After paying the cost, two damage is dealt to all enemy minions.

Soul Rend is a rare four-mana Shadow spell for Warlock that deals five damage to all minions on the board. For each minion destroyed by this effect, a card in your deck is randomly selected to be removed from the game.

Invigorating Sermon is comparable to Druid’s Survival of the Fittest, which provides a much larger stat boost for a heavier price. Since Paladin is unable to ramp or cheat mana outside of Nozdormu the Timeless (who is rotating out of Standard with Forged in the Barrens’ arrival), this cheaper alternative will be much appreciated for the token playstyle of the class.

Veteran Warmedic and Cariel Roame will help push the Holy Spell School of cards forward. The Warmedic will allow you to swarm the board with 2/2 minions that can help control the board and stabilize against aggro due to the Lifesteal keyword attached to them. Since Veteran Warmedic activates her ability after Holy spells are cast, this means spells that affect the entire board (like Invigorating Sermon or Equality) will not affect the newly summoned token.

Cariel Roame’s strength cannot be undervalued. Mana discounts and activating cards sooner than they’re intended to be played can bring powerful strategies forward. While there are no expensive Holy spells revealed yet, if a powerful six-mana Holy spell is ever printed, that will allow you to play it one turn faster than normal. Aside from her mana-discounting ability, a 4/3 statline combined with Rush and Divine Shield allows her to be a potent threat on her own which helps answer any threats on the board.

Tamsin Roame taps into the opposite end of the Spell School spectrum with Shadow. While Veteran Warmedic and Cariel Roame allow for creation and mana discounts, Tamsin Roame focuses on combo and slower controlling tools. The ability to duplicate your powerful destruction spells means your opponent will need to think twice in how they develop their board and approach with any aggression.

Since Tamsin Roame’s ability activates whenever you cast a spell (as opposed to afterwards), she does not need to survive the spell that you’re casting to copy it. This means you can hold a free Twisted Nether if you manage to cast it while Tamsin Roame is on the field, which can be a powerful answer or board swing on a future turn.

Grimoire of Sacrifice is a potent board clear that allows Warlock to deal two damage solely to enemy minions for only one mana, which is a powerful effect for such a cheap cost. While a friendly minion needs to be destroyed to activate this effect, this investment can be circumvented by destroying a friendly minion with a powerful Deathrattle, like Nerubian Egg who will be joining Standard again through the Core Set.

Soul Rend is another strong Shadow spell that has immense damage for its cost but has an alternate price attached. While five damage for four mana is powerful for its cost, removing cards from your deck allows your opponent to know which cards they no longer need to play around. In addition to this, this card cannot be used if your goal is to fatigue the opponent.

Despite this downside, Soul Rend has a new potential strategy forming within the next expansion. The recently revealed Blood Shard Bristleback deals six damage as long as your deck has 10 or fewer cards. This means there is a high chance for more cards to be released that focus on having a smaller deck size, which Soul Rend will assist in bringing you towards at a faster rate.

Forged in the Barrens will release on March 30. Players can pre-purchase the expansion in one of two different bundles from Blizzard’s online store or in the Hearthstone client.