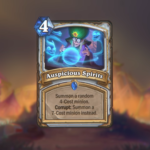 The card reveal season for Hearthstone’s Madness at the Darkmoon Faire expansion is quickly coming to an end. And today, Blizzard revealed six new cards that build upon previous mechanics and show off new themes with a cycle of new cards.

Optimistic Ogre is a five-mana 6/7 common minion that has a 50-percent chance to attack the correct unit. Jewel of N’zoth is an eight-mana Epic Hunter spell that revives three of your Deathrattle minions that died during the game.

The final card revealed is Tikatus, a six-mana Legendary Warlock Demon with 8/8 combat stats and a Battlecry that removes the top five cards from your deck. If you can Corrupt Tikatus, he’ll destroy the top five cards in your opponent’s deck instead.

Jewel of N’zoth is a part of a cycle of cards that will pay homage to the original form of the four Old Gods. While it’s unknown what the effects of the other three will be, Hunter players will definitely enjoy the Deathrattle strategies that Jewel of N’zoth provides.

Strongman and Optimistic Ogre are generally pack-filler that players will usually enjoy seeing in Arena. Strongman does have some potential in Corrupt-focused decks, though, since he can allow for a tempo play after spending a ton of mana trying to reach his Corrupted state.

Auspicious Spirits helps build upon the Corrupt identity for Priest. While a random seven drop for four mana sounds potent, the earliest this can be played would be turn six since you’d need to spend five mana to first Corrupt it.

Cascading Disaster and Tikatus are Warlock’s Corrupt-themed cards. Even though Cascading Disaster allows for a scaling option for Warlocks to look forward to with removal, Warlock removal is already potent, so it may be tough for current slower Warlock builds to fit it in. Tikatus also provides an interesting dichotomy for the Corrupt mechanic since the Corrupted version isn’t a strict upgrade. If a Warlock player is behind on tempo, they can play Tikatus as a five-mana 6/6 and try to fight for the board at the cost of some of their deck. If you’re playing a slower strategy, though, you can wait for Tikatus to grow stronger and burn five of your opponent’s cards, bringing them closer to fatigue.