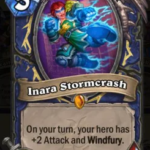 Hearthstone’s Madness at the Darkmoon Faire’s card reveal season is finishing up its last day before the final card dump stream. Previously mentioned in a teaser by Blizzard, the latest cards to be unveiled are themed around Shaman’s melee-focused talents from World of Warcraft.

Inara Stormcrash is a five-mana 4/5 Legendary Shaman minion that gives your hero two extra power and Windfury during your turn. Cagematch Custodian is a two-mana 2/2 common Shaman Elemental with a Battlecry that draws a weapon from your deck. Whack-A-Gnoll Hammer is a three-mana 3/2 rare Shaman weapon that gives a random friendly minion +1/+1 in combat stats after you swing with it.

Inara Stormcrash is a potent card on her own. The ability to trade life to control the board or deal four free damage every turn will be vital to any aggressive or midrange Shaman deck. Her power in aggro-based strategies is also apparent because whenever you give your hero extra power, whether it be through a weapon or effect like Rockbiter Weapon, the power is doubled due to Windfury.

Cagematch Custodian is comparable to Rogue’s Cavern Shinyfinder in the Kobolds & Catacombs expansion. The ability to tutor a weapon from your deck while developing a board can’t be underrated. While the weapon quality of the Shaman class isn’t as potent as Rogue, it can be expected that the class will find more tools within the upcoming expansion.

Whack-A-Gnoll as a weapon is hoping to fill that current void of quality weapons that Shaman lacks right now. As a three-mana 3/2 weapon, it already curves nicely following the Cagematch Custodian. Being able to control the board while buffing your own will allow Shaman to be a contender for being able to keep control of the board.