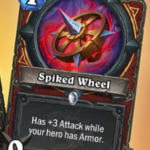 Hearthstone’s Madness at the Darkmoon Faire expansion is setting a new precedent because every expansion from here on out will have a mini-set halfway through its life cycle. While Madness at the Darkmoon Faire’s The Darkmoon Races isn’t the first mini-set (that title goes to Galakrond’s Awakening during Descent of Dragons), this is still an exciting time for fans of the game since 35 new cards are playable to take onto the ladder.

To access these cards, players can either open any leftover Madness at the Darkmoon Faire packs since these cards are in the cycle now or they can spend either 2,000 gold or $14.99 in the store and automatically unlock all of the cards.

Here are 10 cards from The Darkmoon Races that will surely help shape the Hearthstone meta before the Year of the Phoenix concludes.

Spiked Wheel is a part of a cycle of Armor-synergy cards that was released for Warrior in this mini-set. Out of all the Warrior cards that were released, Spiked Wheel shows promise with its power level. Due to its one mana cost, Warriors can play this card on turn one and opponents will need to decide which early minions they want to throw away into the weapon.

A Spiked Wheel on turn one is nearly comparable to the Fiery War Axe of old before it got nerfed. Thanks to the ability to Armor Up on turn two, you always get the three power from the weapon at your command. In addition, while your opponent may be inclined to not play minions to avoid getting traded by the weapon, you can spend time developing and make your opponent fall behind in tempo.

The main downside that may keep this card away from current Warrior builds is that Warriors already use a ton of weapons. But this card has potential in Control Warrior decks.

While Warlock isn’t a class that traditionally struggles with drawing thanks to its Hero Power, the class always finds itself with potent drawing tools from time to time—and Backfire has a chance to be added to that repertoire of card draw. With Darkglare Warlock, a list that’s found success in Standard and Wild, Backfire can be another drawing tool that can return mana when used thanks to the self-damage aspect.

While current aggressive Warlocks go for a Discard package thanks to Hand of Gul’dan, Backfire opens up the list to add in more self-damage cards. Aside from most likely finding its potential usage inside aggressive Warlock decks, there’s a small chance that Backfire can pop up in slower Warlock lists that try to cycle through its cards as fast as possible to play Tickatus.

While Spell Damage Mage and Shaman haven’t been the most popular or powerful decks since Scholomance Academy’s release, Imprisoned Phoenix has a chance to change that. One of the main weaknesses of those decks is setting up Spell Damage turns outside of Rune Dagger due to Spell Damage minions being frail and easy to remove. Since Imprisoned Phoenix will be Dormant for two turns, you can line up removal, Spell Damage combos, or massive damage when they wake up.

Combined with the new Conjure Mana Biscuit, Combo-based Mage decks have a healthy chance to thrive in a new meta. 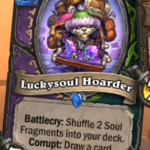 Soul Fragment decks have been prominent and popular in both Demon Hunter and Warlock. While those lists are optimized right now, Luckysoul Hoarder has a chance to spawn new types of Soul Fragment lists that focus on Big Demons.

The main drawback holding back Big Demon Soul Fragment lists is that Spirit Jailer is an enabler for Soul Fragments but a tiny Demon that pollutes the Demon pool. Since Luckysoul Hoarder is a minion without a tribe, it can go into these new lists without getting in the way of Demon synergies.

If Luckysoul Hoarder isn’t strong enough to make these new lists work, he’s just an individually powerful enough card to find his way into current Soul Fragment decks due to his ability to replace himself with card draw after he’s Corrupted.

Aggressive decks have had a strong share of the ladder in recent metas and Armor Vendor has the chance to combat those decks in a meaningful way. Veteran players of Hearthstone may recall a time where Zombie Chow and Mistress of Mixtures from Curse of Naxxramas and Mean Streets of Gadgetzan both existed as strong anti-aggressive cards. These powerful one drops could help stave off aggro either due to their stats for their cost (Zombie Chow) or their ability to heal the player (Mistress of Mixtures) while being an early body to help contest the board.

Armor Vendor is the newest iteration that’s more closely comparable to Mistress of Mixtures since they both have four stat points in total and “heal” both players for four. The main draw to Armor Vendor is that she can always give the user four life due to armor going beyond the 30 health limit. In addition, since Armor Vendor is a Battlecry, the health effect gain is immediate and she can potentially slot into more decks like Quest Shaman.

While most builds of the current Paladin and Warrior lists are more aggressive and tempo oriented, Barricade has a chance to build upon the controlling variants of those classes. Some builds of Paladin already try to go the “Big” route and use Nozdormu on turn three or four to reach maximum mana as soon as possible. Barricade has a chance to pop up in those lists since it’s a card that can build a quick defensive board from nothing.

In a Control Warrior list, Barricade is just more of a pile of stats that the class can rely on after spending earlier turns removing threats or building their armor. Overall, whichever class Barricade finds itself more use in, it’s paramount to never cast this while you already have a minion because the card is extremely inefficient if your board isn’t empty.

Current Druid lists usually lean more into Spell or Ramp versions with Yogg, Ysera, or Y’shaarj as the endgame plan. Arbor Up could give Token Druid one last chance to shine before the current sets of tools rotate out with the Year of the Phoenix’s departure. While Token Druid mainly found its popularity back in the Year of the Dragon, the list has always found moderate success with its strategy of constantly flooding the board and then buffing it to perform lethal on the opponent once there are enough minions to do so.

Arbor Up has the power to add more minions to fight for tempo while serving as a buff to their power and bulk. While Arbor Up’s efficiency scales up with the more minions you have, if you’re desperate enough, two 4/3s for five mana can be a fair start to begin catching up when you’re behind. 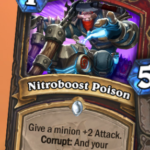 Players who experienced the Goblins versus Gnomes meta will remember a popular Rogue deck that used the card Tinker’s Sharpsword Oil. Nitroboost Poison brings that card back in a condensed, smaller-scale effect with a cheaper mana cost. Already comparable to Deadly Poison, a strong card in Rogue’s past, Nitroboost Poison can deal up to four damage on its initial cast if you can swing with your minion on the same turn. This four damage also increases the more charges you have on your weapon or if the buffed minion survives for multiple turns.

One major downside to be mindful of with Nitroboost Poison (compared to Tinker’s Sharpsword Oil) is that you need a minion to target to boost the power of your weapon. You’ll be unable to boost the strength of your weapon if your board is empty.

As the last Dual-Class card to appear on this list, Felfire Deadeye has a good chance to push both Demon Hunter and Hunter forward due to its mana-discounting power. In Demon Hunter, playing this on turn two gives you one free damage to either hit the opponent or help control the board. If they fail to remove Felfire Deadeye, this will continue into future turns and allow you to use your hero-swinging synergy cards.

When used in Hunter, the Felfire Deadeye can help trigger your Inspire-style cards that revolve around using your Hero Power. If you manage to put two Felfire Deadeyes on the board, then you get a free Hero Power every turn until your opponent can remove Felfire Deadeye. Thanks to its three health on turn two, not every class can easily remove this card, as proven by the Phase Stalker that’s also popular in Hunter.

Felfire Deadeye will draw the attention of every deck fighting against it since no opponent will want to give either class a mana discount on their aggressive Hero Powers.

While Rogue’s presence on the ladder has been lessened by a moderate amount since Edwin VanCleef’s nerf, the class has still been fighting for a top spot on the tier lists. And Sparkjoy Cheat’s arrival will help Rogue contend for that spot. Sparkjoy Cheat’s strength comes from its ability to cast a two-mana Secret from your hand for free, as well as its ability to maintain card advantage and draw a card while doing so.

Rogue has been a class that’s branded a majority of its identity throughout Hearthstone as a tempo-oriented class. Sparkjoy Cheat takes the Secret variants of Rogue, an already powerful version of the class in past expansions, and pushes it forward to a new level. Since Sparkjoy Cheat doesn’t specify what kind of Secret needs to be in your hand, if you burgled a Secret from another class like Mage, you have the chance to cast an even more expansive Secret in your hand without a cost.

The only weakness to Sparkjoy Cheat is draw order. It’s a substantially weaker card if you don’t have a Secret in your hand.

You can try out these new cards for yourself since Hearthstone: The Darkmoon Races is now live.