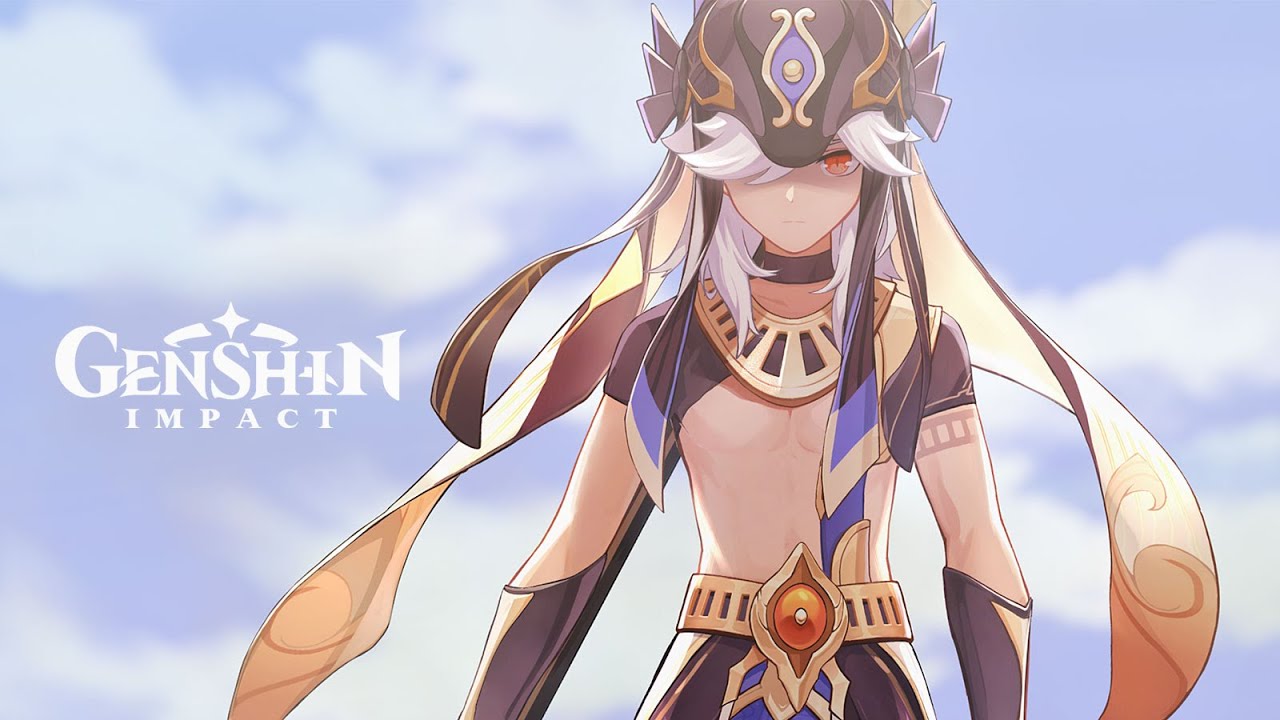 After first being teased almost exactly two years ago, five-star Electo Polearm character Cyno is finally about to make his Teyvat debut. The Sumeru character was first teased in a trailer previewing the future of Genshin Impact that was released on Sept. 27, 2020, and has since been highly anticipated by the Genshin community.

The video Cyno was originally teased in is called “Teyvat Chapter Storyline Preview: Travail.” He was unveiled with the phrase “Truth amongst the pages of Purana” and showcased as the face of the then very far-off Sumeru update.

Now, after a lengthy wait and continuous excitement within the Genshin Impact community, the Sumeru character is officially set to arrive in the Version 3.1 update as the first new featured five-star character of the update. Ahead of his highly anticipated release, miHoYo unveiled a plethora of information, including the Electro character’s backstory, abilities, and required materials.

The upcoming playable five-star Electro Polearm character serves as the General Mahamatra for the Sumeru Akademiya. This means that he supervises those who are researchers for the Akademiya and ensures they are adhering to the rules of the school.

Cyno is known for being highly focused and efficient as his duties require him to exact the Akademiya discipline and rules. The Akademiya believes in the consistent pursuit of knowledge, but only through the correct means and for morally sound reasons. Thus, Cyno’s job asks him to arrest those who violate the Akademiya’s rules and bring any illegal studies to a complete halt.

His position has made many researchers disdainful of him. They feel that his actions are “cutting off the path to knowledge” and prohibiting progress. Those who feel this way about the General Mahamatra are typically the ones who are pursuing knowledge in an illegal manner and doing so for the wrong reasons.

While his job requires him to remain focused and stern to ensure maximum efficiency, Cyno has been known to crack the odd joke on occasion in an attempt to ease the tension. But he does so in such a serious manner and so unexpectedly that his jokes are often completely misunderstood. Cyno then usually ends up trying to explain them but still does so in an extremely serious demeanor, which only leads to further confusion.

Outside of work, Cyno’s favorite hobby is playing Genius Invokation TCG, which he considers a form of art. He especially appreciates how players are able to demonstrate “creativity and variation” while also working within a strict set of rules.

The abilities of the powerful Electro character were shared by miHoYo in a post detailing all there is to know about the General Mahamatra and briefly demonstrated in a teaser trailer showcasing Cyno at work.

As a whole, Cyno’s abilities allow him to “deal continuous damage and gain more bonuses through precise operations.”

The regular version of Cyno’s attack is called “Invoker’s Spear” and allows him to perform up to four spear strikes in a row. When players perform the charged version of his normal attack, some stamina will be consumed and Cyno will lunge forward while dealing damage to opponents along the way.

“Secret Rite: Chasmic Soulfarer” is Cyno’s elemental skill and allows the Electro character to perform a swift forward attack that deals Electro damage to enemies along his path. This ability changes slightly when he has used his elemental burst and gained the Pathsworn Pathclearer state.

This special state causes Cyno to instead deal a Mortuary Rite of Electro damage within the surrounding area of effect. It also extends the duration of Pathsworn Pathclearer.

“Sacred Rite: Wolf’s Swiftness” is Cyno’s most powerful attack and calls upon a spirit to take over as he then morphs into the Pactsworn Pathclearer. While in this state, Cyno’s normal, charged, and plunging attacks are converted to Electro damage that cannot be overridden.

Cyno also gains an elemental mastery increase and better interruption resistance while his elemental burst is active. He cannot be affected by electro-charged damage while in this state and it will last up to 18 seconds or when he leaves the battlefield if he does so before the 18 seconds have passed.

When players choose to send Cyno out on a Sumeru expedition that lasts 20 hours, his “The Gift of Silence” passive ability will grant them 25 percent more rewards upon completing the expedition.

The Electro character also has the “Featherfall Judgement” ability, which causes him to enter the Endseer stance occasionally after first entering the Pactsworn Pathclearer state. If Cyno then activates the “Secret Rite: Chasmic Soulfarer” ability while in the Endseer stance, he then triggers the Judication ability that increases the damage dealt by “Secret Rite: Chasmic Soulfarer” by 35 percent.

If Judication is triggered, this ability will also fire three Duststalker Bolts. These bolts deal 100 percent of Cyno’s attack as brutal Electro damage.

Although the Electro character has not been released just yet, miHoYo unveiled all of Cyno’s required Ascension Materials. This means that players hoping to attain the five-star character can start gathering most of his required resources before he is released.

To fully raise all of Cyno’s talents, players will need to gather 1,652,500 Mora, six Divining Scroll, 22 Sealed Scroll, 31 Forbidden Curse Scroll, three Teachings of Admonition, 21 Guide to Admonition, 38 Philosophies of Admonition, six Mudra of the Malefic General, and one Crown of Insight.