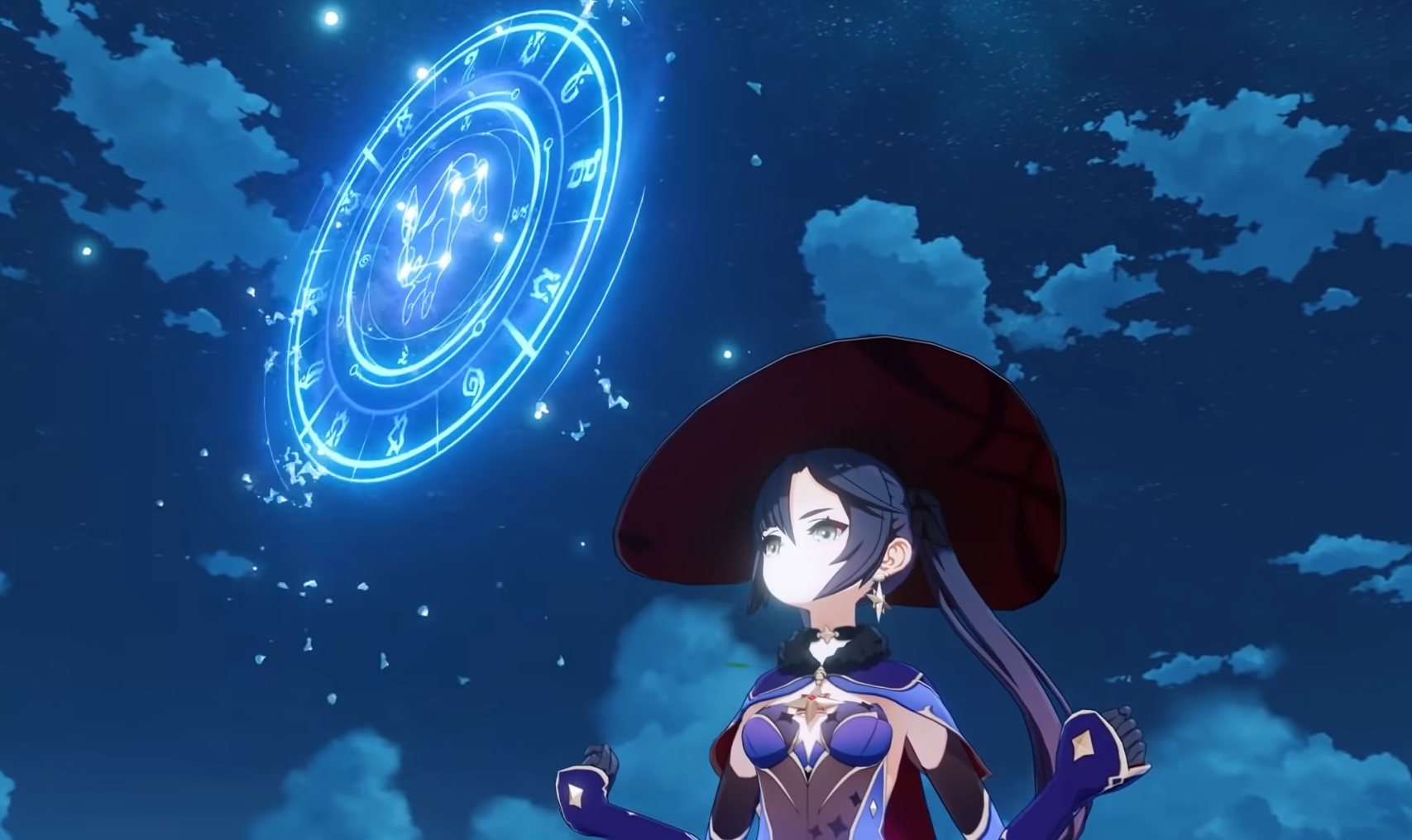 Mona Megistus, who is better known simply as Mona, is a powerful five-star Hydro Catalyst character capable of supporting and elevating her teammates’ abilities. She is a knowledgeable astrologist who combines her astrology abilities with hydromancy to practice both in a manner that is entirely unique to herself.

The five-star Hydro astrologist boasts a versatile and unique set of skills that allow her to coast through battle in extraordinary ways. While her primary function is as a support character who helps to bolster the rest of the party, Mona also has unique abilities that allow players to travel in a special way and distract or entrap enemies.

Mona is one of only two characters, the other being the five-star Cryo Sword character Kamisato Ayaka, who has a special cloaking sprint. This sprint makes exploring the world of Teyvat much simpler as Mona can glide right over any body of water and travel anywhere on the ground faster than other characters. It is also highly effective in battle as it allows her to easily escape from danger or sneak up on unsuspecting foes.

The Hydro characters’ elemental skill is quite an effective tool in battle because it both distracts and attacks foes. Her elemental burst is another unique skill she possesses as it will trap enemies in a pocket of destiny and fully immobilize weaker foes.

Although she was released when the game first launched, Mona remains one of the reigning champions in regards to the best support characters that players can recruit in Genshin. However, choosing the right equipment for the five-star catalyst character will greatly affect which elements of her abilities are bolstered and players should thus choose what they equip her with very carefully.

Best weapons for Mona in Genshin

Matching her unique witchy aesthetic, which is a favorite among Genshin fans, Mona wields a catalyst and her abilities are thus magic based. For the best results, players should try and attain a five-star catalyst for the Hydro character, but a number of great four-star options are also suitable for amplifying the Hydro character’s impressive skillset.

The five-star Skyward Atlas catalyst is the best choice for Mona. The special “Wandering Clouds” ability of this weapon increases all elemental damage by 12 percent.

It also allows all normal attack hits to gain a 50 percent chance of earning the favor of the clouds. If a normal attack gains this favor, it will then seek out enemies for 15 seconds and deal 160 percent attack damage to the foes it finds.

This Skyward Atlas ability may occur once every 30 seconds.

Another great five-star option for Mona is Lost Prayer to the Sacred Winds, which is an especially great choice for her due to its ability to amplify her already impressive evasive abilities. The “Boundless Blessing” effect of this catalyst increases movement speed by 10 percent.

A solid four-star option for players is The Widsith. This weapon has the “Debut” ability which grants the character wielding this weapon a unique theme song every time they arrive on the battlefield as long as 30 seconds have elapsed between each arrival. Each theme song is chosen randomly and has a unique effect.

The four-star Mappa Mare catalyst is another great option for Mona. Its special “Infusion Scroll” ability grants an eight percent elemental damage bonus for 10 seconds after an elemental reaction has been created. This can stack up to two times.

Best artifacts for Mona in Genshin

Mixing and matching different Artifact Sets can be a great way to build Mona. However, out of all the Artifact options in Genshin , only three sets are available that truly function as powerful options for Mona.

The best Artifact Set that players can equip Mona with is the full Emblem of Severed Fate set. The two-piece set grants 20 percent energy recharge.

The full four-piece set increases elemental burst damage by 25 percent of energy recharge. Up to 75 percent bonus damage can be granted through this set.

The two-piece Nobless Oblige set grants a 20 percent elemental burst damage bonus. The full four-piece set increases all party members’ attacks by 20 percent for 12 seconds after the character that this set is equipped to utilize an elemental burst. This effect does not stack.

In both the two-piece and four-piece versions, the Heart of Depth Artifact Set is a solid choice for Mona. The two-piece set increases Hydro damage by 15 percent.

The full four-piece set increases normal and charges attack damage by 30 percent for 15 seconds after an elemental skill has been used.

All Ascension Materials for Mona in Genshin

Because she was released when Genshin launched, most of Mona’s materials are easy to attain. Philanemo Mushroom is a Mondstadt local specialty, which means it can be found in abundance across Mondstadt. Specifically, players will want to climb all around the buildings in the City of Mondstadt, travel to the homes in Springvale, and visit the houses by Dawn Winery to gather these fungi.

Fighting Whopperflowers usually is not too difficult, although this foe can be somewhat annoying to defeat and may require a bit of patience. Players will need to regularly take on Whopperflowers for the various levels of Whopperflower Nectar that Mona requires.

The most challenging aspect of ascending the Hydro astrologist will be taking on the Oceanid, also known as the Rhodeia of Loch, for the required Cleansing Heart.

It will likely take players a few attempts before they understand how to beat this boss, but regardless, the Oceanid is much easier to defeat with the help of other travelers.

All Talent Materials for Mona in Genshin

As is the case with every Genshin character, one of Mona’s Talent Materials overlaps with her Ascension Materials. Thus, players will need to attain an excess of the loot that is dropped by Whopperflowers.

All various levels of Teachings of Resistance that are required for Mona’s talents can be obtained from the Forsaken Rift Domain on Sundays, Tuesdays, and Fridays. Players will also need to take on Andrius, the Dominator of Wolves, in the Wolf of the North Challenge challenge for the required Ring of Boreas.

Gathering all of these Genshin resources will likely take players some time, but is easy enough as long as players have a bit of patience.

Mona is a permanent character that can be obtained from either the standard “Wanderlust Invocation” wish banner or on any special featured character event wish banner. Thus, she is one of the easier five-star characters to attain and players may find they receive her when they lose a 50/50 on a featured banner.