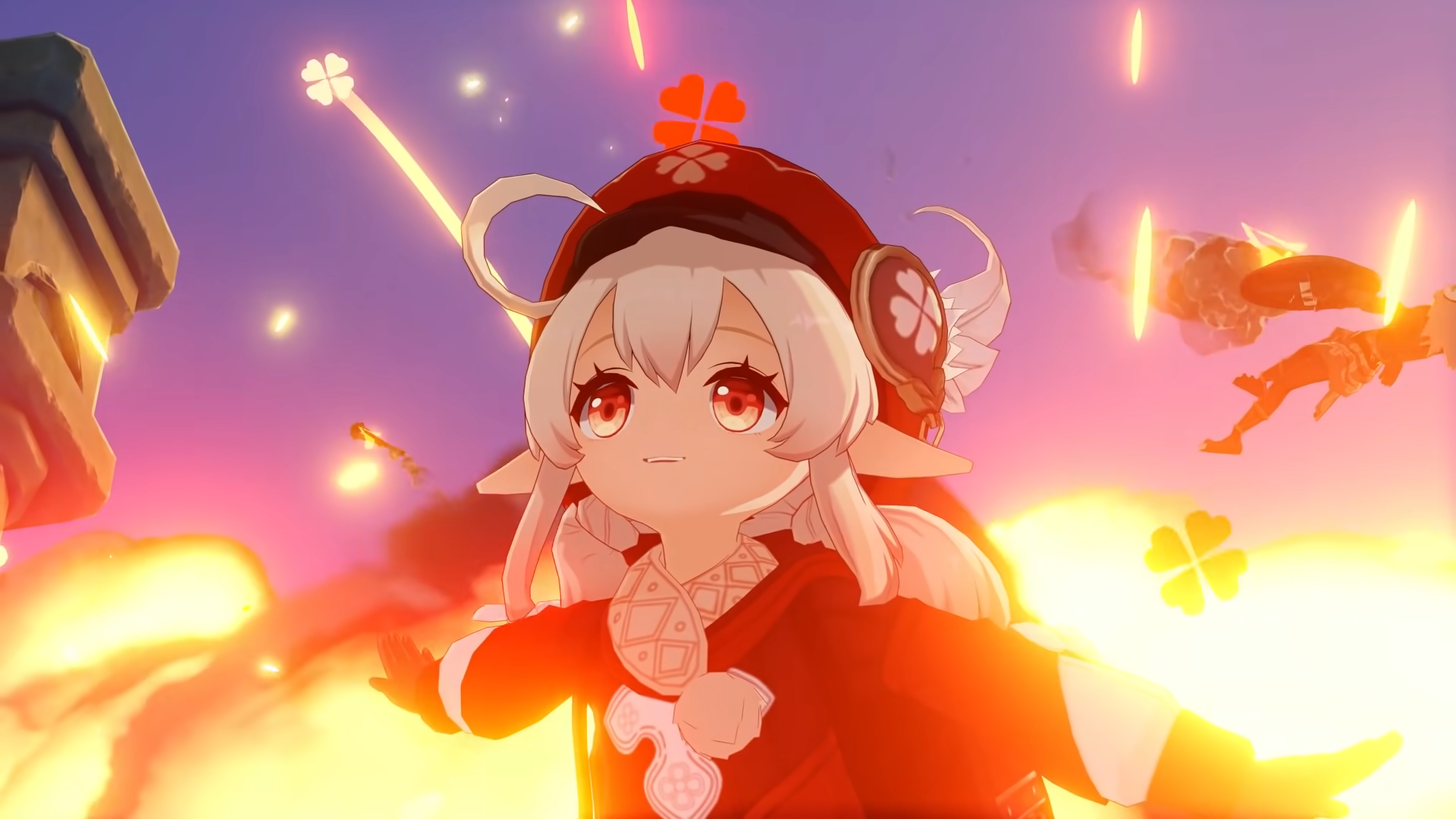 The energetic, mischievous, excitable five-star Pyro Catalyst character Klee is perhaps the most adorable character in all of Genshin Impact. Her childish demeanor matched with her unrelenting desire for mayhem mark her personality as easily one of the most intriguing in the game. Klee’s charming persona is matched with an equally impressive skillset as her Pyro abilities allow her to wreak havoc on her enemies and look downright adorable while doing so.

Considering the fact she is a child, the Pyro Catalyst character of course loves to play. Klee’s definition of playing just looks different from that of a regular child as she prefers to play with her explosives rather than regular toys.

Klee hails from Mondstadt and is currently under the protection of the Knights of Favonius because her mother, an adventurer named Alice, entrusted her to them. She has since become quite close to the Acting Grand Master of the Knights of Favonius, Jean, who is like a mother figure to her and her primary caregiver. Klee is also quite close to Albedo, who is like a brother to her, and is fond of Kaeya and confused but intrigued by Diluc.

The chaotic Pyro character is considered to be an official member of the Knights of Favonius but oftentimes gets in trouble due to her mischievous antics. She is regularly reprimanded by Jean, who generally puts Klee in timeout for a period of time to reflect on her actions before allowing her to roam free once again.

As is expected of a child, she generally utilizes this time to brainstorm new methods of mischief and oftentimes even comes up with ideas for new types of explosives while she is supposed to be self-reflecting.

When it comes to her abilities on the battlefield, the Pyro Catalyst character is a strong damage dealer who eliminates opponents with ease. Klee’s chaotic temperament and love for fire serve her well in battle as she makes an all-around strong and solid damage dealer.

The best role for Klee on any team is as the primary damage dealer. She can also make a decent support character when built right but her strong suit is as the one front and center dealing the most damage in every battle. Her catalyst of choice should thus be one that can amplify and bolster her damage output.

Generally, the best weapon for Klee is the five-star Lost Prayer to the Sacred Winds catalyst. This catalyst grants a 10 percent movement speed bonus through the “Boundless Blessing” effect. Increased movement speed is a great asset for Klee because it allows her to move around rapidly and flee while also dropping explosive damage everywhere she goes.

The “Boundless Blessing” ability also grants an eight percent elemental damage bonus every four seconds while the wielder is in battle. This effect will last until the character leaves battle or falls on the battlefield.

Another great option for Klee is the Skyward Atlas. This catalyst has the “Wandering Clouds” effect that increases the wielder’s elemental damage by 12 percent.

All normal attacks also have a chance to gain the favor of the clouds, which will seek out and target nearby enemies for 15 seconds to attack them with 160 percent of attack damage. This effect can only occur once every 30 seconds.

This four-star catalyst was designed specifically for Klee and was obtainable through the Midsummer Island Adventure event that occurred in the summer of 2021. Although there is currently no way to obtain it, players who did get it during the event will find that it is a solid choice for Klee and fits both her aesthetic and skillset perfectly.

Klee’s Artifacts should mostly focus on increasing the damage she deals against enemies. This means that players should primarily focus on aspects like elemental abilities, attack, and damage when selecting which Artifacts to equip Klee with.

The two-piece set grants the character that it is equipped with a 15 percent Pyro damage bonus. The full four-piece set increases the damage dealt by Pyro Elemental Reactions. Overloaded and Burning are increased by 40 percent while Vaporize and Melt are increased by 15 percent.

When an Elemental Skill is used and the full four-piece set is equipped, the two-piece set’s 15 percent bonus gains a 50 percent increase based on its original starting value for a total of 10 seconds. This effect can stack up to three times.

The two-piece set of Shimenawa’s Reminiscence grants the character that it is equipped with an 18 percent attack bonus. When the character that the four-piece set is equipped to utilize an Elemental Skill and has 15 or more Energy, they then lose 15 energy, and normal, charged, and plunging attack damage is increased by 50 percent for 10 seconds. This ability cannot stack and thus cannot be triggered again while it is already active.

Players seeking to improve Klee’s attack should equip her with the two-piece Gladiator’s Finale set because this will grant her an 18 percent attack bonus. However, players should not utilize the full four-piece set on her as its benefits only work for characters who wield a sword, claymore, or polearm.

The two-piece Gladiator’s Finale set should instead be paired with another two-set. One great option is to pair it with the two-piece Crimson Witch of Flames set as combined these two sets will greatly amplify her Pyro damage and attack abilities.

To ascend Klee players will primarily need to fight Samachurls to attain the various required levels of their Scroll loot. This foe can be found all across Teyvat which means this is generally fairly easy to do as long as players do so consistently.

Klee also requires Philanemo Mushroom, which can be found all across Mondstadt, and Everflame Seed, which is dropped by the Pyro Regisvine. Overall, the required materials for Klee’s Ascension are fairly easy to obtain for any player who is somewhat familiar with Genshin because Klee is an early game character who does not require anything too complicated or difficult.

One of Klee’s essential Talent Materials is also a required resource for her Ascension Materials. This means that players will need an abundance of the resource that overlaps, which is Samachurls Scroll loot.

Players will also need to regularly visit the Forsaken Rift Domain on Sundays, Mondays, and Thursdays to obtain the necessary levels of Teachings of Freedom. Facing Andrius, the Dominator of Wolves, in the “Wolf of the North Challenge” is also a must to obtain the required Ring of Boreas.

To maximize Klee’s potential by leveling up all of her talents to the highest levels players will require a total of 1,652,500 Mora, six Divining Scroll, 22 Sealed Scroll, 31 Forbidden Curse Scroll, three Teachings of Freedom, 21 Guide to Freedom, 38 Philosophies of Freedom, six Ring of Boreas, and one Crown of Insight.

As of July 2022, Klee is currently a featured five-star character on her special “Sparkling Steps” banner with an increased drop rate in Genshin. This is Klee’s third rerun and it will likely be quite some time, probably at least one year as this has been the pattern so far, before players have a chance to wish on her again.

Thus, players hoping to recruit the chaotic and adorable Pyro Catalyst character to their team should wish on her soon as her banner will come to an end on Aug. 2, 2022.