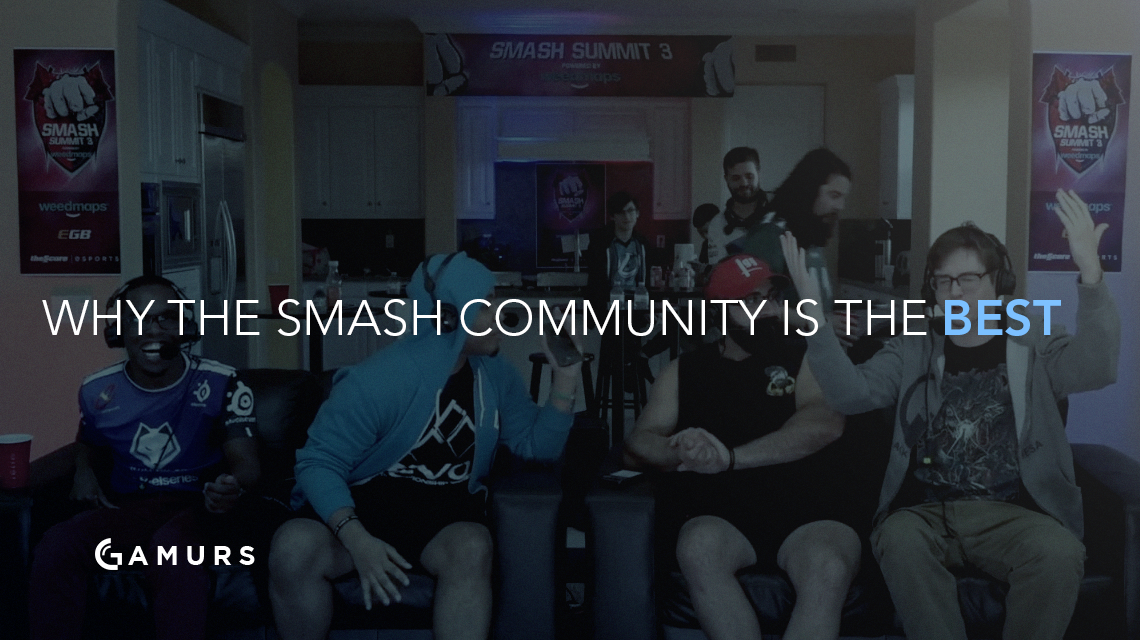 A big issue I have had with a lot of mainstream esports recently, aside from too many invite-only tournaments, is the distinct lack of interaction between the players and the community. Sure, you have games like League of Legends that have pro players topping the streaming charts on Twitch 24/7, but the connection between player and fan isn’t nearly as complete as it is with other esports.

Since the birth of its esports scene, the Smash Bros community has been one to impress. It, along with the Fighting Game Community (FGC), has been striving at making the player and the viewer as close as possible, which explains their success and monstrous fan base. With these esports, nearly every tournament besides a select few are open for anyone to compete in, which gives everyone the opportunity to play against their idols.

I recently went to a Smash tournament in Plano, Texas called Low Tier City 4 and I had never felt so involved with a community before. Everyone there was willing to help teach players and work towards making newcomers feel like they’re at home. Not to mention, the pro players that I had always looked up to were just walking around the convention center talking to fans and signing autographs.

The best part is, they didn’t look like they were dreading being there nor were they being rude to anyone in any fashion. A lot of the time, the players came to you and started conversation. I remember sitting and listening to another viewer say that they think X player is better than Y. As soon as that sentence was said, the Y player showed up and asked him why. Instead of getting upset or arguing about it, they had a genuine conversation.

This felt like a complete 180 for me as the only other esports event I’ve been to before was UMG Dallas, where I would say hi to a pro on the convention floor and often times the best reaction I saw was a head nod. I don’t follow the Call of Duty esports scene at all, but I recognized some of the players from friends or YouTube, but I felt no connection to them whatsoever. I still appreciated any form of interaction, but it felt ingenuine. I was constantly asking my friend I went with, who followed Call of Duty religiously, why it was like this, and his only response was something along the lines of “that’s just how the players are.”

A lot of Counter-Strike: Global Offensive tournaments have a designated time for players to sit at a table and sign autographs, but you don’t get longer than 30 seconds to say hi. Comparing this to my experience at LTC4, I got to talk to my all-time favorite player, Eric “ESAM” Lew, for a good five minutes before he had to go play. Immediately afterwards, I got an autograph from Gonzalo “ZeRo” Barrios, Nairoby “Nairo” Quezada and Juan “HungryBox” DeBiedma, all within four minutes of each other. Each player I talked to seemed interested in what I had to say and held a conversation until they had to go.

Another huge difference between Smash and other communities is how they handle animosity. Instead of players being upset at each other and bickering all the time, they settle it in game. Much like the FGC, Smash has money matches or even an event called the Salty Suite, where players can settle whatever dispute they have. More often than not, the winner brings the argument to a close and everyone moves on with their life. The best part is, none of the animosity is answered with anger. The fans, commentators and even the other players all love these types of events. If anything, things like money matches generate more hype for rivalries. Most other esports just have fans of both teams/players butting heads on Reddit or social media while the players themselves sit idly by until they play their rivals again.

Not only does the Smash community excel at community interaction, but they make the tournaments fun to watch from home. Every tournament, you’ll see an amazing rivalry being played out, some sort of hilarious money match or even listen to some of the best commentary esports has to offer. If there is any esport that is prided on commentary, it is Smash or the FGC. Odds are, if you have ever tuned into a Smash tournament, you immediately heard the voices of Bobby “Scar” Scarnewman or Kris “Toph” Aldenderfer. They are the pride and joy of Smash commentary because they are hilarious to listen to, yet very insightful to plays that are happening.

Smash Summit 3 just ended, and despite the fact that the only people at the venue were the players themselves, the commentators and atmosphere made it feel like you were right there with them. This tournament was run in such a fashion where the players looked like they were just chilling at their own house, having a huge Smash tourney with all of their friends. No one beefs with each other, the commentators talk about life and tell funny stories and everything just looks so casual.

What made this tournament so amazing is that despite the casual look, it was very much so a serious tournament in terms of competition. Some players were even saying that the type of atmosphere offered at Smash Summit is what makes the Smash community so amazing to be a part of. I mean, what other professional gaming tournament can you watch where you can see your favorite players playing an intense game of Mafia while laughing, then not even an hour later, be playing in the top-eight and providing high level competitive play? The answer is none.

A big issue to me is that every esport can’t be like the Smash community because the organizations or players simply don’t operate the same way. Since Smash is mostly a 1v1 game, you aren’t required to sit and practice with a team before game time. You practice with other players or fans. In LoL, for example, as soon as the players get done playing their game, they high-five audience members on their way out of the room and we never see them again until their autograph time. While they’re backstage, they’re practicing or reviewing gameplay. This isn’t the players fault at all, but rather Riot’s for the way they run their esport. It’s not like there are community ran tournaments that will have Cloud9 and Team SoloMid there to hang out with fans because that isn’t how LoL works.

I understand how much harder it can be for other esports to be treated like Smash because they are team based games and not solo based games. I don’t know of any Smash players who have a coach, a strict training regiment, live at a team house or are bound to any certain organization. Since that is how the esport was when it was formed, that is how it remains today. Not for consistency sake, but because it works. For example, I have seen many Smash players go from one organization to another, yet remain best friends with everyone they were with before. Smash even has organizations run by members of the community, like how Scar and Toph founded MeleeItOnMe, who sponsor a ton of the communities favorite players.

The whole community is based on friendship and growing the player-to-fan relationship, and I think that is why Smash is the best community esports has to offer.

What esports community do you think is the best? Tell us by commenting below or by tweeting Josh at @iEnglishBetter or @GAMURScom.