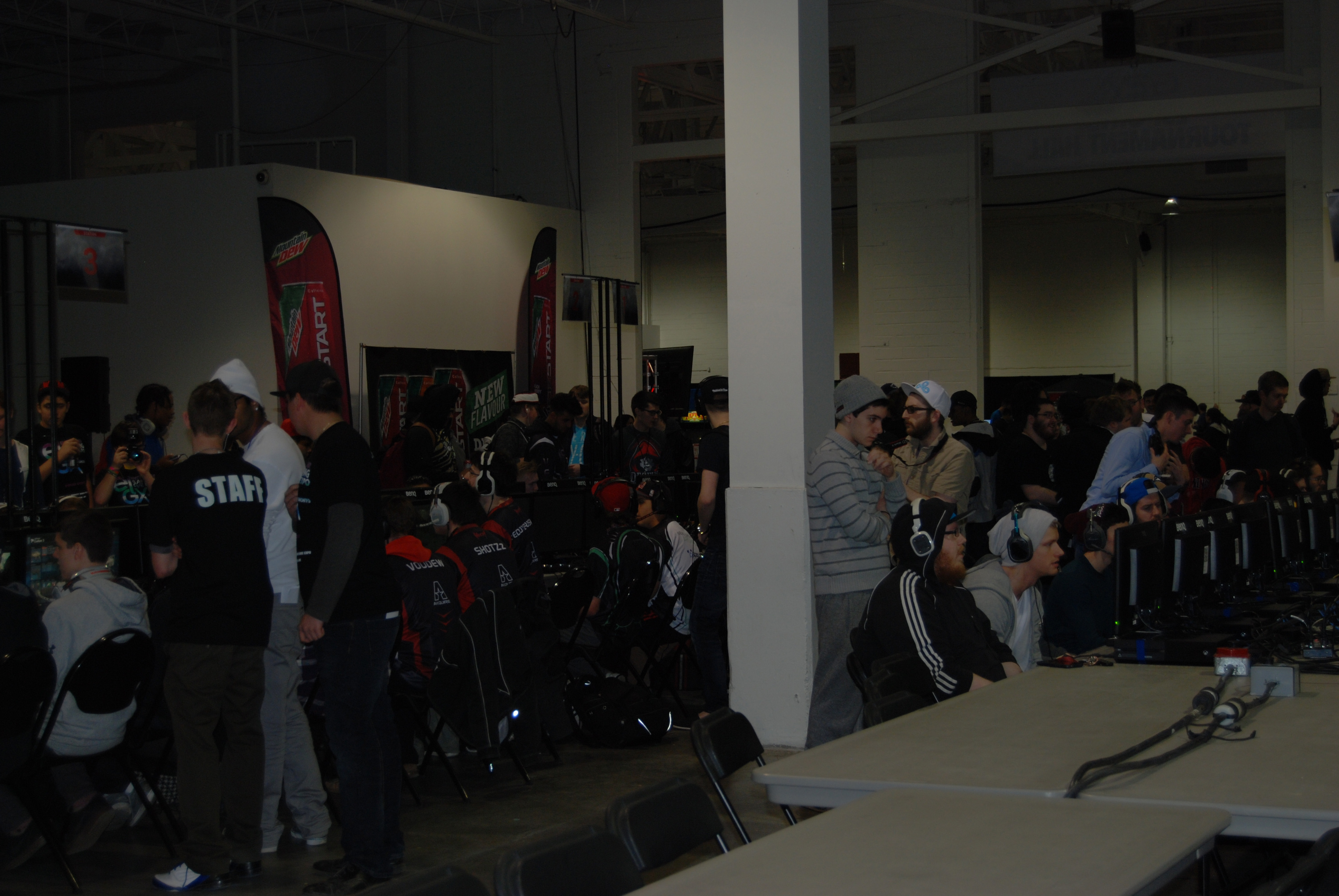 This weekend, I was fortunate enough to attend the 2016 Enthusiast Gaming Live Expo, or as it’s better known, EGLX. The event aimed to be a large scale gaming convention, covering competitive gaming alongside panels and an exhibitor floor. With the preface that I was only able to attend on the Friday and Sunday, here are my thoughts on the event.

Upon walking into the event, you were greeted by several booths and exhibitors akin to what you might find at a convention like Comic Con. For simplicity’s sake, you could basically break down every exhibitor into one of three categories: merchandise, art, or game showcase. The typical things you would expect from a convention floor. The floor worked great as a place to take a break from the competitive action just a short walk away. You could have a decent look at everything in less than 20 minutes, assuming you didn’t play any games or talk to any of the exhibitors showcasing products. But for me, this was the problem with the attraction. While it was great for someone like me, who spent the majority of both days attended sitting in one spot watching games or talking to competitors, billing the event as a convention seemed sort of disingenuous. There seemed to be a lot of people who were there only for the convention side of things, mainly parents with younger children. These families seemed to be confused and didn’t know exactly what was going on. At one point I even saw a young boy run up to a GameCube in the Smash practice section – he didn’t understand why there were no controllers for him to play. Another case of this was the cosplay table. Enthusiast Gaming invited a sizable amount of cosplayers to the event, and from my perspective, they all seemed to be recognizable names, the most notable being Meg Turney. While I am no expert in cosplay, I have been to conventions that featured this sort of thing before with some of these women in attendance. Typically there are quite a lot of people who want to talk to them and take photos, but from what I saw they looked rather bored this weekend with little support. The floor also featured an interesting arcade area that saw quite a bit of use. Collecting and displaying classic and modern games, it was a neat

addition to the convention. I didn’t have the chance to view the panels that were put on, but just looking at the list of what they had this is the one aspect of the convention that I think seemed very promising. They had some amazing names doing panels, groups like Team Four Star and Cinemassacre as well as various Q&As with guests. Despite the favourable talent in panels and the arcade, however, I still think it failed as a straight convention. Perhaps I’m just spoiled from attending some of the great events that Toronto has historically had such as Fan Expo, Comic Con North, and Anime Expo, but this just didn’t seem to cut it. From my perspective, it seemed to be a sideshow for the competitive aspect of the event, which wouldn’t be a problem if it didn’t bill itself as “[Canada]’s first foray into the world of large-scale gaming conventions”. There’s always next time. This year’s event was a lot bigger than last year’s EGL, so hopefully they’ll make the convention side of things bigger and better in the future.

Now for the important part: the competitive aspect. EGLX hosted tournaments for the following games: Street Fighter V – $500 Pot Bonus for Open, $2,000 Prize Pool Invitational Super Smash Bros. Melee – $5,000 Singles Pot Bonus, $1,000 Doubles Pot Bonus Super Smash Bros. Wii U – $5,000 Singles Pot Bonus, $1,000 Doubles Pot Bonus Call of Duty: Black Ops 3 – $10,000 Prize Pool Halo 5: Guardians – $10,000 Prize Pool Hearthstone – $10,000 Prize Pool Dota 2 League of Legends Counter-Strike – $10,000 Prize Pool There were also community run tournaments for Super Smash Bros. 64, Ultimate Marvel Versus Capcom 3, and Mortal Kombat X. According to the EGLX site, each game offered a $250 prize pool and didn’t require a competitor pass to play. While a regular attendee would make their way through the front entrance and walk through the convention hall, a competitor would instead have their first glimpse of the event through the Esports Hall. Located at the back of the event, it was an area for players to set up their equipment, relax with free energy drinks provided by Mountain Dew, play a few friendlies to get warmed up, and in most games, play their matches. On the first day of the event, the area was blocked off from the general public – only those with a competitor or media pass were allowed in. There was a problem with this, though: They only had security posted at one entrance. One could be turned down at one entrance and then walk around the corner into the Smash area, and through there, back to the hall they were originally denied from. That blocked off area was also the only place to watch many games on the first day. Without getting in, you weren’t seeing much. I suppose they realized their mistake because on the later days they moved the “competitor area only” to include the “bring your own PC” environment. Every single tournament experienced some sort of delay or technical difficulty, however, this isn’t necessarily a big deal. Each tournament was run by a different group of people, and some were run by organizers completely separate from the event. Delays and problems are common for events of this size, it made sense that there were problems and luckily they were sorted out in a timely manner. What didn’t make sense to me was how little focus was put on Smash. While it wasn’t formally a Smash event and all games should be theoretically treated equally, anyone who saw the sea of people watching the Melee could tell you that it was, in fact, a Smash event. The amount of people watching the Singles bracket when it was on the side stage at any given time was still higher than the number of people watching every other game combined. Possibly times two. Thus, it seemed rather ridiculous to me that the pot bonus for Melee was half of the prize pool for games that literally had random locals playing in the finals.

Smash was the only game that had legitimate international competition. Four of the five Gods (although Armada was feeling under the weather and didn’t play singles) as well as TSM Leffen and several of the other ‘demigods’ were in attendance, though Smash did not receive its own stage. It would be hard to ask for a more competitive event. Compare it to Halo 5 to see how ridiculous things were. In Halo, a team of notable players, playing under the Fatal Ambition tag, showed up and easily demolished the competition. I’m almost certain they didn’t drop a single map the entire tournament and managed to win $6,000 to split amongst themselves, all the while beating a bunch of nobodies. This isn’t to say that TizOxic, Burton, and the boys didn’t deserve to win something, it’s just kind of frustrating to see them walk away with that much prize money easily while Melee’s total pot bonus was less than that while all of the top three placing players were Gods. Every game received a roughly equal size environment for a side stage, except for Hearthstone which had an entire stage area to itself.  Once again, I feel like Smash was slighted in this regard, as on Sunday, the area around the Melee stage was completely flooded with people. Security even showed up at several points to maintain the perimeter because people were sitting on the floor just to get a chance to see that action. Meanwhile, the most action the Halo stage got all weekend was people taking the chairs from it (while the finals were going on) in order to use them to watch Melee. On top of that, the main stage featured CS:GO with almost no one in the audience. It was rather naive to go with the equal approach. I would hope that if they could do it over again, the event organizers would give Melee its own space in the same way that Hearthstone had and rework main stage priority. Altogether, the weekend was certainly enjoyable but could have been better. I look forward to what Enthusiast Gaming brings with their next event! Did you catch the event, live or on stream? Let us know how it was in the comments below and remember to follow us here at eSports Guru for all your general esports needs! Patrick Cowley can be contacted through email at [email protected] or on twitter, @PtrckCowley.