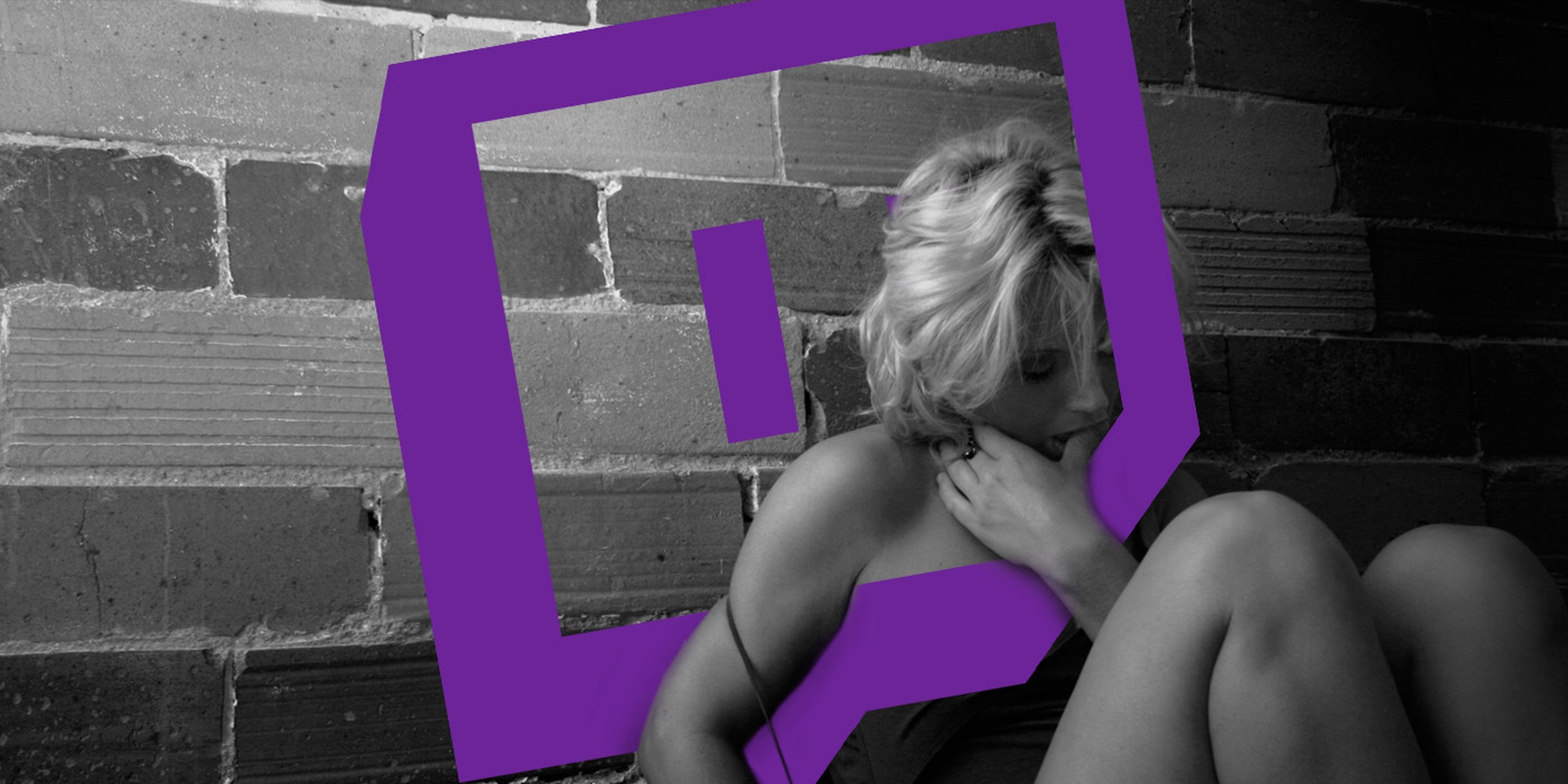 The site now prohibits users from going on camera either partially or fully naked, or wearing “sexually suggestive clothing—including lingerie, swimsuits, pasties, and undergarments.” It also clarified that streamers with full naked torsos will get suspended, regardless of whether they are male or female.

“Twitch employees and global moderators reserve the right to suspend any account at any time for any activity that we deem inappropriate or harmful,” the company noted.

The new policy, which goes on to joke about the best ways to hide one’s offending body, is vague and troubling. Since it mentions nothing about intent, the policy fundamentally targets streamers who fall outside of Twitch’s narrow standards of appropriate clothing and behavior.

Twitch wants to be taken seriously

Video game streaming has been on the rise for the past few years, and Twitch positioned itself early on as the industry leader. Its acquisition by Amazon earlier this year saw the company valued at just under $1 billion, and it coincided with a sudden shift in the way Twitch handled copyright compliance. The bottom line is that Twitch sees its potential in the media sphere, and wants to carve out a place for itself to grow over the next decade.

That means conforming to already-held standards in the media industry. Addressing musicians’ rights to their music was one step. The new dress code policy is another.

On the surface, it’s not hard to see the company’s point-of-view. Twitch regards itself as a gaming site first, and beyond a few podcasts and several live event streams, a vast majority of its content is comprised of direct feeds of video games. This alone justifies a policy against “non-gaming” content, such as news programs, live sporting events, or nudity and pornography in the case of the new policy.

But the wording of the policy is important. Twitch is prohibiting more than just pornographic material, it’s dictating how streamers dress. “Sexually suggestive clothing” is a clear point-of-the-finger at streamers who are allegedly trying attract viewers with more than just gaming. There’s a commonly held belief that some streamers are actively out to get ad revenue with sex, which is supposedly obvious by their dress and behavior.

Enter Misha “Scyx17” Lynn, a professional female gamer and Twitch streamer. She got banned from the site in September for “inappropriate sexual behavior.” In the image below, you can see her being a little flirty with her viewers while wearing a swimsuit top. It’s hardly pornographic, but it’s also not directly related to gaming. For her part, Lynn made no attempt to get around the ban, simply saying “I fully intend to change the content of my stream to fit what is acceptable on Twitch.”

Her ban ended earlier this month, and she resumed streaming on Twitch, only to be banned again in just a short amount of time. Now, she has turned to HitBox, a smaller rival to Twitch with much less policing.

However, Lynn stands in stark contrast to some streamers—often men—who have avoided such bans for similar actions. One such gamer, Smite pro Drew “Lassiz” Boyd, is well-known for streaming without his shirt on, and he’s never been banned. Will he be kicked out under the new policy? By the strict letter of the law, he should be, even if almost all of his viewers are watching the stream for his play, not his shirtless upper torso.

Either way, it’s clear that the policy is a concrete step in the website’s fight keep gaming at its core business. But the vague wording and inconsistent enforcement in the past, should be cause for concern. What’s more, the policy might bring with it some unintended consequences—along with a glaring conflict of interest.

“Sexually suggestive” is too subjective

This broadcast via Twitch. That’s a short dress. But is it too short? Is it sexually suggestive? Does it violate the new Twitch policy?

Quirico, a consummate professional, is clearly dressed appropriately to host what is a pretty major event. If we’re going by the intent of the policy— to keep Twitch about gaming—then a puritan could easily argue the dress goes too far. She could certainly wear something less revealing, just like a streamer can always wear something less revealing.

And in fact, what if another woman were dressed similarly as she streamed from her bedroom? Would she be using sex to get viewers? This is where Twitch’s policy starts to run into problems, because it says nothing about intent. Clothing styles vary around the world, from person to person, and the decision to wear a slightly revealing outfit is just as likely (if not more likely) to be a style choice than an attempt to titillate viewers. Twitch is potentially punishing streamers based on its own assumptions about what’s “sexually suggestive” and what’s not, views that don’t necessarily align with a vast swath of its userbase.

It makes sense that Twitch wants to keep sex out of its broadcasts. But even as it tries regulate the actions and clothing of its streamers, it’s letting them play games without any similar kind of policing. If Twitch is trying to make it to the big leagues and be taken seriously, then at some point it’s going to have to acknowledge the obvious contradiction built into its new policy: the games themselves display a lot more sexually suggestive themes than most streams.

The most popular streams on Twitch are often esport titles like Dota 2 and League of Legends. Those games both have playable characters that dress exactly counter to the policy that Twitch has just implemented.

The site does recognize this. In another part of the policy, it notes that nudity can’t be a core focus of the game or stream, and that modded nudity isn’t allowed. But:

Occurrences in game are OK so long as you do not make them a primary focus of your broadcast and only spend as much time as needed in the area to progress the game’s story.”

Games with heavy sexual content, such as Catherine, or heavily publicized sex scenes like Mass Effect, are fine under these policies. The core focus is on the game, which is of a sexual nature, but because it’s a game, it’s okay.

In other words, if the game doesn’t intend to be all about sex, it’s OK. So why doesn’t the same generous policy extend to a woman in a swimsuit top or a dude without his shirt on? It’s unreasonable for the policy to assume that all streamers who wear inappropriate clothing don’t have a core focus on gaming. Calling out skimpy clothing and swimwear, without a nod to the core focus of the stream and intents of the streamer, is unfair and harsh.

Games can be sexualized. And there’s also a culture that has been built around gaming that includes, you guessed it, sexuality. There are similarly dozens of ways to share gaming experiences with others, and just like the games themselves, sometimes those get a little saucy. Perhaps the most relevant example is cosplay.

Cosplay, to put it simply, is dressing up as a character in a work of fiction. And it’s a much-beloved gaming tradition that can be seen often at any gaming convention or esports tournament. Sometimes, people went to dress up like the sexy characters they play or see games. One great example is professional cosplayer Jessica Nigri, who below pays tribute to the Mad Moxxi character from the Borderlands series.

Is this kind of clothing not allowed anymore on Twitch? Should streams of gaming conventions skip over cosplay competitions that often occur during the event? What about if a streamer wants to cosplay and wear something like the above while streaming? Is that worthy of a ban? It’s certainly sexually suggestive.

And on another level, what about themes within gaming culture that overlap with other cultures that are similarly sexually suggestive? Anime, for example, often pushes those boundaries, and is no large feat to find anime-style drawings of video game characters that are sexually suggestive.

Here’s a screengrab from Twitch user Sissorstream. You can see that she is dressed conservatively. But there’s an anime drawing on the right that could be sexually suggestive, depending on who you ask. Does this cross the line? Is she utilizing the same tactics that Lynn and others used to exploit more viewers into watching them?

You can make arguments both ways, for both Sissor and Nigri. But the bottom line is that the vagueness of the new policy opens doors that could end with legitimately contributive members of the gaming community ostracized.

Traditional Media is sexualized already, why should gamers be held to higher standards?

Twitch’s drive to be seen equal to television broadcasting is admirable, but would this kind of policy stand on any television station? Sure, there’s some children’s networks that actively avoid the hint of sex (even then, a swimsuit top would probably be OK), but most stations gladly broadcast shows and commercials portraying women and men in skimpy outfits.

Ripped bods and ample cleavage are all fair game when it comes to television broadcasting. So why should gamers be held to higher standards?

What’s more, Twitch has built-in commercials over video streams. Some of those commercials are bound to break from the standards set in Twitch’s Rules of Conduct—sex, after all, sells, and it’s one of the most tired gimmicks in advertising (just ask GoDaddy or any American beer company). When those inevitably appear on a channel, they’ll send conflicting messages to streamers: You can’t personally benefit from sexualized content, but Twitch advertisers sure can.

Right now, Twitch’s new policy is hostile to gaming traditions. But as the biggest name in the business, it’s handcuffing the industry from using the same strategies as television broadcasting and advertisers. Sure, Twitch has the right to ban anything it wants on its own platform. But the minute its moderators become moral police, its users are going to start fleeing elsewhere.