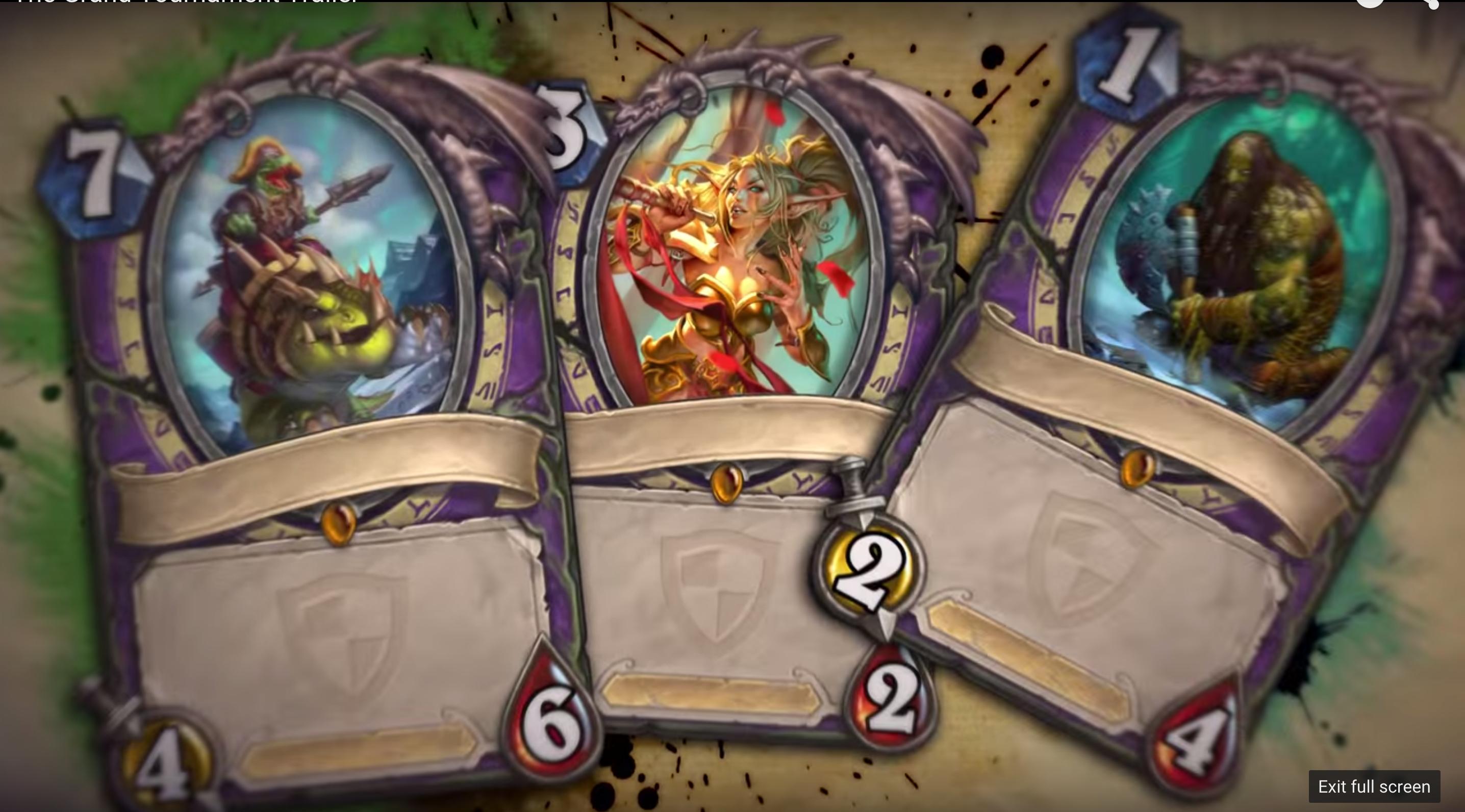 It’s been about two weeks since the release of The Grand Tournament, the latest big Hearthstone expansion. That means the immediate post-expansion meta is slowly coming into view.

This process always seems to work the same way. There’s the beginning, where everyone was trying obvious, exciting new decks like Totem Shaman and amped-up Midrange Paladin, the middle, where people realize their win-rate was still best with Patron Warrior, and now the unpredictable, off-the-wall period where people spin under-recognized cards like Mysterious Challenger into shocking top-tier choices. If that’s confusing, don’t worry, I’ve got your guide right here. Here’s where the Hearthstone meta stands, 130 cards heavier.

Nobody thought Mysterious Challenger would change the game. It’s a six mana 6/6 that, when played, puts a copy of every secret in your deck into the battlefield. Sure that looks powerful, but it’s Paladin. Nobody plays Paladin secrets! They’re all one mana and totally low-impact. Who cares?

Okay, we were very wrong. You can make any card good if you give it enough of a discount. You know those staple Mage secrets like Mirror Entity and Duplicate? They were hardly ever run in vanilla Hearthstone because everyone thought they were overpriced at three mana. Then Mad Scientist came out and people could put secrets into play for free, and now those spells are inescapable. It’s the same situation with Mysterious Challenger. Yes, one-mana Paladin secrets are hardly worth a card on their own, but if you’re able to put five of them into play for free? Well, that cannot be ignored. Mysterious Challenger isn’t just a six-mana 6/6, it’s a six-mana 6/6 that can give you three, four, or even five extra mana worth of value.

Aggro Paladin was already pretty good, but now it’s ridiculous. If you’re contending on board by turn six with a Mysterious Challenger in hand, you pretty much win the game. The Redemptions, Noble Sacrifices, Competitive Spirits, and Avenges are too tough to chew through all at once. And since a lot of these decks are running double copies of all those secrets, it opens the chance for a backbreaking turn-six Mysterious Challenger turn-seven Mysterious Challenger combo that will probably put your opponent in the hospital.

Also, people are running Secretkeeper in this deck. That’s right, Secretkeeper, perennially the biggest joke in the game. And it’s good! Like, quasi-Undertaker good! Never say Hearthstone is a static game.

Finally dragon synergy is paying off! Remember back in Blackrock Mountain when Blizzard made a big deal of pushing their brand new tribal type? It fell on its face because a 30 card expansion isn’t quite enough to shake things up. However The Grand Tournament introduced a handful of new dragons that were exactly what the archetype needed. There’s Chillmaw, the anti-aggro legendary that seems designed specifically to kill Grim Patrons, Alexstrasza’s Champion, a fantastic new Warrior card that morphs 3/3 charge for two mana, and of course Twilight Guardian! A 2/6 for four that turns into a 3/6 with taunt if you’re holding a dragon. A big, strong, midrange dragon with taunt! Finally Dragon decks can thrive!

But as good as Twilight Guardian has been, the real MVP of the set is Wyrmrest Agent. It’s a two-mana Priest card that buffs itself into a 2/4 with taunt with a dragon in hand. That’s super strong. It’s a two-for-one machine that curves perfectly into your equally strong Blackwing Technicians and Twilight Guardians. There’s a dream Dragon Priest draw where you play a 2/3 on turn one, a 2/4 on turn two, a 3/5 on turn three, and a 3/6 on turn six. At that point you’re basically just playing better cards than your opponent each turn, which is a good way to win games. Welcome Dragon Priest, and welcome dragon decks. We’ve been waiting for you for a long time.

Way back in the mists of time there used to be this thing called “Midrange Shaman.” It was a totally solid, completely viable archetype that, while never overwhelmingly powerful, was always a decent pick in constructed or tournament play. Unfortunately, with Goblins vs. Gnomes Midrange Shaman got powercreeped to hell, with cards like Piloted Shredder completely outclassing Shaman staples like Feral Spirit. Within a couple of months the Shaman class faded into obscurity, which made us all very sad.

Things have changed with The Grand Tournament, however. Blizzard has gone out of its way to make Shaman viable again. It’s given the class some of the best cards in the set. There’s Totem Golem, a meaty 3/4 for an insanely discounted two mana with an overload. There’s Tuskarr Totemic, a three mana 3/2 that summons a random totem from the entire game—boring if it’s Wrath of Air, completely bonkers if it’s Mana Tide or the aforementioned Totem Golem. There’s also Thunder Bluff Valiant, a contender for the best Inspire minion in Hearthstone with its ability to buff totem attack values by two every time you hero power.

All of these cards were basically slotted into the old Midrange Shaman deck. The principles of flooding the board, buffing your small guys with Flametongue Totem and Defender of Argus, and shutting down a comeback with crazy tempo cards like Hex and Fire Elemental are all the same. Add in a cheap way to weaponize your totems and one of the best two drops in the game, and all of a sudden Shaman sports a solid vanilla deck. Welcome back, Thrall!

Yep, Patron Warrior is still strong. There were some faint hopes that the release of The Grand Tournament would curb the onslaught, but nah. The best deck in the game is still the one that can routinely burst your opponent down from 30 on practically any board state. Even better? Patron Warrior has a good matchup against Secret Paladin, the only other truly game-changing deck we’ve seen over the last couple weeks.

At this point Blizzard needs to think pretty seriously about nerfing Patron. It’s not going to disappear because Twilight Guardian matches up well. You have an archetype that kills everything except other Warriors. It’s super hard to punish, or counter, and you spend pretty much every game hoping they don’t draw the six cards that can kill you. That was Miracle Rogue, remember? “Hooray! I won because the Auctioneers were in the bottom third of their deck!” Miracle Rogue was shafted by Blizzard because it didn’t seem fair, and I think Patron will follow suit in the next couple months.

In the meantime, there will be Patrons. They will destroy the cool exciting decks you’ve cooked up, and you will cry.

Midrange Paladin takes a backseat to Secret Paladin, but it continues to be pretty strong. The new additions post-The Grand Tournament are mostly Justicar Trueheart and Murloc Knight.

Yes, a murloc card is being run sans any other murlocs in a Paladin deck. We’ve destroyed the world.

Seriously though, Murloc Knight might be the best inspire card in the set, which obviously has something to do with Paladin being the best inspire class in the immediate Tournament aftermath. If you don’t remember, “inspire” is the new keyword Blizzard added that triggers minions to do certain things after you tap your hero power. So, if you have Murloc Knight on the board, whenever you summon a guy the Knight spawns any random murloc from the entire game. That doesn’t sound like much because murlocs are pretty fragile, but you’re going to average a 2/2 which is really good. When you compare it to other inspire effects, like, say, Boneguard Lieutenant’s measly ability to gain one health, Murloc Knight looks pretty freaking strong.

So, when you compliment the ability to get a random 2/2 token with the ability to get a 1/1 token, you’re pretty happy. What pushes Midrange Paladin over the edge right now, however, is Justicar Trueheart. Trueheart buffs Paladin’s hero power to summon two 1/1s, which cannot be underestimated. An army of dudes, an army of murlocs, and exceedingly easy Quartermaster combo potential. Midrange Paladin will get filtered out in super-aggressive metas, but when things slow down it fights a great war of attrition.

Handlock is running pretty much the exact same list you saw pre-The Grand Tournament. There have been some occasional experiments with Wilfred Fizzlebang, but nothing has stuck. Druid hasn’t changed too much outside of the no-brainer additions of Living Roots and Darnassus Aspirant, and I swear one of these days someone is going to realize how good Soul of the Forest can be in these token decks. It feels like the only variation of Mage people are playing is the relentlessly viable Mech Mage, which has added pretty much nothing to decklists since the expansion. Literally nobody is playing Rogue and that makes me sad, but I wouldn’t give up on Beneath The Grounds, I still feel like that card could frame a competitive archetype. And straight up, the only new Hunter card I’ve seen getting play is Bear Trap. Sorry Lock and Load, maybe someday.