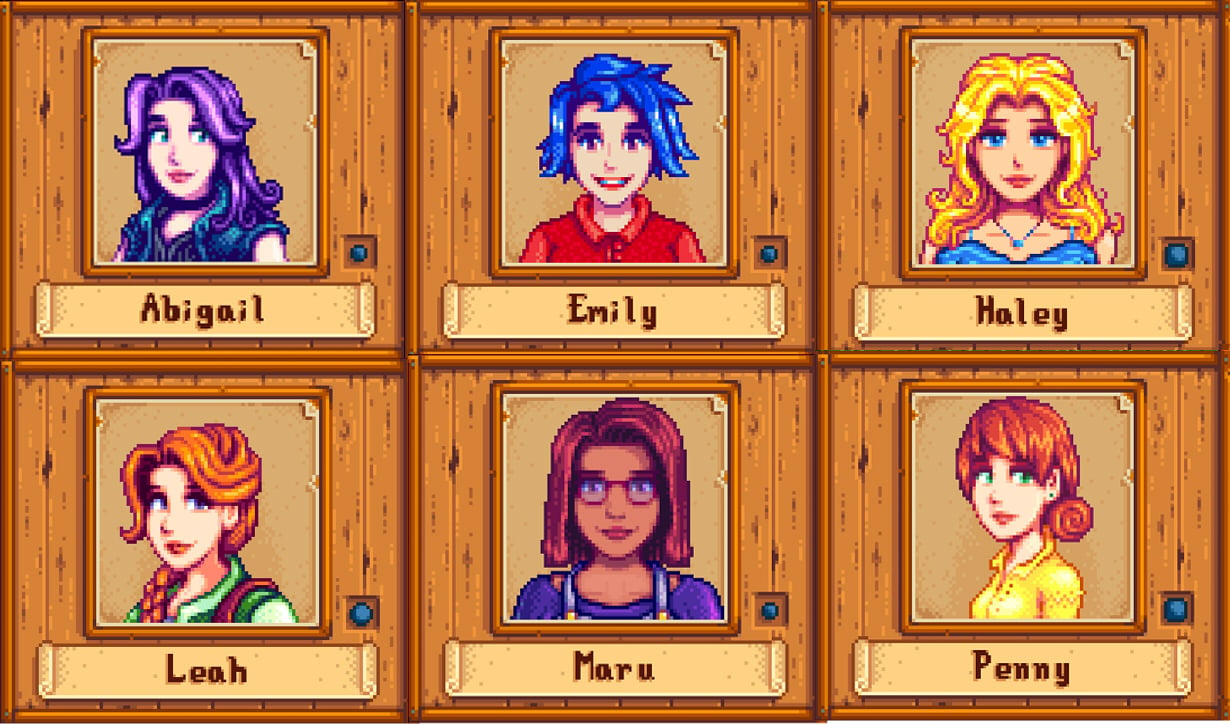 Running a farm in Stardew Valley can be a lonely business. While you do have your cat or dog and your farm animals to keep you company, it’s not unusual to wish you had someone else around to help you take care of the farm and make your house a home. Thankfully, the game allows players to romance several characters and eventually choose one to marry.

If you’re looking for a wife, you’ve come to the right place. Choosing from among the six bachelorettes can be tricky and overwhelming, but it doesn’t have to be. All spouses function exactly the same, but each has their own personality and decoration aesthetic that they bring to your house after marriage. We’re ranking all six of the bachelorettes based on who makes the most personable partner for your farm.

Haley is, by far, the least interesting of the bachelorettes. Sure, she might develop a little bit and become less conceited as you get to know her, but why would you want to do that when one of the first things she tells you is that being a farmer looks boring? She has very conventional looks that don’t make her stand out from the crowd, and when she moves in with you, she makes half of your house tacky and island-themed. Before she marries you, she lives with Emily, who is honestly a much better all-around wife choice.

Maru is already several steps above Haley just by sheer inertia. She’s cute, smart, and has interesting mechanical hobbies. When she moves into your house, she turns her room into a fun space- and astronomy-themed tinkering zone. Her only detriment is that she’s rather blunt and impersonal until she gets to know you, which makes befriending and romancing her a little less attractive, at least initially. Her house is also a long way from yours, making actually finding her tricky on most days.

Marrying Abigail is the closest you can get to having a goth girl for a wife in Stardew Valley. According to her official description, she enjoys visiting the graveyard alone and looking for frogs while it’s raining, both of which are acceptably quirky hobbies. She also reportedly enjoys occult activities–maybe she could commune with your ghostly grandfather? In any case, she gets knocked down a little for her design sense: her room in your house looks like an aquarium, but it also includes a drum set and a giant sword, the combination of which verges on unacceptably quirky.

Penny cracks the top three simply for sheer adorableness. Her hair is literally a cinnamon roll! She’s also a very sweet and kind person, as evidenced by her taking the time to teach and entertain Pelican Town’s children on most days. If you’re not a fan of kids, the constant stream of little ones following her around might be a detriment. Otherwise, Penny is a sensible, soft-spoken choice for a farm partner. Her room includes some very unassuming bookshelves and potted plants, so if you want to look as normal as possible, she’s the way to go.

Emily is Haley’s sister, and she’s superior in just about every way. She wasn’t a marriage candidate until ConcernedApe made her romanceable following pleas from the community, which proved the power of gamer thirst. As evidenced by her job at the Stardrop Saloon, Emily knows how to make a mean drink, and she also enjoys sewing her own clothes. Her room is a little ostentatious, particularly the sickening cute pink heart decoration, but her open and fun personality more than makes up for it.

Leah is the best bachelorette in Stardew Valley, no contest. She’s normal without being boring, smart without being snooty, and absolutely adorable. Seeing her signature swoop of hair come walking down the valley instantly generates joy. Her passion is art, and when she moves into your house, she’ll turn her room into a fun art corner. You don’t have to worry about her warming up to you—she’s already nice when the game begins. It’s hard to go wrong with Leah.