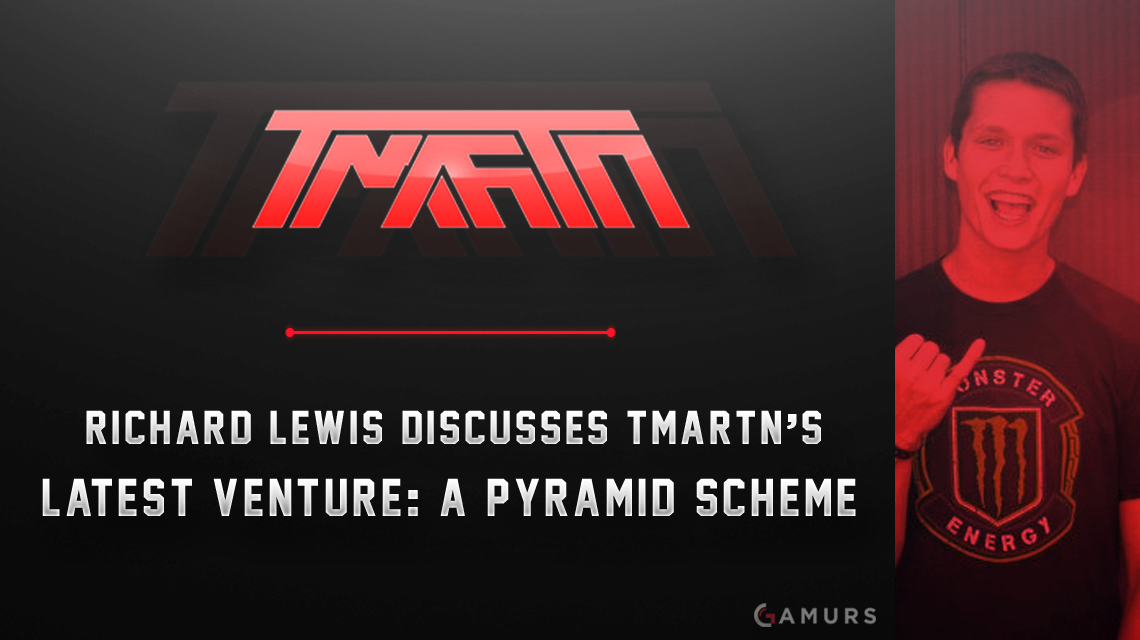 TmarTn made various headlinesrecently when he and several others were caught in a scandalinvolving a Counter-Strike: Global Offensivegambling website that they ownedbut were not upfront about. In fact, TmarTn made videos claiming tohave stumbled across the website, called CS:GO Lotto, even though he himself served as its owner.The situation led to a now popular phrase “Hey I just foundthis cool new site…”. TmarTn initially went intodamage-control mode and attempted to put disclosures on his videosafter the fact. Though the controversy has died down, TmarTn is nowinvolved in a class-action lawsuit. Soon after the news wasreleased, CS:GO’s publisher, Valve, sent cease-and-desist letters to manywell-known and wildly popular CS:GO gambling websites.

As the video explains, TmarTnrecently posted a video titled “No Infinite Warfare Collector’s Edition?!+ HUGE IW/MWR GIVEAWAY!” and in the description mentioned givingback to his fans. Though the video has now been taken down, hetalked about a new app called “United Games” and told his fans that he is anaffiliate and they should sign up for it.

This is where the story getsinteresting. United Games turns out to be an upcoming sportsbetting app where users can bet on live events with in-game tokensthat can be purchased. Accumulated tokens can later be used toobtain real prizes. Though this model is not illegal and is reallyan evolution of fantasy sports betting, TmarTn denies that this isa form of betting.

TmarTn tweeted to EightThoughts, “…United Games has NO betting factorwhatsoever.”

You’d think that after theCS:GO Lotto fiasco, TmarTn would step away from any sort of bettingwebsite or app. However, this is not why videos were made on thesubject.

As he apparently mentioned inhis deleted video, TmarTn is an affiliate of United Games. As anaffiliate, it is expected the TmarTn would benefit in some way byadvertising the app. But the United Games affiliate program isquite different from those that we typically see in esports.Instead, it acts more like a pyramid scheme.

According to the United GamesAffiliate Commission Program, users who sign up as affiliates are placedinto “tiers” such that a person you refer to become an affiliate islisted as a lower tier than you. The process continues, as youraffiliates can recruit others that will become part of yournetwork. Affiliates benefit from those they refer to the app andearn a commission based on purchased tokens. As in generalpyramid scheme fashion, those in the top tiers of the networkbenefit from those on the bottom.

A scheme like this is perfectfor someone with a large social media audience, such as TmarTn.With millions of subscribers/followers across YouTube and othersocial media, TmarTn could easily refer thousands of users to theapp and benefit from every single one of them moving forward. Theproblem, as Richard Lewis points out, is that TmarTn did notmention this at all to his fans. Something he also failed tomention is that it actually costs money to sign up as an affiliatewith United Games. On top of a one-time sign-up fee, a monthly feeis required to keep the affiliate account active.

In response to EightThought’s video, United Games sent him a letter in which theystate TmarTn is independent of United Games. They also state that“…it appears [TmarTn has] engaged in promotional activityneither approved or authorized by United Games.” Also in theletter, United Games denies that the app has any form of gambling,mainly due to the fact that players are “rewarded for theirindividual achievements, regardless of how other playersdo.”

Though TmarTn has ceasedadvertisement for United Games, who deny their affiliation withhim, sharing the app with his vast fan base does not benefit theimage many now have of him.

What are your thoughts on thisnew situation? Let us knowin the comments or on Twitter @GAMURScom.

Josh Billy is a long timeCall of Duty fan and can be contacted at [email protected] or onTwitter @Orbit_CH3MISTRY.