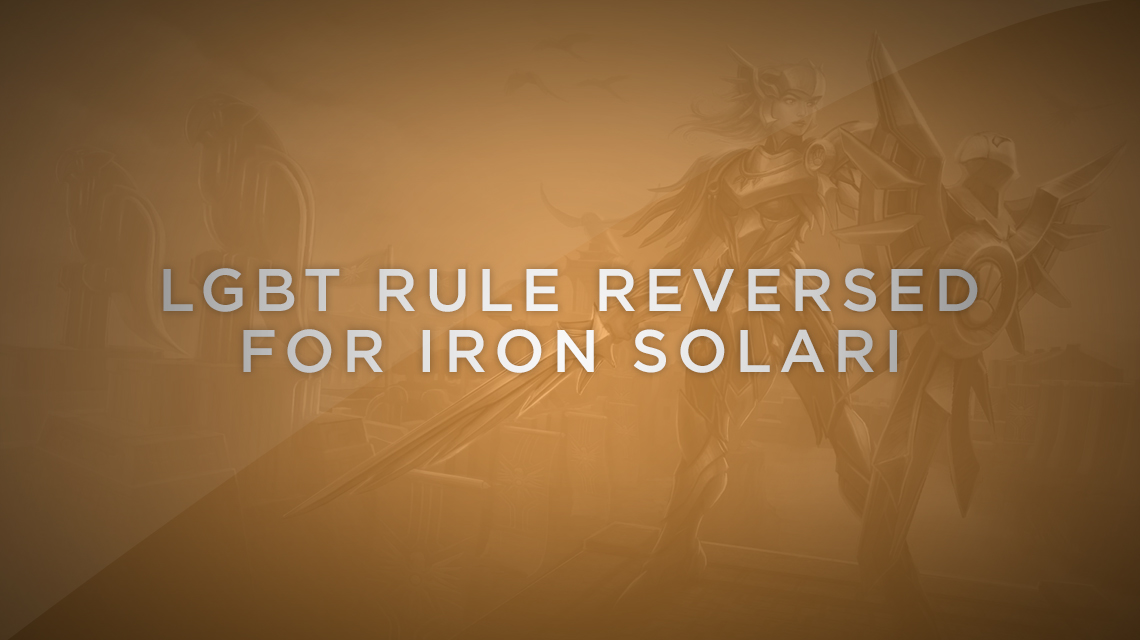 A Philippines eSports organization, known as Garena eSports, has removed its previous restriction on LGBT players going into Iron Solari, an upcoming women-only League of Legends event being hosted later this month.

Garena eSports originally set a quota of LGBT players on each team to participate in their women-only League of Legends tournament. This quota was introduced because they felt that a trans woman would provide a competitive disadvantage over other teams. As soon as it was announced, it immediately generated rough criticism from the LGBT community and the players participating in the Iron Solari event. The tournament was created with the hopes of spreading diversity throughout competitive gaming by introducing a sex restriction on players. Yet, at the same time, Garena was limiting diversity in a big way by failing to understand and consider LGBT rights. The consequence for violating this rule was going to be a year-long ban to any Garena eSports sponsored events. The original quota system developed by Garena Philippines eSports stated:

Each team will be allowed to have a maximum of one (1) Gay/Transgendered woman for the entirety of the tournament day.

Following the released ruling, Garena received an enormous amount of negative feedback on social media, including from Riot Games, League of Legends developer. It became apparent that this ruling was very discriminating to some, and became viral within 24 hours. Regardless of Iron Solari not being a Riot supported event, Riot proceeded to show their dissatisfaction with their partners quota system in one of their most recent tweets. https://twitter.com/riotgames/status/562711265899188229 Garena eSports later responded with an apology and reversal on their former ruling for Iron Solari. With the constructive and negative feedback that Garena was receiving, they re-evaluated their decision after contacting their partners, and completely removed the original quota. They released a statement saying:

Our initial ruling on LGBT player restrictions within the Iron Solari League has created a lot of good discussion and debate over the past 24 hours. After discussing the ruling with our partners and re-examining our approach, we have decided to remove these restrictions completely. This means that any player who self-identifies as female will be allowed to participate. We sincerely apologize for any offense we caused to the LGBT and gaming communities.

Our original intent when we put together this tournament was to promote diversity in the competitive gaming community. Hence, we are grateful to our players who have consistently provided their feedback to help us learn and improve as we strive to develop an inclusive gaming environment for all. We’ll also be keeping our promise of having an open dialogue with all parties as we plan this and future events. We hope you will tune in to support these awesome teams and players in this upcoming tournament.

Even though this issue has now been resolved, it has stirred a community-based hornet’s nest into competitive equality aimed at all of League of Legends partners. What are your thoughts on the developed situation? Let us know in the comments, or on our Twitter – @eSportsNation.