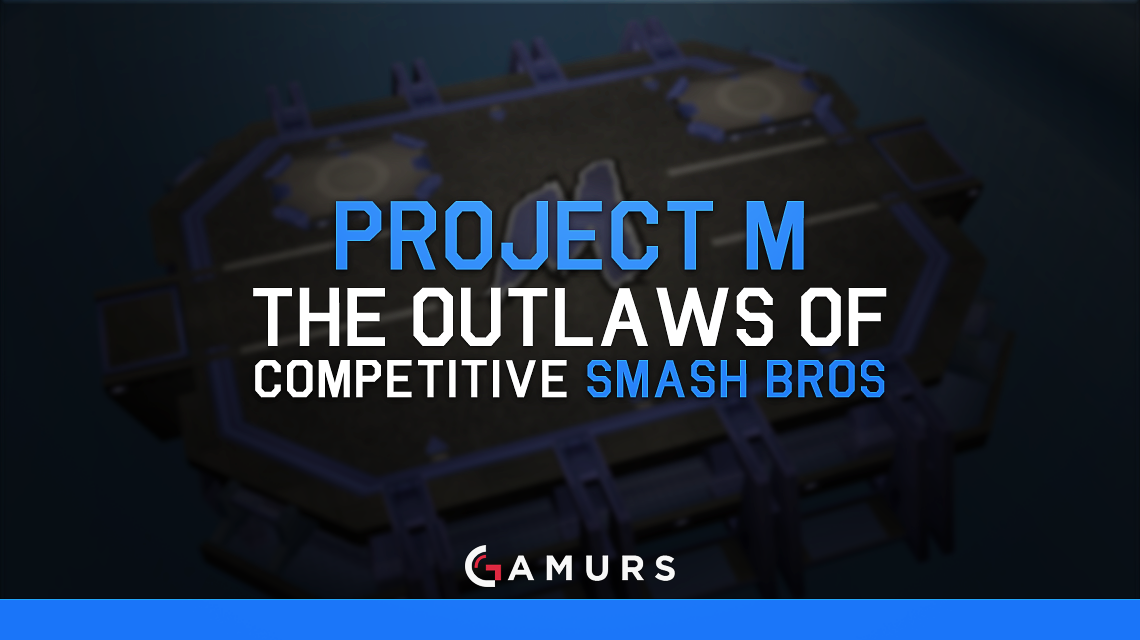 The game diversity of the competitive Super Smash Bros.community has always been an interesting case study. Each game isvery different from one another, often appealing to contrastingcrowds and personalities. But Project M is something strange anddiverse in its own right, and due to it’s outlaw nature, hasbeen pushed to the very edge of the greater scene.

Project M was created due to thecommunity’s dissatisfaction with the third entry in theseries, Super Smash Bros. Brawl. A mod of the Wii game, the firstdemo was released to the public in February of 2011. Over theyears, the game saw many updates that changed gameplay, introducednew characters and retooled old ones. Ultimately, the game saw itslast update with version 3.6, the developers announcing December of2015 that they would abruptly cease development. While it wasspeculated that this was the result of a legal threat fromNintendo, the team publically stated that they decided to pursue anoriginal product rather than continue to work on a modification.Despite the end of updates from the original team, the communityhas lived on and continues to host events. But they’ve beenmet with numerous roadblocks along the way, making them the outlawsof competitive Smash Bros.

Although they have never pursuedlegal action, Nintendo has always been firmly against the mod. Anymention of Project M on Nintendo’s “socialnetwork” Miiverse can result in a ban from the platform. Thepolicy is so outrageous that even simply writing “PM,”the mod’s common abbreviation, can bring forth the banhammer. More damaging to the scene, the publisher has activelypursued removing Project M from as many events as they can.Starting in 2014, Nintendo began sponsoring various communityevents, such as Apex 2015 and Genesis 3. While no official word hasbeen put out on the topic, it’s well known that thesesponsored events can have no formal involvement with the mod. Thishas even gone as far as preventing commentators at the events frommentioning Project M at all. VGBootCamp, one of the most popularSmash Bros. event streamers and was once upon a time one of thebiggest supporters of Project M, went as far as removing all of thecontent related to the mod from their channel.

Fighting against theseroadblocks, the Project M community remained defiant in the face ofauthority. While they couldn’t be part of the biggest eventsin any official capacity, they hide in the corners and participatedthrough unofficial, and sometimes even unauthorized, tournaments.This means never being able to be supported through anevent’s main streams, never benefiting from event providedpot bonuses and sometimes even being forced to host tournament at avenue outside of the main event. Whether that means competing insomeone’s hotel room or in the venue’s parking lot,Project M players find a way.

Despite their perseverance,things only seem to get worse for the community. Another case ofNintendo pulling strings in the background, it appears as thoughthey’ve even been able to push Project M off of Twitch.tv,the most popular esports streaming platform. This started with theremoval of Project M as an official game on the platform, no longerare streamers able to even communicate that they’re playingthe mod. While this might seem insignificant, it prohibits growthwithin the community and stops new players from discovering themod.

Twitch’s destructivepolicies don’t stop there, however. Various streamers andprominent community members have alluded to the fact that streamingor supporting Project M can lead to having one’s Twitchpartnership revoked or not receiving one in the future. This candrastically reduce the streamer’s earnings and essentiallybully them into avoiding contact with the game. This means thatTwitch has effectively become a dead zone for Project M, cuttingthe community off from one of the best ways to grow support for arising esports scene.

But, once again, the Project Mscene is resilient and fights on. The players have found a new homewith Hitbox TV, one of Twitch’s main competitors. In someoccasions, such as Paragon LA, the Project M stream has had to bemoved from a Twitch stream to a Hitbox stream mid-tournament orjust before starting, sabotaging the potential viewer count. Interms of Paragon, the change was allegedly brought on by thetournament organizers requesting that the Project M hosts distancethemselves from the main event, likely due to interference fromTwitch or Nintendo themselves. As time has gone on, Hitbox has evenbegun to host their own tournaments for the game, such as theupcoming Hitbox Olympustournament. Thestreaming platform’s involvement has come as a blessing forboth parties, allowing for a struggling Hitbox to grow their marketshare and for Project M players to find a last refuge.

This leads to the possiblesolution for the Project M community’s struggles: if theyaren’t allowed to be part of the regular events and officialtournaments, what can they do? The answer is rather simple: theysimply host and promote their own.

The Project M ChampionshipCircuit is an initiative launched by PMTV, a group of Project Mcommunity members who hope to build the central hub for Project Mcontent. They primarily produce content on Hitbox, as well ason their own website, the appropriatelynamed “Project M Underground.” The circuit began in March 2016 withan event at McMaster University in Hamilton, Ontario. With one ofthe largest Smash Bros’ communities in Canada, this was anexcellent choice of location to launch the circuit. Frozen Phoenix,as the event was known (named for the bird featured onMcMaster’s crest as well as for its northern location),offered $1000 in pot bonuses and a double and singles Project Mtournaments. The event set the pace for the year, with more than 10additional tournaments to follow.

While the circuit’s eventswere often centered around Project M, they also saw aid from thegeneral Smash Bros community. Community hosted Melee events, freefrom the influence of Nintendo, such as Splash and Smash 2016 andLow Tier City 4 offered up a chance for Project M to be featuredalongside its brothers. The circuit will ultimately conclude withan invitational championship, the previously mentioned Hitbox eventwhich will require points earned from the preceding events to beable to attend.

Despite the troubles that thescene has faced, Project M is currently in one of the best placesit has ever been. Although the game has ceased development, thishas allowed players to develop a consistent meta and determine whatthe optimal way to play is. The stableness of v3.6 has delivered anexplosion of players and thus a resurgence of tournaments throughthe Championship Circuit. The success and survival of Project Mshows the resilience of its community and beckons back to thegrassroots origins of esports. Large spectacles, venues andcoverage are a luxury, but all a game really needs is a dedicatedcommunity and people willing to host tournaments.

Here’s hoping that theProject M community continues to overcome all obstacles. It’sa game made by the community for the community, and is kept aliveby those who found a passion for it.

What do you think about thetrials and tribulations of the Project M community? Let us know inthe comments below or tweet us @GAMURScom.