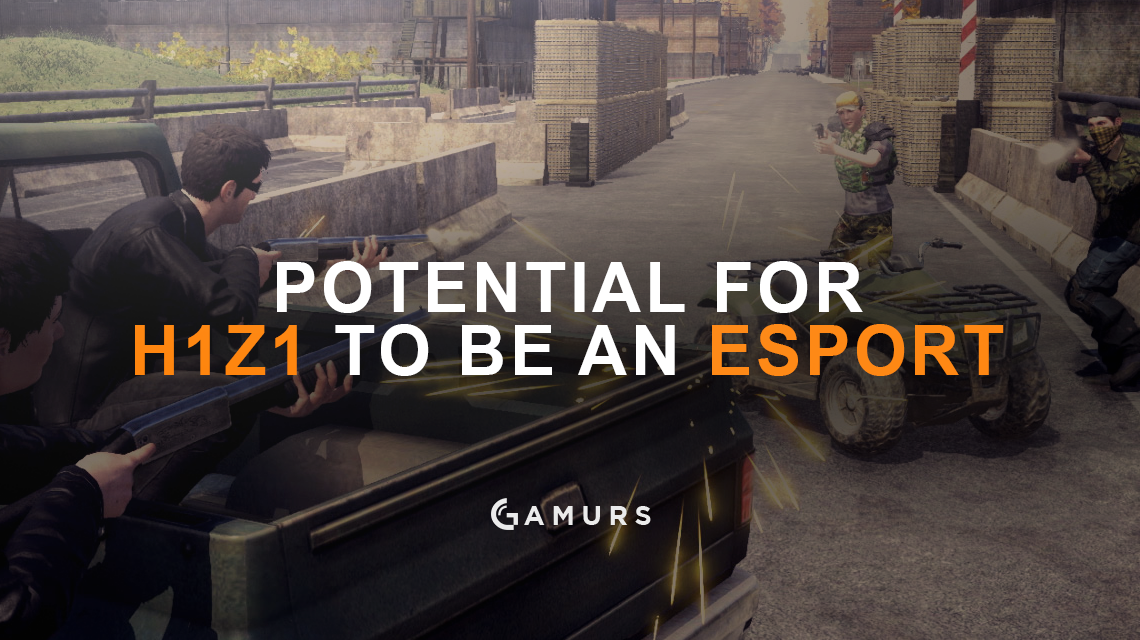 The thought of an early access game being considered an esport can be really sketchy, but now that H1Z1 is fully released with a strong backing by the community, it has a lot of potential. Updates and listening to feedback by the community shows that Daybreak is ready to fix the error of their past to fix the game for the future.

Introducing the ranking system, along with having their Invitational showcasing big names in the community, H1Z1 looks like they might be pushing to make it an esport. Sure, the Invitational is just supposed to be for fun and to show off the game, but you can’t help but see how crazy good the players are. H1Z1 even helped a ton of streamers gain popularity, such as SxyHxy, GassyMexican, Trick2g and many others. The community is definitely big enough to warrant being an esport, it’s just a matter of time and dedication.

Pro Halo player Tyler “Ninja” Blevins won one of last years Invitational matches, winning $19,923. As of today, he is ranked number four on the H1Z1 ranked ladder and will be attending the Invitational again. This year, however, he said he has his sights on taking home the win on both rounds, which would net a lot more money given the prize pool is currently at $245,000.

Former pro CS player and huge personality on twitch Summit1G also plays H1Z1 regularly on stream, and he constantly speaks out about ways the game can improve and how fun it would be as an esport. The 2016 Invitational is allowing many people, like Ninja and Summit, to come out and show off the skills they have been practicing in order to take home a decent chunk of money. However, Summit has expressed concern with the Invitational, saying that “you can’t be taken seriously unless you let people bring their own mouse and keyboard.”

H1Z1 is a game that is incredibly easy to learn. The basis is simple: spawn, loot, kill, win. However, the skill ceiling for this game is incredibly high; the minute things that you have to perfect such as managing armor, helmets, bandages, positioning, recoil, gas and tactics all play a factor in how much you can learn. These are the types of things that separate Ninja and Summit from you or me.

An issue I would see with H1Z1 being an esport is that it would likely only be single FFA games as opposed to duos or five-mans. The FFA format would provide constant action, especially when pitting top players against each other, meaning the chances of lulls in the gameplay are slim to none.

On the other hand, with duos and five-mans, the game would likely be too slow as teams spawn farther away, firefights end extremely quickly with enough coordination and the map/spawns aren’t exactly built around a competitive multi-person format. Slow gameplay doesn’t make for a fun spectator esport.

The biggest issue that H1Z1 has is the game is just overall buggy and refuses to work at times. The official release of the game brought a slew of issues and crashes that sometimes make the game unplayable, whether it’s the game crashing when you die, not allowing you to see or gain rank in duos/five-mans, canceling healing items when entering or leaving a vehicle or not opening the game for no reason at all.

Until these issues are resolved, the game will likely be in a state of purgatory where it’s not quite an esport, but it’s trying to be. Luckily, the developers have stepped up their game since the release and are talking to the community about getting every game-breaking bug fixed so the game can be its best. Hopefully, they stick to their word.

With Echo Fox and Twin Galaxies pairing together to find the top players around the world to represent themselves in the Invitational, we already see esports organizations expressing interest in the game. While it may not mean that they are 100 percent ready to invest into it, it does show that the possibility may not be too far into the future.

We will likely see something similar to Smash Bros in that organizations will sign one or two players who will play in the singles format. Depending on how the game grows from there, we might see Daybreak make changes to duos and five-mans to allow it to be played at a more competitive level.

What are your thoughts on H1Z1 as an esport? Do you think it has potential? If not, why? Let us know by commenting below or tweeting us @GAMURScom.