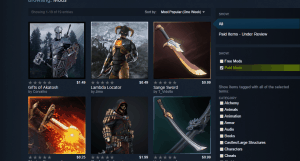 Let’s get this out of the way quickly. In a business sense, is selling mods a good or a bad thing for Valve? For Valve itself, it is almost guaranteed to be a good thing unless a few things happen.  This is because they’ll end up shafting the people who create the mods (they only get about 25% of the revenue) and people will still continue to purchase mods. Valve will make money. Today, Steam showed a new section in the mods section. Something that PC gamers had never seen before – “Paid Mods.” To most PC gamers, this was immediately an outrage. Mods were something that helped define PC as its own genre of gaming. We had people who played and added onto the games because they truly loved and liked the games – not because there was a financial incentive. This meant that, generally, the mods people put out would be significantly better than content that was just trying to squeeze a few nickels out of someone. In the past, Valve has been an amazing company for PC gamers. They released Steam, almost the universal go-to gaming platform for PC gamers. They created games that are still played and made into huge spectacles of eSports such as Counter Strike: GO and Dota 2, while having some old classics like Half-Life and Half-Life 2. Hell, Gabe Newell has a cult following of people who love what he does and respects him as a game developer. However, that does NOT mean we should just lie down and take this new system. In the past, if you enjoyed a mod, you could generally find their webpage and donate to them to show support. Some argued that this “Paid Mods” won’t be a big deal, and gamers will still be able to get their mods from Nexus. The problem with this is that eventually, nobody will put their mods on Nexus. Why? They can easily monetize it over Steam. On top of this, Mods generally don’t have the same kind of support DLC has. DLC doesn’t become broken as soon as the game is updated, while mods may be. The developer of a mod has no real incentive to fix it if the game is updated to a point where it breaks the mod – he already got the money from someone paying for it. Plus, some mods break other mods. We have no way of telling what we pay for is what we get and how it will affect our other mods. An alternative to what Valve would be doing could be to add a donate button on the Steam workshop rather than a force-paid option. First of all, we may have no idea whether we like the mod. Half the fun of getting mods for games is seeing all the awesome content you can splice together after you throw down 40 mods on a game. Sure, 22 of them may not work correctly, but the fun is in trying to piece them together. We’ve all had our gloriously ‘broken’ games of Skyrim and Fallout that were so spliced together even Dr. Frankenstein would be jealous. The free content and community developed aspect is something that we, as PC gamers, have come to love. This is something we should always have. There is only one way we can let this continue – and that’s by telling Valve. We don’t want Valve to become another EA.  As /u/Dinklebob on /r/pcmasterrace Subreddit said, “Your Emails are needed.” Send it straight to Gaben. Tell him yourself why you think mods are important and should remain free. We already get shafted by DLC content – don’t let it happen to our mod content as well, or we’re going to end up paying hundreds of dollars for one game. Imagine if every one of your Skyrim or Fallout Mods cost 2 dollars each. We’d be broke. Make your voice heard!