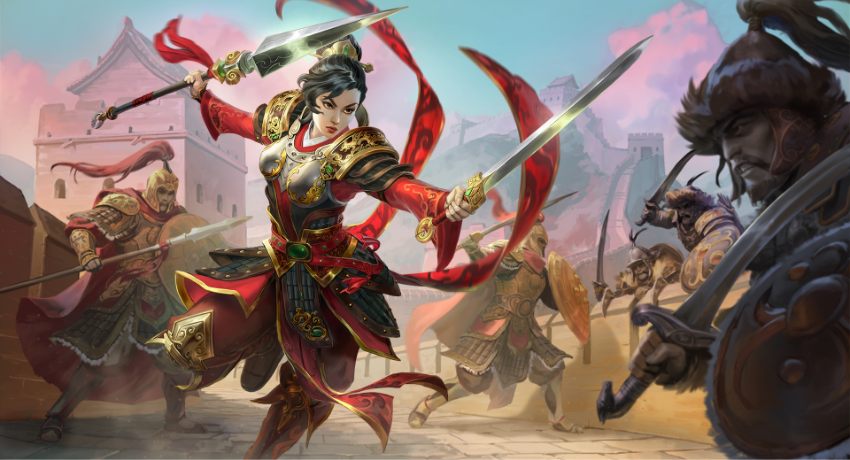 It looks like the Smite team is ready to get down to business to defeat the Huns.

Mulan players, rejoice. The Ascended Warrior will receive a buff through the Talons of Tyranny update, Hi-Rez recently revealed.

We’re sorry to disappoint fans of the animated film, but you won’t need to sing a musical number to make Mulan stronger this time. Instead, it looks like Hi-Rez will be making sensible changes to three of her primary abilities.

Mulan first joined Smite last February and has been a controversial character since then. Upon release, players were unsure what to make of Mulan. She spent the majority of 2020 as a guinea pig, receiving buffs in July and November.

As season eight rolls on, Hi-Rez has decided to buff Mulan once more. These buffs come in the form of minor changes to her abilities. Spear Thrust is an ability where Mulan uses her spear to damage and slow enemies in front of her.

The ability has added perks depending on whether it’s skilled, adept, or mastered. All versions of Spear Thrust have been buffed. Enemies hit by Spear Thrust will now be slowed for three seconds, up from two.

Next up is Mulan’s Grapple ability. Grapple causes Mulan to fire a roped arrow to stun a god and pull them toward her. The cooldown of this ability has been decreased based on its level. Instead of having a 16-second cooldown throughout, Grapple will now start with a 16-second cooldown that decreases to 14 seconds as you level up.

Finally, Mulan’s last buff comes in the form of Divine Mastery. This AoE ability allows Mulan to dash forward with a series of slashes. The ability deals damage and roots enemies but also does a knock-up if an enemy is hit during the dash. Divine Mastery can now be canceled early, meaning you can get out of dodge without blowing the entire move.

You can check out all of Mulan’s new buffs and test them for yourself when Talons of Tyranny goes live on March 23.