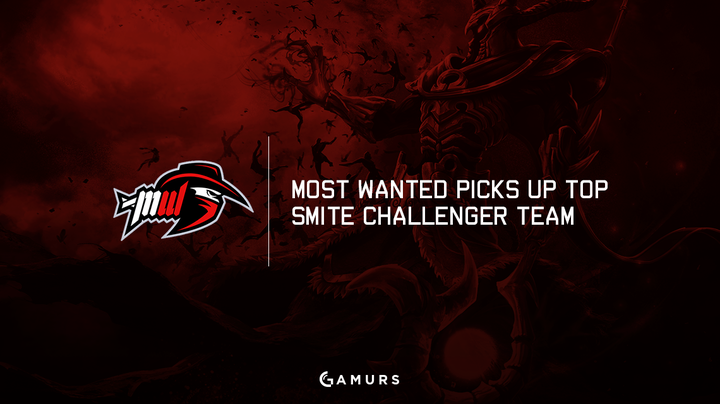 Most Wanted is continuing its expansion of bringing in upstart esports teams, as they picked up a strong American SMITE Challenger League side Aquaman and the Waves, the team announced Tuesday.

Alex Arteaga, Owner and CEO of Most Wanted, said that the move was a natural one, as he has a personal interest in this esport and that picking up this team specifically was an easy choice.

“I’ve taken a liking to SMITE, been playing it and been watching it. When this opportunity came to us there was no way we were going to pass it up,” Arteaga said.

Aquaman and the Waves dominated the Fall North American Challenger Cup, going 6-0 in group play, and will now play at HiRez Studios on October 30th in the Challenger League Final against Astral Authority. If they win, they will qualify for the Fall Gauntlet, where they will have to go through four pro sides to make it to the SMITE Wildcard tournament and, if they keep rolling, the World Championships.

Most Wanted are also automatically qualified next season’s relegation tournament, where they may find themselves in the pro league regardless of how they do on Oct. 30.

With a long road ahead of this side in the immediate future, Arteaga is confident that his organization’s new team can make the Gauntlet and give some pro teams a run for their money.

“I always feel like nobody ever pays attention to the underdog teams,” said Arteaga. “This team is filled with friends who have fun and enjoy the game. They’re very talented and I feel like they can make the Gauntlet if they put the hours of practice.”

MW was well known in the SMITE Console League before this acquisition, as they dominated the SCL Summer Season and saw themselves take a $13,000 first place prize in the Finals.

With this move into PC, Arteaga believes that this squad could be just as good as Most Wanted’s first foray into SMITE.

“They have the team chemistry and the skill. With practice I don’t see why they couldn’t mirror the former SCL team,” Arteaga said.

A month ago, Most Wanted made moves in Halo by acquiring the open circuit Chattanooga Shade Squad. They also recently dropped their CS:GO team, but are currently looking for a new side to represent.

Needless to say, it’s been a busy month for Arteaga and company, and picking up a SMITE team that will most likely go to the pro circuit is not a bad way to end an eventful October.

Will Most Wanted’s new side make it to the Fall Gauntlet, and quite possibly head to the SMITE World Championship?

Let us know in the comments below and for all your SMITE general esports updates, make sure you are following us on Twitter, @GAMURScom.