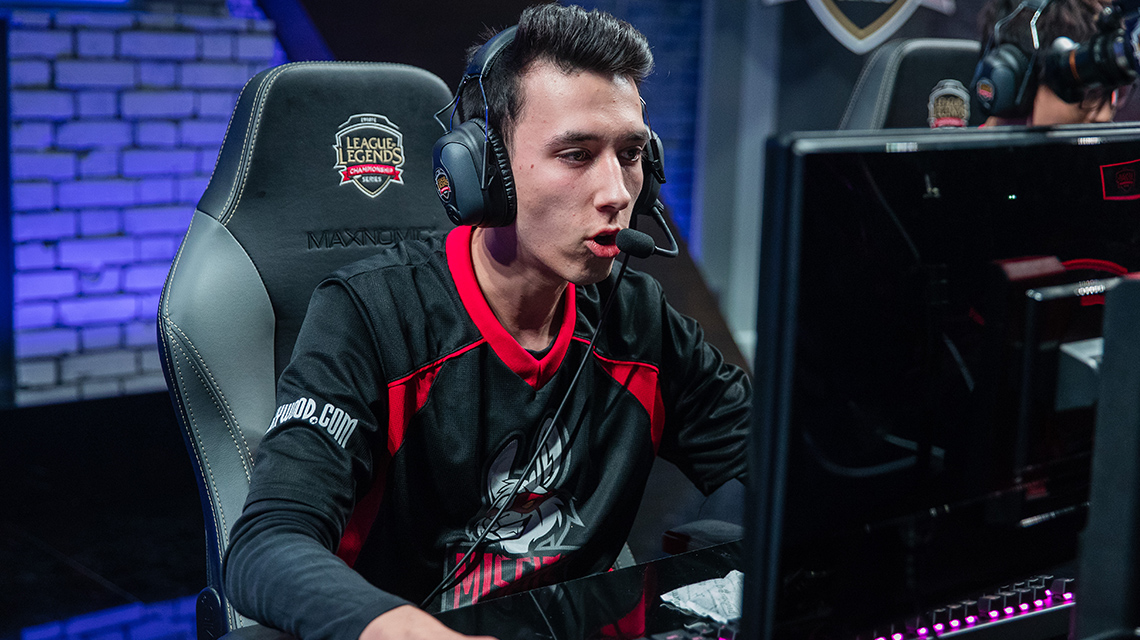 The day started off with a surprise, as Steven “Hans sama” Liv of Misfits chose the first Draven of the split. Despite the odd pick, Splyce roared out of the gates against Misfits in game one, taking two towers and an Ocean Dragon in the first 15 minutes. Misfits responded well, however, taking two towers of their own and gaining a gold advantage, something they would keep until the end of the game. Splyce’s better start and an early tower advantage would prove all for naught as Misfits’s team fighting would be the difference. The best example of this came when Tristan “PowerOfEvil” Schrage took down three of Splyce’s members around the 26-minute mark while Misfits captured the first Baron, allowing them to follow that up with a dragon and two towers. Although the momentum was in favor of Misfits, Splyce had a chance for a comeback until Lee “KaKAO” Byung-kwon snuck in and stole a Baron, leading to a four-for-one trade in favor of Misfits, which led to the end of the first game

The second game was not nearly as even as the first. Although Splyce again captured the first tower, they proved unable to secure kills or win team fights, losing three players with no trades in the first 12 minutes and then losing a team fight, tower, and dragon within a minute. Very little action occurred during the mid game, but Misfits changed the pace suddenly around the 28-minute mark, taking the entirety of Splyce down while not losing any members of their own. The ace blew the game wide open for Misfits, leading to them taking a Baron, several towers, and numerous more kills. That team fight would prove to be too much for Splyce, as they were defeated in game two in just over 34 minutes, giving Misfits the sweep and their fourth win of the split.

My player of the series goes to PowerOfEvil, who finished the series with a 12/2/16 stat line on Orianna. He was able to finish off Splyce in team fights seemingly every time, and he drew first blood in the second game against Martin “Wunder” Hansen to kick off what would be a blowout.

Game one of the series was a display of complete domination by Fnatic. Vitality failed to do anything in the game, only securing seven kills, no towers, no dragons and no barons. Fnatic was able to shut down everything that could’ve gone right for Vitality, making sure that every fight went in their favor as Vitality could not get a single multi kill until the end of the game. Fnatic was led by Rasmus “Caps” Winther, who finished the game with the most kills, most gold and the second most assists on the rift.

Game two was very much unlike game one, with Vitality on the offensive end and showing that they would not lie down and die. This turn of the tide was in part due to Caps’s aggression in the mid lane. Unlike in game one, Caps could not pull off some of the same plays and lead his team. In fact, he actually hurt them more than he helped, finishing 0/4/3 due to the play of Lee “GBM” Chang-seok, whose LeBlanc outclassed Caps’s Camille. In addition to GBM’s play in the mid lane, Charly “Djoko” Guillard was the star of the match, finishing with nine kills and no deaths after securing a late-game quadra kill. After nearly 40 minutes, Vitality destroyed Fnatic’s nexus to force a deciding game three.

In the final game of the day, GBM was able to draw first blood for his team, taking down Caps after a gank from Djoko. Ganks would continue to be key in the early game for Vitality, as Djoko ganked again just minutes later on the bottom lane to help Erlend “Nukeduck” Våtevik Holm secure a double kill. Despite Vitality having a 3-0 kill advantage, capturing the first tower, and having nearly a 2,000 gold advantage, Fnatic was able to fight back, getting a huge two-for-one and following it up minutes later with a three-for-one trade and capturing Baron. That tipped the scale in the game, leading Fnatic to grab tower after tower from then on, and executing their team fights just as they did in game one. Vitality could not respond, losing their fourth game of the split.

The player of the series between these two teams is going to go to Paul “sOAZ” Boyer, who was probably the most consistent player for his team, even in defeat. In the second game in which Fnatic only had four kills, sOAZ had three of them, adding to his series total of 11/6/15 to help his team notch their third win of the split. sOAZ also became the first player in EU LCS history to play in 250 games. His first game was four years ago from yesterday.

Can Misfits and Fnatic continue their winning ways? Let us know your thoughts by tweeting us @GAMURScom.