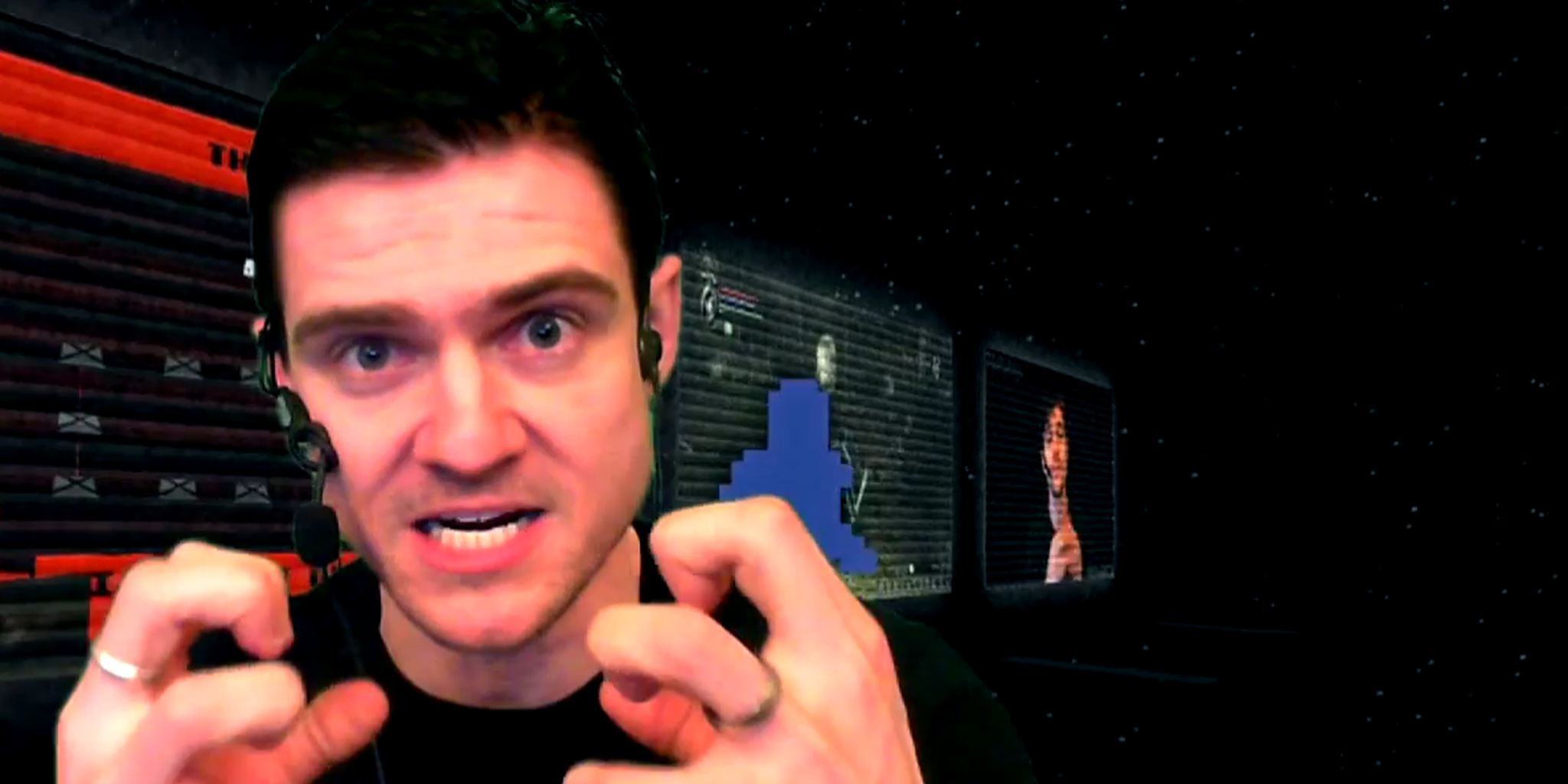 Thousands of people are watching Jayson Love sit on the couch in his basement, though the specifics of his location are not actually clear. He appears in the lower-left corner of their screens, with an Elvisian coif of black hair and a video game controller hanging loosely between both hands.

Like a professional sports commenter tasked with narrating his own pickup football game, Love’s delivering a running, step-by-step dialog over what’s happening in the rest of the screen: a direct feed of the video game he’s playing. On this day, it’s I Wanna be the Guy, an indie homage to classic, super-hard 8-bit side-scrollers like Mega-Man.

Behind Love, in the real world, is a green screen. In front of him are two expensive computing rigs, one running the game and the other video-streaming software. From his home in Billings, Mont., millions of bits of data are flowing along networks of wires that crisscross the U.S., eventually arriving at the servers of Twitch, a video game streaming company based in San Francisco. Passed through Twitch’s proprietary software, those bits instantaneously resolve themselves into the form of live video, which on this morning—6:30am Love’s time—more than 6,000 people are watching.

At the moment, conversation has shifted to entirely non-game topics, something that’s bound to happen during an eight-hour broadcast. Some of Love’s fans, who pay a small subscription fee to be able to chat with him in a running dialog next to the video, are delving into the merits of various Batman movies.

Love, 34, good-naturedly tries to take part, even as he navigates his character up walls lined with pixel-sharp spikes and the occasional, chocolate-colored floating platform.

“I can’t even try to hold a conversation right now,” he says. His character bumps into one of the spikes and explodes into a shower of pixelated gore. “Though Batman is my favorite thing right now.” Game over. He restarts the level. The Batman debates continue.

This is Love’s life. Every day, he heads into the broadcast studio otherwise known as his basement, loads up a game and streams it via his Twitch channel. There, he’s better known simply as “Man”—a shortened version the show’s name, Man Vs. Game.

While he’s living what he calls his “dream life,” Love is also driving a burgeoning revolution in how the Internet generation understands and interacts with video entertainment.

The biggest story in the entertainment industry over the past few years has been the mass migration of the TV audience to the Internet. Netflix and on demand services like Amazon Instant have gobbled up a massive audience, many of whom are sick of the wallet-busting cost of cable and the endless onslaught of commercials. But while the press focuses on industry-wide changes and upheaval, another story has gone largely unnoticed: the rise of the online video game broadcaster.

In August, Felix Arvid Ulf Kjellberg, a 20-something blonde Swede better known as “PewDiePie” leaped to the very top of YouTube‘s most popular channel list. Kjellberg’s specialty is to unleash a blistering fast and absurdly silly narrative (punctuated by with the occasional high-pitched squeal) while he plays video games.

In YouTube’s list of most-viewed channels, music stars dominate, most notably Rihanna VEVO and Justin Bieber VEVO. But the only other recognizable theme in the list are gaming channels, including a pair that specialize in content from indie hit Minecraft (SkyDoesMinecraft, with nearly 7 million subscribers, and comedy team Yogscast, with about 6.3 million) and the machinimist channels Rooster Teeth and Machinima.

Meanwhile, the professional, competitive side of gaming—where players battle in tournaments for money prizes, otherwise known as eSports—has carved out its own, separate chunk of the massive online video audience. Major eSports tournaments see millions of viewers at a time, including more than 32 million who watched the final match of something called the League of Legends Championship Series last October. Twitch, the site driving much of this traffic, has 40 million unique visitors a month watching broadcasts from 600,000 people.

Love sits quite unintentionally on the vanguard of this viewership revolution. A 2005 graduate of Minnesota State University, he’d planned on turning a degree in East Asian studies into a career in Japan. He applied to the JET program, the most well-known English teacher placement program in East Asia. But despite the fact he already spoke passable Japanese (as an undergrad he’d studied abroad in Tokyo), the JET program denied him. Love soon discovered that a degree in East Asian studies wasn’t particularly useful in the job field, living as he did in the vast Minnesota plains, just a few miles east of Fargo, North Dakota.

Soon, he moved back to his hometown of Billings, Mont. where found work at a home security company. (If you lived in Billings and your alarm went off during this time period, there’s a chance you spoke to Love on the phone.) That was followed by a stint at a tire garage and a rotating selection of other jobs. Basically, Love’s professional life was in the hands of his temp agency.

“I was in despair,” Love tells me via a Google Hangout chat, the green screen behind him hanging like a tapestry.”I was incredibly depressed. I was on the verge of quitting or getting fired.”

Then one night as he was falling asleep, he had an idea: What if he started an entire show where the entirety of the action and drama derived from watching him attempt to beat video games? For most of us, a late-night pipe dream fizzles away as fast as it appears, but something about it sunk deep into Love’s psyche.

It wasn’t just an idea. It was the idea.

Back before Twitch, streaming was a complicated affair, requiring special video cards and software and hours of labor to put a set up together. Love remembers going to a local Walmart to buy a big green tarp to lay out behind him, followed by hundreds more dollars on the equipment and a month spent mastering the set-up. Then, when everything was all ready, when we finally loaded up his first game, turned on his camera, and broadcast his mug to the world via early streaming site Justin.tv, no one was there.

“I remember almost having a panic attack,” Love says. “Going into the bathroom, staring myself down in the mirror, psyching myself up.”

The solution? Just pretend the audience was there. “I was faking it til I made it.” he says.

This was all while working other jobs and maintaining a relationship with his girlfriend, Tawny Picard, whose father, a real estate developer, rented out an apartment to the couple. Love, who’s legendary among fans for his spotty memory of the games he’s played, nevertheless remembers the moment he told Picard about his idea:

“We went to this shitty local Mexican restaurant called Dos Machos—Americanized Mexican food that we both loved. I said, ‘Honey, I have this idea for a gaming broadcast that i want to try to do, and i want to make a living doing it.’ She said that ‘sounds awesome'”

Meanwhile, he streamed in between shifts at a “string of soul-sucking retail jobs,” even as he played to largely empty rooms. There were a few early, curious visitors, however. Adam Gefre, a student at Boise State in Idaho, remembers browsing the gaming vertical of Justin.tv, where he found Love’s stream at the very bottom of the very last page. Around the same time, Cindy Martinez,  from the Bronx, N.Y., loaded up his channel—after also finding it on the very bottom of the last page. In both cases, Love immediately shouted out their names and started up conversations—with him talking and fans like Gefre or Martinez typing. Both came back, day after day.

“It always felt like you’d show up in the chatroom and he’d see your name,” Martinez recalls. “And he’d make you feel like you were an old friend who’d walked back into his house.”

This ability to keep one eye on the game and one on the chatroom wouldn’t change even as the show began to balloon—and perhaps it helped it grow. Gefre, who’s gone on to create the Man Vs. Game archive to catalog every game Love has played, says that as much as he loves interacting with and watching Love, nowadays the biggest draw to the show is the community that’s crystallized around Love’s personality.

Social media has brought celebrities and fans in close proximity before, but while those platforms provide an opportunity to occasionally interact with fans, they’re not exactly intimate: A tweet is about the most ephemeral connection you can imagine, and social media rarely provides the chance to interact with celebrities while they’re actually in the midst of entertaining. Streaming’s social dimension sets it apart from other types of video entertainment. Love’s fans feel like they know him, and one huge appeal of the show isn’t so much the action, but the real and almost emotional connection between the star and the audience.

It took me just a few minutes watching Love to empathize with all this. The morning he’s playing I Wanna be the Guy is a Friday and I desperately need to start work. But every time my mouse hovers over the little close window ‘X’ button, I can’t seem to click it. The more I watch,  the more I find myself rooting for Love. As inane as it sounds. I want his little pixel dude to clamber out of the spike pit. I want to see where he goes next, and more importantly, I want to see him win. That’s exactly how Love imagined it when he dreamed up the idea three years ago.

“The whole hook, the whole idea of my cast is the drama of watching games,” he says.

When Justin.tv spun off its gaming vertical to Twitch, Love went with it. As Twitch grew to become the premier streaming site for gamers, so did Love’s channel—or as he describes his relationship with Twitch, “the high tide raises more boats.” Nowadays, 129,000 people have favorited his channel (an equivalent to a subscription on YouTube), and he’s viewed nearly 27 million times.

“It’s mind-blowing to me,” Love says. “And it’s not all lazy—me just sitting around playing a game, blathering. To me, if you’re doing it right, you’re completely drained by the time you end your cast.”

Earlier this year, Love finally started earning enough from his streaming that he no longer needed to look for work. “Casting,” as its called, is now his full-time job. Without revealing specifics, Love says he’s making more now than he ever did before. The money comes largely through Twitch’s partner program, which lets him share a slice of advertising revenue, and also from the subscribers who pay for special features, like the ability to take part in the chat room. He also runs a small retail store, where you can buy Man Vs. Game-themed items, or “manchandise,” as Love calls them.

Last October, with the pine-dotted slopes of the Rockies looming as a backdrop, Love and Picard got married in a ceremony at Chico Hot Springs, Mont. In attendance were a few members of the Man Vs. Game community—including Gefre and Martinez.

“It was amazing to meet him and them for the wedding,” Martinez says. “It was one of the best weeks of my life.” The community had crowdfunded her plane ticket.