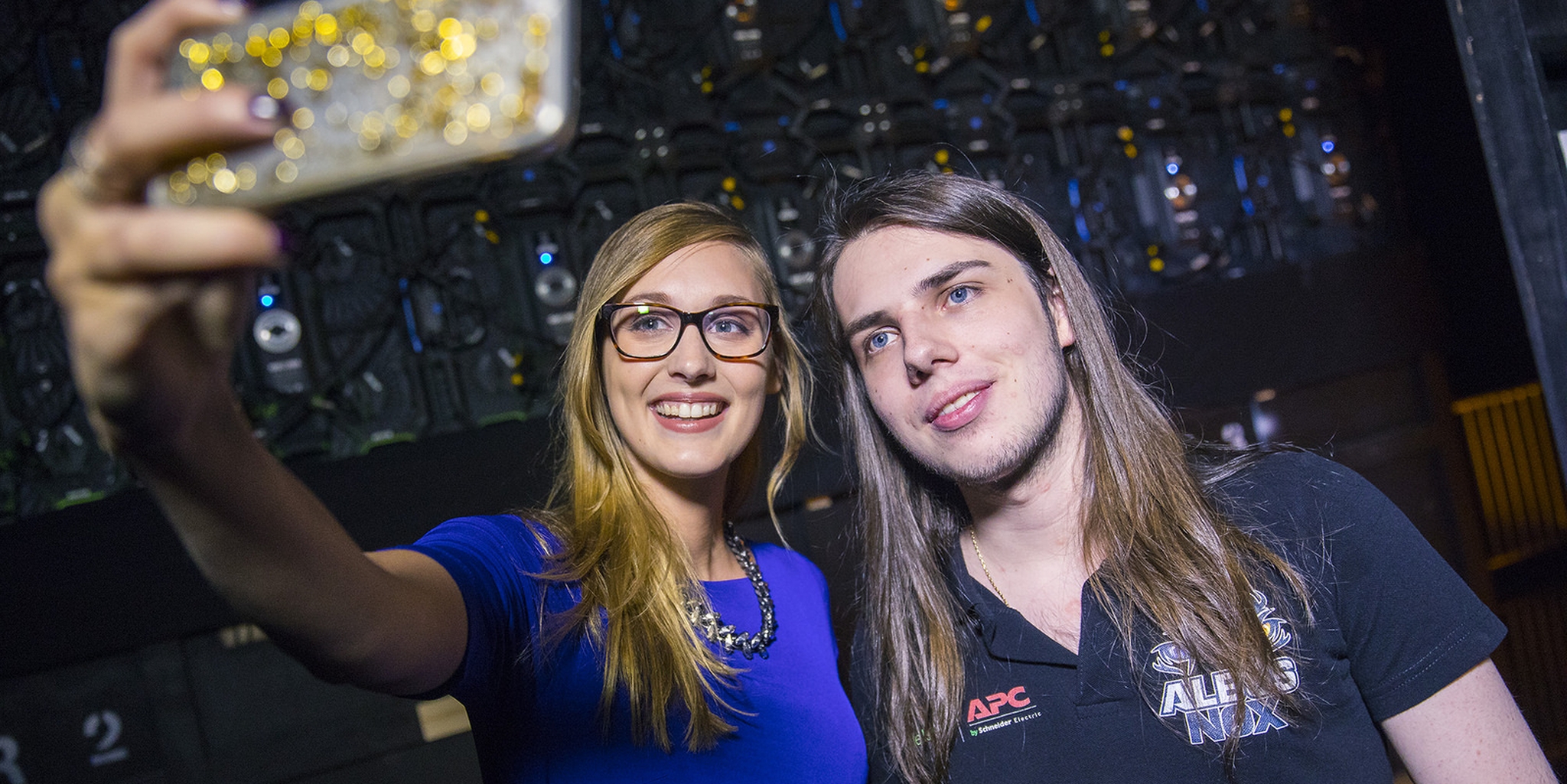 A wildcard team making the quarterfinals of the League of Legends World Championships was pretty unlikely. The possibility of that team beating the tournament favorites to do it was pretty much unthinkable. But Russian wildcard Albux NoX Luna has made both of those things a reality.

Coming into Worlds as the typical underdog and expected to go 0-6 in their group, Albus NoX Luna have confounded all expectations. Taking a win from Korean champions ROX Tigers as well as NA LCS high flyers Counter Logic Gaming, ANX were the first team to book their spot in the top eight.

Amidst the incredible performance, the team’s support player Kirill “Likkrit” Malofeev has emerged as a fan favorite from relative obscurity. His charismatic attitude and motivational speeches have earned him an eager fan base.

Dot Esports sat down with Likkrit to talk about their practice routine before Worlds, how he got into playing League of Legends, and how he feels about his newly found popularity.

How did you originally get into League of Legends, what’s your story?

Well I use to play World of Warcraft with my guild mates. One of them introduced me to League of Legends and I was like “what the fuck, I don’t like this game” and I was pretty done with it for like two years. But after, when WoW starting being tiring, I actually tried to give competitive League a shot and went for full try hard getting from Gold V to Diamond I in like two months.

What is the perception of esports in Russia? Is it frowned upon, is it accepted? What’s the feeling around esports where you come from?

Well in Russia not a lot of people care about esports. It’s not as popular yet, and if you talk about League of Legends people are caring about it even less. We have other major esports disciplines in Russia. And if we are talking about my family, my family doesn’t like esports but they still support me. When your son or your brother is in a World Championship, it makes you proud.

Do you have any experience in other games like Dota or Counter-Strike?

I didn’t even go semi-pro or even competitive level, but I have played a lot of World of Warcraft and this game taught me discipline and try-harding and that’s what I believe to be my first practice [for competitive League].

A lot of people have compared you to imaqtpie, because of the hair and your motivational speeches. Did you know who imaqtpie was previously to all this?

Well as far as I know he use to play as ADC for Dignitas, if I remember right. Maybe I’m wrong. I know who he is. I know some of his best quotes, like his quotes about EU, some quotes about motivation and stuff. I actually don’t watch him a lot, but I know that he’s hyped.

So how do you feel about being called the Russian imaqtpie?

Not the worst [thing to be called], not the best one.

Some teams in North America have been vocal about the amount of practice they are required to put in, and when you guys say you prepared by chilling and playing World of Warcraft. How many hours a day do you guys typically practice on average?

Every team member has different hours but we usually play something around five to six hours of scrims per day and about five or six, maybe more, of solo Queue.

Your team had a tough time qualifying for Worlds, narrowly beating out Lyon Gaming for the spot. What has changed from their that saw you beat ROX Tigers?

Actually, nothing has really changed. We just tried to improve as much as possible and got the time to relax for a while. Because we are a wildcard team we were really tired. So it was hard. And if we talk about wild card, we were considered leaders there and during Worlds we were considered under dogs, being an underdog is much easier.

There have been reports saying that you guys were not able to get any scrims before worlds. Did you manage to scrim at all? What was your preparation like?

Well we actually had some scrims. Like two in two weeks, and those scrims weren’t anything compared to how Worlds was. So I wouldn’t actually call them real scrims. Mostly we were playing World of Warcraft. Me and smurf and some other guys on our team were just chilling and clearing our minds for victory.

So your preparation was literally clear your minds by playing other games?

Who were the two teams you scrimmed?

We have scrimmed with Baskonia and Millenium. Baskonia is like a top three team in Spanish leagues, and Millenium is like top four in the EU Challenger Series.

You specifically have had some target bans against you with Brand and Tahm Kench. How does it feel when you have your specific champions target banned?

Well I’m pretty fine with it, because when you ban a champion you ban it not only for your enemy but also for yourself. Bard and Tahm Kench are pretty good solo picks. If people ban Brand they take one champion off from us, and that’s a really good ban. I find that my team gets comfortable picks because of it.

Do you have any players personally you look up to or watch to learn from?

Well actually it’s pretty hard for me during this Worlds because I consider [Kang “GorillA” Beom-hyeon, ROX Tigers support] to be the best or probably one of the best support players in this tournament. I think that he plays better than me on several champions, but I’m not really sure how I am suppose to learn.

Since you have come to Worlds your popularity has exploded, with your Twitter followers more than tripling. How are you going to capitalise on your new found fame?

I’m not really sure for now, because I have beeing streaming for more than a year now and I still don’t have donations because I turn them off. I’d like to be a streamer who streams for his own joy rather than for his public. If we talk about capitalizing, for me, if you are trying to capitalize and make it your actual profession, or even extra way to get money, you need to take it seriously. And if you talk about me as a streamer, I’m not really taking it seriously.

Would you like to do League long term? Are you thinking that far ahead.

It’s a wonderful journey, I really like it. But there are other worlds and I want to explore as much as possible. The first thing I would do is actually get an education because I quit my university to go pro.

How did your friends and family react when you told them you’re quitting university to persue league of legends?

As you can guess, negatively.

You said in a recent ESPN interview that you were considered one of the most toxic players in EUW. I saw a tweet from february that said “can someone please remove Krepo from my Solo queue, thanks.” Later you tweeted “ok I’m fine, give me back Krepo, but get Loulix out.” So which one would you pick to have on your team? Krepo our Loulix?

Whew…that’s a pretty hard question. Well if Loulix is on Lee Sin I will grab him. If Loulix played anything else I would prefer Krepo, and go Evelynn in jungle because whatever.

Since you came to Worlds, you’ve been the subject of a lot of memes. Which one is your favorite so far that you’ve seen?

If we talk about the news ones, because some memes are just copying Russian memes, the best one is about Russian Jesus actually. I really appreciate it. And actually a meme calling me a good guy is pretty wonderful as well! I like that this Worlds has given me an opportunity to get a fresh start towards fans and the community. Because, you know, being toxic is not so good.

So you’re taking it all and when you go back it’s a fresh beginning, it’s a new you?

Well I hope so, but I’m not sure what will be tomorrow. So If tomorrow I’ll be toxic again then I’ll try my best to be a good guy but you don’t know how it goes so I can’t predict.

Do you have anything else you want to say to your fans, and the community?

I just want to say thanks again to everyone who supports us and me personally because having people support you is really important. That’s all.