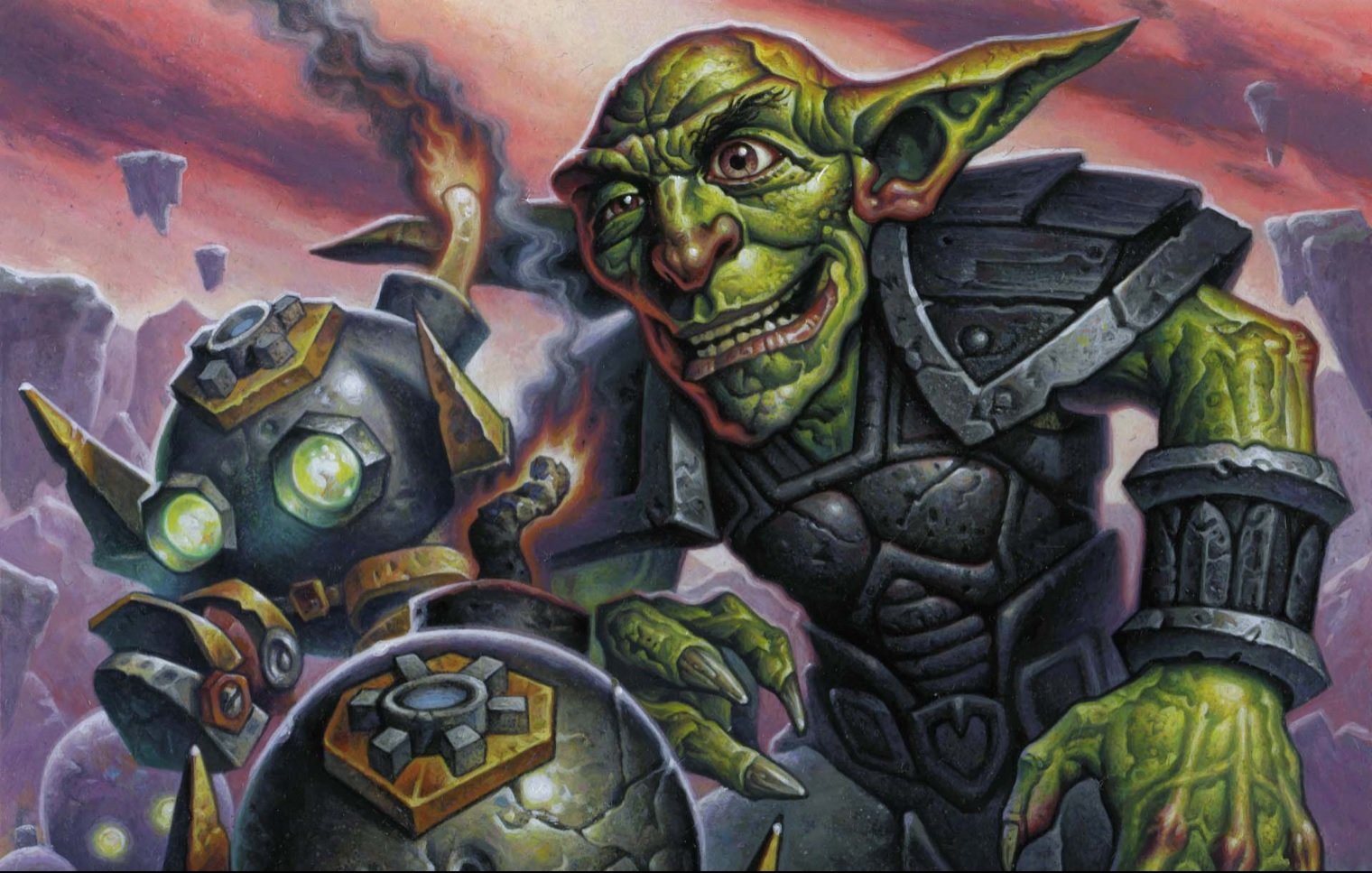 While most of the Boomsday puzzles are tough in their own right, the final Dr. Boom challenges are the toughest of the tough. You need to have Mirror, Clearing, Survival, and Lethal skills that are primed and ready to go.

Puzzle 1: Of Pirates and Patrons

Hope you paid attention during the Patron days. Open with Super Soldier into Frothing Berserker, then equip Fiery War Axe and play both Dread Corsairs. Trade both Corsairs into the Belcher and hit the 1/2 slime with a 3/2 Patron. Cast Whirlwind and Slam a 3/3 Patron. Attack with everything.

Play Wild Pyromancer and buff it with Power Word: Tentacles to give it some health. Drop Haunted Creeper, cast Recharge, and play Defile to bounce Spud M.E. around. Divine Spirit your Wild Pyromancer, cast the second Defile, and then Holy Smite Spud M.E.

Cast Battery Pack into Fungal Enchanter to draw three Clerics. Drop all of the Clerics, Binding Heal a damaged minion, and cast The Swap. Treachery your last Northshire Cleric to give it to your opponent and cast Circle of Healing.

Undercover Reporter your Northshire Cleric to put them on top of your deck. Ping one of your minions with Elven Archer, then Power Word: Shield the Elven Archer and play Northsire Cleric. Use your hero power on the damaged minion to draw.

Play a Northshire Cleric and cast Battery Pack before using The Swap. Run out Wild Pyromancer and use Treachery on the last Cleric to both damage the board and give your opponent more draw. Drop down Fungal Enchanter and use Binding Heal on the Undercover Reporter. Cast Circle of Healing and wait it out.

Copy Abomination with Prince Taldaram so there are two on the board. Play Kidnapper on Sea Giant, then run Kidnapper into Abomination and attack Cruel Dinomancer into a Sea Giant. Attack the other 8/6 Sea Giant with your Abomination before Soulfiring the final Sea Giant.

Attack with Archmage Benedictus. This will trigger Freezing Trap and bring him back to your hand. From there, play Archmage’s Insight and Recycle an Ultrasaur.  Run Polluted Hoarder and Radiant Elemental into Hoarding Dragon. Play a coin to cast Archbishop Benedictus, and then attack your Ice Rager into Loot Hoarder. Cast Healing Wave on the last Ultrasaur and trade Auchenai Soulpriest into Reckless Rocketeer.

Start by casting both Archmage’s Insight and Boots of Haste. With the discounts, use Betrayal on Dire Mole. Hit Howlfiend with Toxic Arrow, then Naturalize Howlfiend and cast Vanish. Play Gloves of Mugging into Novice Engineer (which draws candles and triggers The Darkness). Ping the engineer with your hero power and play Faceless Manipulator, copying The Darkness.

Puzzle 4: The Ray of Roasting

Start by stealing Glinda Crowskin with Shadow Madness. Use Prince Taldaram to copy Aviana, putting a 1 mana Taldaram into your hand. Play two 1 mana Taldarams, targeting Mal’ganis each time. Now that the demon lord is buffed, play Kun the Forgotten King to get your mana back and cast Ray of Roasting.

Puzzle 1: A Storm of Souls

This is the biggest Defile puzzle out there. First play Demonfire Ultrasaur, doing one damage to the board in the process. Play Moatlurker on either end of the board (so that it is out of the way) and use it to eat your Wild Pyromancer. Now cast Arcane Anomaly and hit Jade Golem with Demonfire.

You next need to Ratcatcher your Fearsome Doomguard and play Bloodfury Potion the Summoning Portal. To line everything up, play Void Terror next to the Moat Lurker so that it only ears the lurker and cast Defile.

Crazed Alchemist the Turret Sentinel and play Unlicensed Apothecary. Drop down Soul Repressor and eat it with Ratcatcher to get Mal’ganis into play.

For this one, you want to maximize spells. Play Lorewalker Cho, then copy it with Zola, then play the copy.

Puzzle 3: The Path to Victory

Start with Oaken Summons. Then, magnetize Zilliax onto the Steel Rager. Use Rusty Horn to give the Turret Sentinel taunt and attack it with the Rager. With the new mana, play Earthen Scales on Steel Rager. To solve, cast Branching Paths, gaining armor both times.

Cast Demonic Research and use Phasing Portal to put Mal’ganis on the bottom of your deck. Sacrificial Pact two Worthless Imps and use the extra life to cast Doom! Play Witchwood Imp and Soul Repressor. Eat the repressor with Carnivorous Cube, which drops Voidlord into play.

Once that happens, kill the lord with Dark Pact and cast Doom! to draw the rest of the cards in your deck. Play Flame Imp on the outside of the two Repressors and then eat both Repressors with the Void Terror to drop down Mal’ganis.

Go against your intuition and start with Explosive Sheep. Then play Ixlid, Fungal Lord and buff him with Barkskin. Hero power and play Battery Pack to get your mana back. Drop down Spiritsinger Umbra and Mistress of Mixtures. Use Voodoo Doll on the Explosive Sheep and play Plated Beetle.