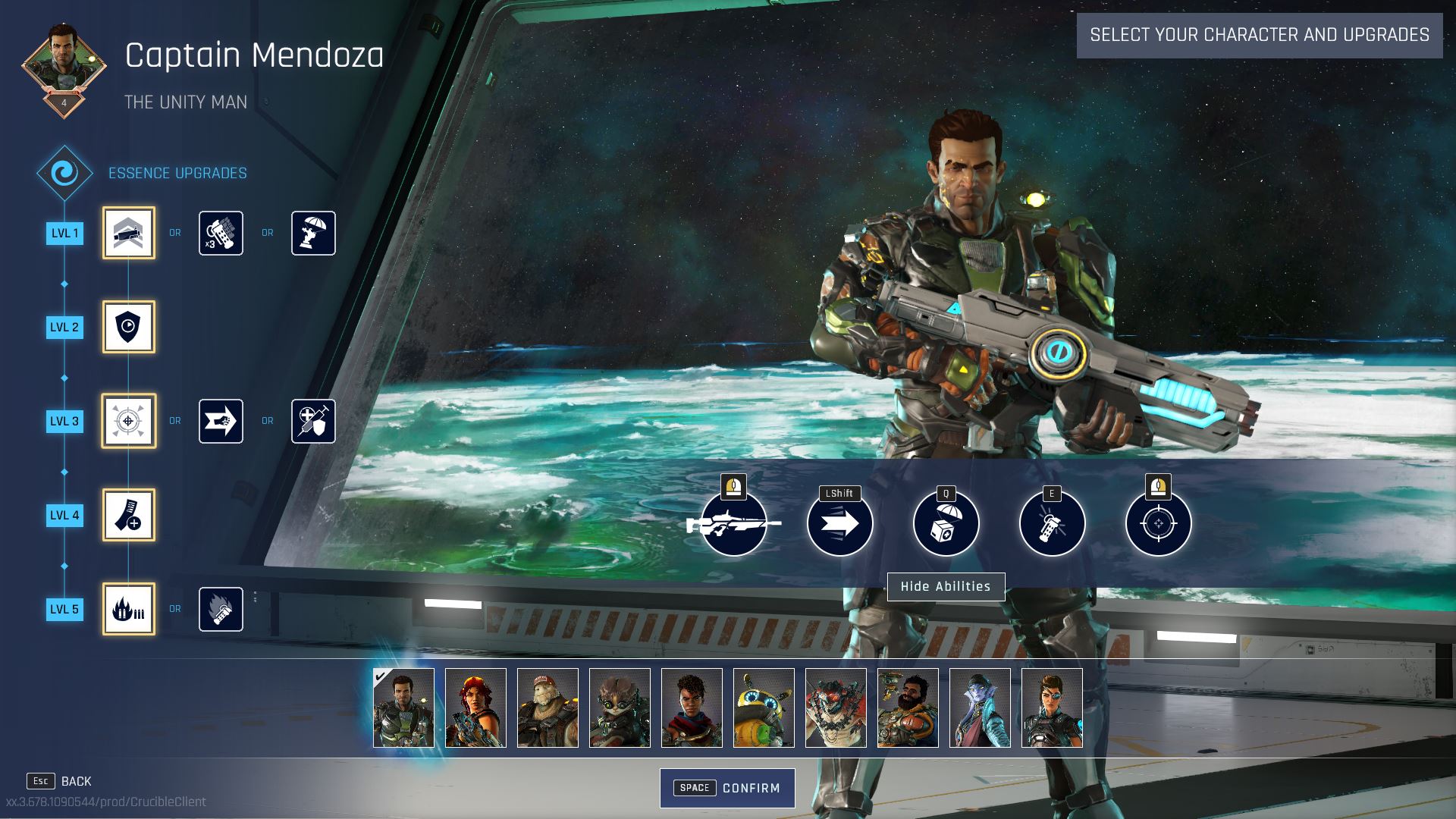 Captain Mendoza is the most standard run and gun hunter available in Crucible. His abilities include an assault rifle, a supply drop that gives him a med kit and usable cover, a flash grenade, and a sprint ability.

Using these abilities, Captain Mendoza can operate independently, making him an excellent hunter for capturing outlying objectives and moving between areas quickly. With the right essence upgrades, Mendoza can also serve as an excellent support player, providing medkits and an auto-turret to his team.

Two of his essence upgrades only offer a single option. At level two, players will receive a 200 health overshield that regenerates after six seconds of no damage. At level four, players receive the Magna-Clip Loader, which increases the magazine size and reload speed of his rifle. The rest of the level slots offer various options, allowing you to customize your build to operate as a lone wolf or as a helpful support to your squad.

Here’s what you need to know about how to play Captain Mendoza in Crucible.

Mendoza carries a standard assault rifle, which is one of the highest damage weapons available in the game right now. Captain Mendoza is capable of laying down serious damage against enemy players and enemy monsters alike. Players can also aim down the rifle’s sights to increase the accuracy of the weapon, which is a relatively rare ability in Crucible.

Over the course of a match, Mendoza’s assault rifle only becomes more powerful. At level four, Mendoza earns the Magna-Clip Loader, which increases his magazine capacity from 24 to 30 shots and increases its reload time by 25 percent. Players can also elect to use their upgrade tree to increase the effectiveness of the rifle.

If you’re playing a damage-heavy role, picking up all the assault rifle upgrades will dramatically increase your damage potential. If you’re playing a more supportive role, though, it’ll make more sense to invest some of your upgrade slots into a few of the other options. For players who are playing a versatile role, you can mix and match to figure out what works best for you.

Use his sprint to quickly move between objectives

Mendoza’s primary ability is that he can sprint. Mendoza’s sprint is unlimited, which makes him a highly-mobile operator. Although some hunters have abilities that help them move faster, the ability for Mendoza to sprint indefinitely makes him a great character for running longer distances.

At level three, players have the option to select Headlong Rush, which increases the speed of sprint from 8.5 meters per second to nine meters per second. Headlong Rush also causes sprint to deal damage and knockback any enemies you run over, which can be a helpful tool for catching enemies by surprise to draw first blood in an encounter.

Although it can be fun to select Headlong Rush, it’s far less useful than the other two options for the level three slot, which makes it hard to recommend burning a slot on this ability.

Mendoza has access to a powerful flash grenade, which deals a small amount of damage and blinds enemies for a few moments. This is a great tool to initiate fights with and it can also be used to foil damaged opponents trying to make their escape.

For those who are particularly drawn to the grenades, you can upgrade them to the MU-21 Mini-Flash Grenades using your level one essence upgrade. This ability gives players three mini-grenades instead of a single large one. The mini-grenades are slightly less powerful, but with three of them at your disposal, they can have a much larger impact on a teamfight. If you’re playing a supportive role for your team, this might be a good option.

Support yourself and your team with drops

Although the supply drop isn’t a sexy ability, it’s infinitely useful. The supply drop ability drops usable cover and a medkit on a 35-second cooldown. This ability is extremely useful, even if it’s only used to keep yourself and your teammates stocked up on medkits, which are essential and relatively hard to find. The supply drop can also be upgraded with the level one Autogun Bunker option. This turns your supply drop into a turret, which can be useful for adding extra damage to your loadout.

For players who want to play a more supportive role, it’s smart to select Stimu-Health Packs as your level three essence upgrade. This upgrade makes it so that medkits apply in-combat shield generation for 10 seconds, which makes Mendoza capable of tanking significantly more damage since his overshield will recharge much more quickly.

When it comes to selecting a Captain Mendoza build, there are two primary options to go for. You can do the all-damage build, which focuses on rifle and grenade upgrades. Alternatively, you can build a support loadout, selecting the Auto-Turret and Simu-Health Packs. There’s no correct answer, at least not yet, so keep experimenting to figure out what works best for you.