With so many new players and build types coming into Elden Ring, many are wondering what some of the best options are overall, as well as what to start with early on.

Those looking to create a Dexterity build have a lot of options when it comes to the weapons they’ll look to use. One of the more common routes is thrusting weapons, like Rapiers. These weapons are great for creating space and quickly engaging with the target. Additionally, many of these thrusting weapons are equipped with great unique weapon arts and ashes of war. 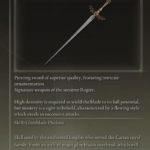 One rapier, in particular, is Rogier’s Rapier. A normal reinforcement weapon is obtainable fairly early into the game. While progressing through Stormveil Castle, players may run into Sorcerer Rogier, an NPC who is looking for something in the castle. Once players defeat Godrick the Grafted, Rogier will move to the Roundtable Hold. He will move regardless of whether the player talks to him in the castle. 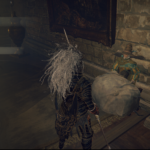 As players continue to talk and exhaust his dialogue, they will be given the option to purchase ashes of war from him or tell him that they’ve defeated Godrick the Grafted. Selecting that they’ve slain Godrick, Rogier will congratulate the Tarnished and give them Rogier’s Rapier +8. Due to his condition, he offers his rapier because his fighting days are behind him and he can no longer move. He says he has no more use for it and wants the player to have it.

Acquiring a +8 reinforced Dexterity weapon this early in the game is a great starting option for players looking to create a Dexterity build. This weapon offers a C scaling in Dexterity at +8 but improves to a B scaling at +10. If players choose to change the ash of war and select the Keen specialty, the weapon improves to an A scaling in Dexterity, increasing the damage output even more. It also has the Glintblade Phalanx ash of war, giving players a weapon art option to attack at a distance.