Ford Europe revealed a new virtual car design today made with the help of gamers from Team Fordzilla, the company’s European esports team that competes in games such as Forza Motorsport and Gran Turismo Sport.

The Team Fordzilla P1 is inspired by the Ford GT model. The designers took into consideration the ideas of Team Fordizilla on different elements, like the morphing technology on the body.

The virtual car has a low front end full of LED lights and a backlit Ford emblem, a transparent roof, partially covered rear wheels, and a back end that’s almost completely exposed.

Ford intends to premiere the car in a “well-loved game” and is looking to use it in more than one game. It hasn’t announced which games yet, but considering that Team Fordzilla plays Forza Motorsport and Gran Turismo Sport, it should appear in at least one of the two. 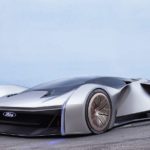 Fans will also be able to see the Team Fordzilla P1 in real life. Ford announced it will build a full-size scale model before the end of the year. More information will be shared in gamescom’s Opening Night Live today.