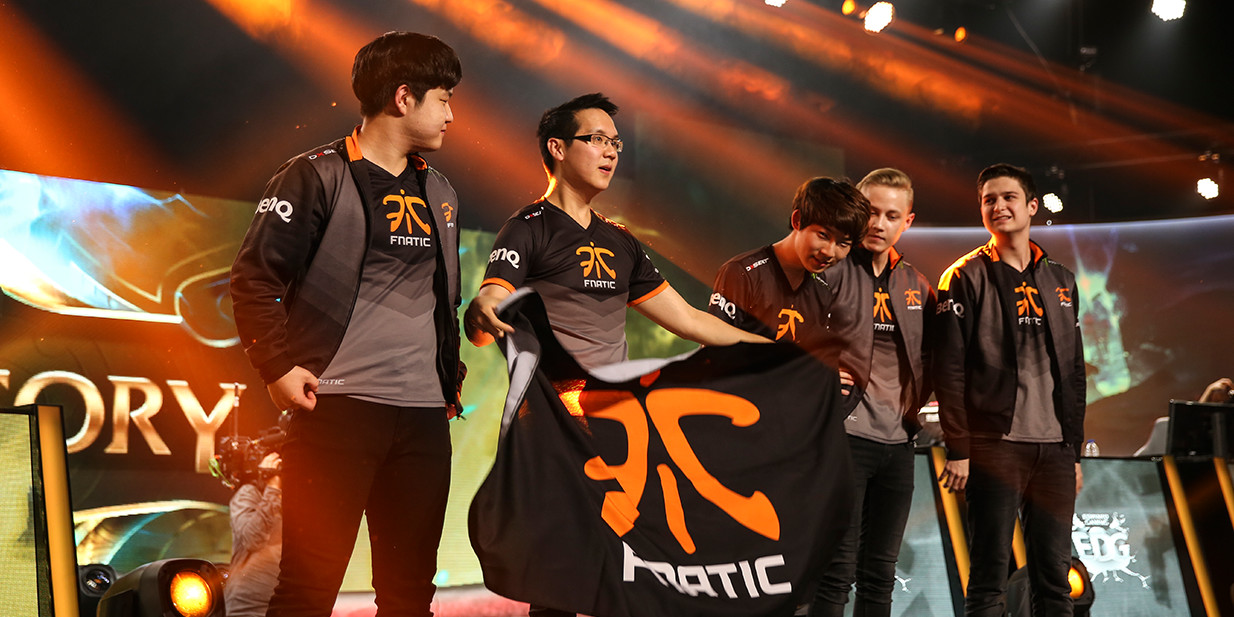 Today in London’s Wembley Arena, Europe rose above its Eastern foes once more at the League of Legends World Championship.

Just two days after European side Origen eliminated Taiwan’s Flash Wolves, the first place team from Europe Fnatic smashed its way through the quarterfinals as it took a shocking victory over Midseason Invitational Winner, China’s EDward Gaming. While some may have predicted Fnatic would rise above beforehand, no one expected Bora “YellOwStaR” Kim and his motley crew to sweep the Chinese juggernaut.

The performance showed massive improvement for Fnatic from its group stage run during the past few weeks in Paris. Although the team ultimately topped the group, it fumbled against ahq e-Sports Club and Cloud9 in its first week, showing signs of weakness for a team that dominated Europe throughout the summer.

This series saw the return of top laner Heo “Huni” Seung-hoon’s Jarvan IV in an explosive first game, a pick of which he’s not played since his team’s victory over Elements in week eight of the regular European League Championship Series season. And though Huni struggled early while being camped by EDward Gaming’s jungler Ming “ClearLove” Kai, he shined in teamfights by singling out opposing marksman Kim “Deft” Hyuk-kyu for deletion. Fnatic ultimately took game one after winning a key 20 minute team fight and taking the Baron right after.

Game two looked like another barn burner out of champion select as EDward Gaming let both Mordekaiser and Gangplank through the draft, picking the Master of Metal for their AD carry Deft. But midway through the bout, Fnatic jungler Kim “Reignover” Yeu-jin notified the admins of his Q ability, Gragas’ Barrel Roll, failing to cast onto the dragon. The game was shortly paused afterwards while Riot Games deliberated the outcome.

The referees decided to offer Fnatic a chance at a remake, considering the game was in an even state and there was no way to mitigate the bug without affecting said state. The game was removed from record and new picks and bans took place. The referees considered the removal of Gragas from the legal rotation, but considering the rarity of the bug that occurred decided to keep him available, for now.

That set up a new game with decidedly different team compositions, this time with EDward Gaming opting for a more traditional pick and ban phase with Veigar in the mid lane, Fiora in the top, and Caitlyn at AD carry.

But it was Fnatic’s mid laner Fabian “Febiven” Diepstraten and his LeBlanc that dominated the field after getting a triple kill in the bottom lane during a roam. He carried the game, helping snowball Huni’s top lane Riven as he blistered EDward Gaming, posting a 9/0/2 KDA with LeBlanc while dealing 38 percent of his teams damage in a sub-30 minute game.

Riot Games panned to EDward Gaming after the match with top laner Tong “Koro1” Yang in tears, knowing of what was to come. His teammates also looked defeated. The final game slowly put their pain out of its misery.

In the third game, Huni and Martin “Rekkles” Larsson took over on Riven and Jinx. Huni’s Riven made Koro1’s Fiora look silly, and the latter dominated team fights, eventually scoring a triple kill to end the match.

This year’s World Championship features some of the best mid lane talent from around the globe. Names such as veteran Enrique “xPeke” Cedeño Martínez, Season 4 World Champion Heo “PawN” Won-seok, and Season 3 World Champion and the game’s best player Lee “Faker” Sang-hyeok all made their returns to the stage this year.

How could a rookie like Febiven, competing in his first professional season, stack up?

Today, he proved he’s one of the best. In game one, he had an incredibly accurate Viktor, putting up a 5/1/10 KDA while making plays in the early game and terrorizing team fights late. But that was just the beginning for the Dutch mid laner to begin his terror.

Overall, the mid laner showed his strength. Next week, he’ll either face one of two Korean mid laners Lee “Kuro” Seo-haeng or Kim “Nagne” Sang-moon. But Fnatic showed have nothing to fear shall Febiven keeps this type of play up next week.

After a close game one where Fnatic needed a clutch team fight to turn things around, it looked like this would be a hard fought series. But Febiven’s LeBlanc set the stage for a dominating Fnatic performance, and it all got started with an early triple kill where he showcased some of his brilliance.

Tomorrow will determine who Fnatic faces the third Worlds semifinals of its history. Korea second and third ranked teams KT Rolster and KOO Tigers face off in what should be the closest quarterfinal of the event. The winner will join Fnatic, Origen, and SK Telecom T1 as they advance to the semifinals in Brussels, Belgium starting Oct. 24.