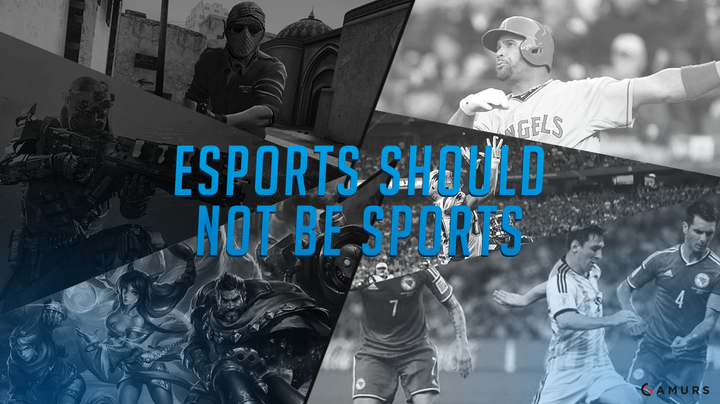 Why am I saying this?

The esports communityshouldn’t aim to be a sport; we should aim to be parallel tosports. We should aim to be likesports, but not a sport.
Sport is a broad term foractivities like football, basketball, tennis, soccer, etc…Esports is a broad term for games like League of Legends, Counter-Strike: GlobalOffensive,Call of Duty, DOTA 2 and so on and so forth.
Sports and esports shouldaim to coexist, instead of being under the same definingterm.

Why should esports aim to be parallel?

It makes more sense for the community and the industry as awhole. Every year, when the X Games take place and an esport isbroadcasted on live television, there is a guaranteed wave oftweets that criticize esports not being sports. The generalcommunity then attempts to justify esports as sports by eitherattacking sports or criticizing the outspoken athletes (see X GamesAustin 2015).

Of course, there are some in thecommunity who effectively reason with the naysayers of esports, butthose people are so few and far between the toxic voices that theyare rarely noticed.

Instead of aiming to align with a community that isn’textremely accepting and a term that is already defined, the esportscommunity should aim to be its own thing.

This idea can easily be accomplished, because there aren’tmany people who deny esports as a thing. The main criticism towardsesports is that they aren’t sports; other than that, peopletypically acknowledge esports as an activity and it continues togarner respect at a significant pace.

Also, there are many commonalities in how the athletes upholdthemselves. Sports athletes work out almost daily, eat healthy andconstantly study gameplay. Esports athletes work out almost daily,eat healthy and constantly practice (as they have the luxury ofaccessibility to video games). They follow seasons and compete intournaments. Furthermore, they have to endure roster changes,contract disputes and money issues.

The sooner the idea of esports being parallel to sports iswidely adopted, the sooner esports can find a solid foundation.Sports/watching sports didn’t emerge as a household activityovernight, but as public acceptance and understanding grew, theidea of competitive sports became more realistic.

Esports can easily follow that same path with less obstacles,especially if the community stops aiming to be a sport.

Do you think that esports aresports, or should esports not be considered sports? Let usknow by commenting below or tweeting us @GAMURScom.