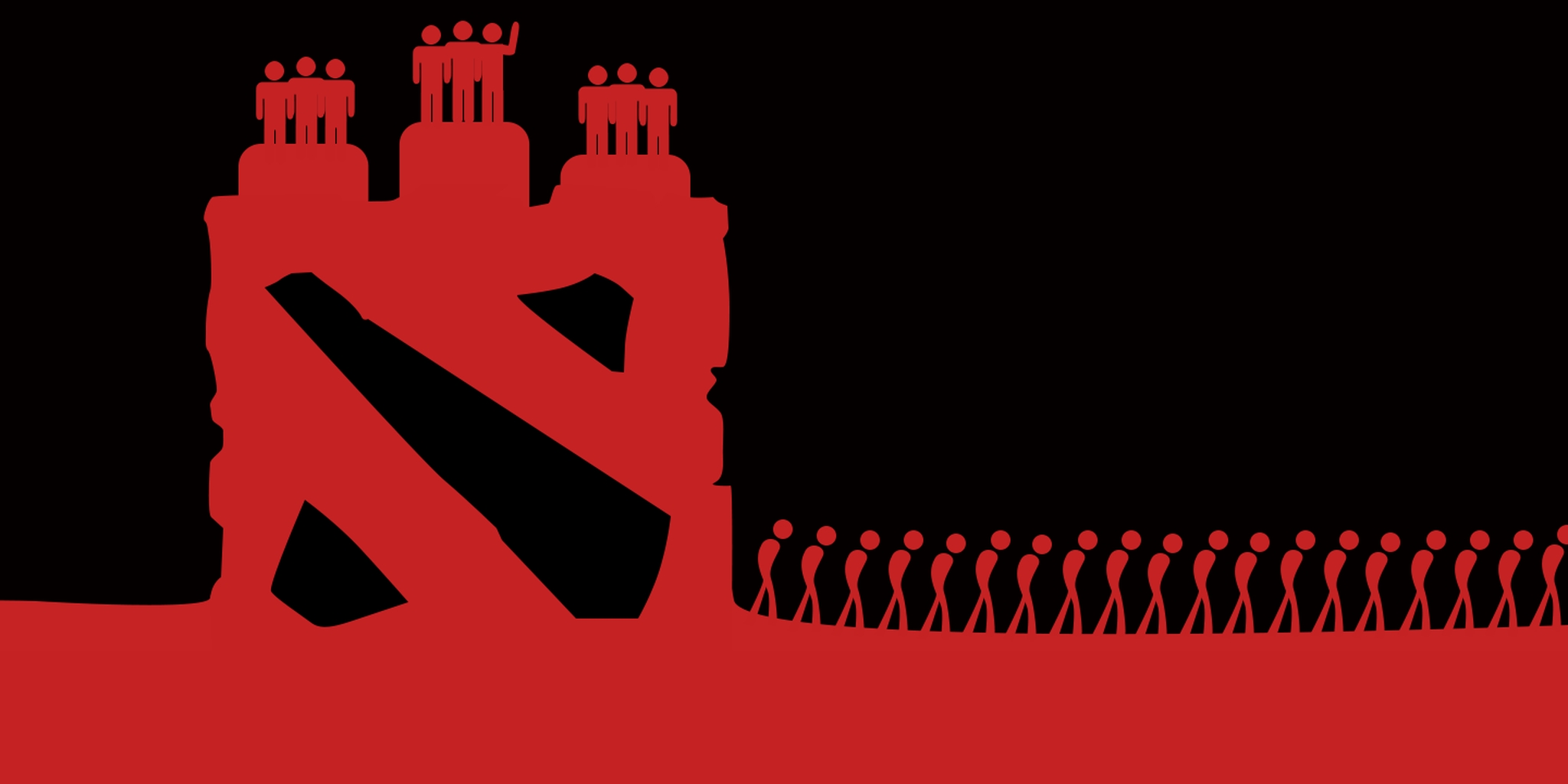 When Chinese professional Dota 2 squad Team Newbee won first place at the game’s biggest tournament last month, they had a lot of reasons to feel relieved. Newbee was one of many teams to form not long before The International, as the tournament is called, coming together in February. So it was hardly a given the team would advance to the finals, much less win them—and take home $5 million of a nearly $11 million total prize pool.

But had Newbee lost earlier in the competition, their winnings would have been substantially lower. And, like in the case of many other teams that competed in The International this year, not making it through the qualifier rounds would have meant going home empty-handed.

The International’s record-breaking prize pool—the tournament was the largest-ever in esports, by a long shot—brought attention from big names in media. These included sports giant ESPN, which broadcasted the entire tournament online and aired a 30-minute special on ESPN2.

But what you won’t hear on ESPN is this: The annual, one-off format of The International, and its merciless qualifier system, has created an imbalanced system that steamrolls teams and players who don’t perform to a certain level. At the same time, those that don’t make it have very little money to fall back on, because the prize money is so top-loaded and centered around that one event.

For a game that has given away more than $21 million in prize money, almost nothing is more important than supporting the up-and-coming teams and finding ways to make sure that they can be financially successful.

To get an idea a at the overall prize money income disparity within Dota 2 compared to other, modern esports titles, we took a look at the stats available at the excellent E-sports Earnings. Our comparison graph below looks at the prize distribution among the top 400 players for the biggest three esports in the world: League of Legends, Dota 2, and StarCraft. Note that this ignores team salaries, marketing, and other forms of income for pro players, such as streaming.

Infographic by LoLStats.gg | For the full data used in this article, see this spreadsheet.

Obviously, Dota 2 is ahead. Not only have the game’s tournaments given away more prize money—about $10 million more than the other two games—but the top 50 players of Dota 2 have all earned more than their counterparts. Taken solely on the above graph, things don’t look so bad.

However, around the 61st player mark, something interesting happens. The other two games have caught up. Those players are earning exactly the same amount as the equivalent Dota 2 player.

Dig deeper, and it gets worse. By the 100th player, Dota 2 income has fallen significantly behind, by over $10,000. And the 400th player is making anywhere from 10 to 40 times less than their equals at other games. This graph gives a better picture of how the income disparity gets bigger as we go deeper into the ranks:

In fact, if you look at the total prize money available to the top 500 players of these games, Dota 2 provides a lion’s share of its prizes only to the top 10 percent of players in the top 500. The above graph shows that of the money available to players at the same level, Dota 2 players in the lower levels make far less money compared to those who play other games. From about 200th place on down, Dota 2 players are making peanuts compared to their fellow pros.

Also notable: only 419 Dota 2 players have brought home prize money, while players of other games at that level are still earning in the thousands.

This starts to have real significance when you consider the growth and stability of the pro scene. Obviously the top 50 Dota 2 players can make a real living off esports, but what about the rest? Many esports players are young, single and very likely in some stage of their education. What does it take for them to walk away from the traditional path and brave an esports career? How much prize money income would make that decision worthwhile?

The poverty level in 2013 in the U.S. was around $11,500. Among Dota 2 players, 114 make that much or more. Meanwhile, 177 StarCraft 2 players and 227 League of Legends players earned above the poverty line if they won all their prize money that year.

In short, if these players were all in the U.S. and living off prize money alone, about 50 percent more StarCraft players and 100 percent more League players would be above the poverty line.

Players make the decision to go pro based off potential income. Those decisions become much harder to make when earnings are low. Esports players, who are often young, have to make major, life-changing commitments: Putting school on hold or to leaving their jobs.

And right now it’s easier to devote yourself to League of Legends or StarCraft 2, and not Dota 2, simply because there’s more money available at the lower levels of competition. And that simple fact has huge repercussions when it comes to maintaining a healthy amateur scene that feeds into the upper levels.

This impact can be measured in a number of ways. One particularly useful metric is something I’m calling “team health,” or the overall stability of a team and its members. Here’s a snapshot of the teams that competed at The International 3 and The International 4 next to teams who competed in League of Legends’ Championship Series, a year-long league.

The three events I looked at were:

– If a team had been formed or bought within the same calendar year of the competition.

– If a team had significant (3 or more members) roster change in the four months following the event.

– If a team has been disbanded/rebuilt following the event.

The evidence is quite illuminating: 72 percent of teams that competed at The International last year no longer exist. On the whole, The International has some trends that indicate teams build around it, then break apart if they lose.

Even if we look at this year only, eight teams have already undergone major roster changes—16 percent of the competition has already kicked the bucket.

More instability is likely in store. Many teams that lost in the qualifiers have social media accounts and Facebook pages that have gone dark in the days following their losses. As the end of the year nears (and the next round of pro teams get ready), you can expect many of these teams to announce similar roster changes—or perhaps worse, to never post an update again.

China’s New Element, for example, has a rich match history leading up to and including the Chinese International 4 Qualifiers—where they lost and thus failed to reach the main event in Seattle. Following those matches in May, the team’s home page has been abandoned, and they’ve played no professional games. Despite this, they’re currently ranked on GosuGamers as the 10th best team in China, and 56th best in the world.  (Sidenote: as 56th best, their players should be around the 280th prize-ranked players. In League, they’d be earning $8,000—in Dota 2, just $568.)

Like New Element, many teams have gone radio silent.

But what of teams that make it through qualifiers? Every single one is still intact. And while I expect there to be some roster mobility in the coming months, so far there have been no major roster changes among the top 16 teams outside of a few retirements and personnel upgrades. The solution for having a pro Dota 2 team is clear—make it to the International or bust.

Perhaps the scariest fact is simply how many teams build around the event. In 2013, 31 percent of teams formed leading up to The International 3. But this year, that number rose to 50 percent. It stands to reason that continuing to open up more slots into qualifiers, which reward zero money of the ever-growing prize pool, would only encourage more teams to start up for a desperate shot at the finals. And if they don’t make it, they can just disband, because all they had formed for was a single event.

The solution at this point is obvious: Spread the money around! Dota 2 certainly has the financial resources to support its pro players, but there’s no point having such a large prize pool if it only supports the highest tier of professionals. Every competition needs a healthy roster of underclassmen to thrive.

And right now, those players are being trampled by an unrewarding and unforgiving format.

Special thanks to E-sports Earnings, GosuGamers, and the Liquipedia for Dota 2 for their exhaustive statistical records.