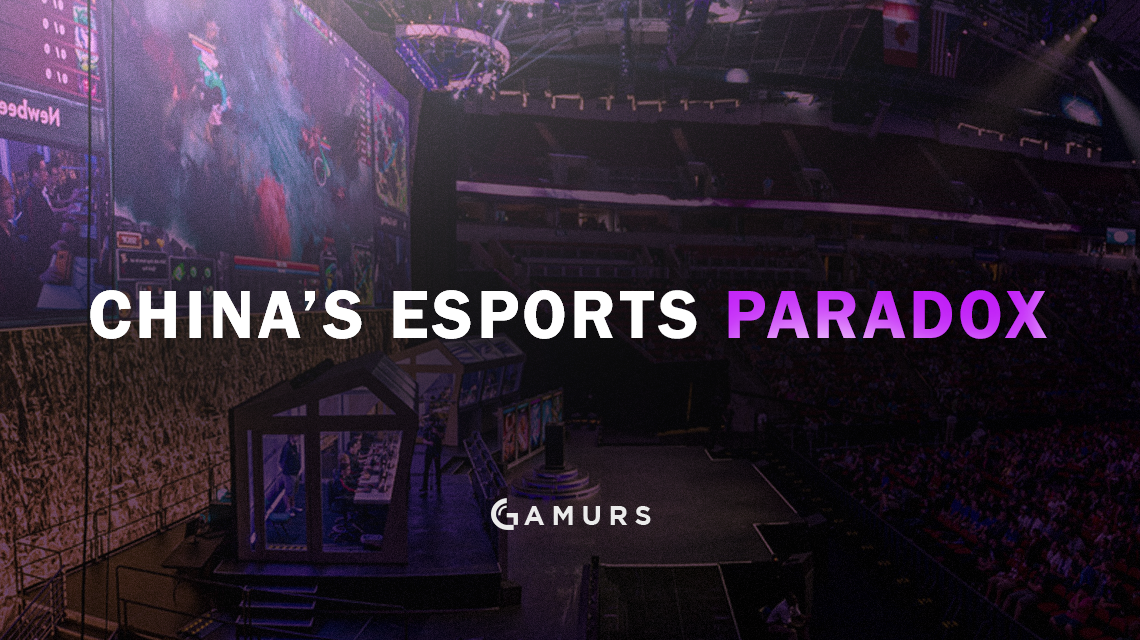 The China Internet Network Information Center estimates that close to 400 million Chinese citizens play online games. A good number of these gamers grew up in the late 1980s and 1990s, a time when playing PC games in Internet cafes was a way to assert independence. Chinese youth are subject to a rigid schooling system, in which success on a single college entrance exam is the sole factor that determines college admissions. Parents and schools often restrict extracurricular activities, focusing on test prep above all else. As such, playing games is the quintessential form of Chinese teenage rebellion, not unlike underage drinking in the United States.

The Chinese esports industry has, as a result, been plagued by the public’s overwhelmingly negative response to digital gaming, one that has been exacerbated by a media moral panic over Internet addiction. At professional tournaments, it is not uncommon to hear government officials openly proclaim that gaming has a negative effect on youth. For example, during a press conference for the 2012 World Cyber Games, a local official remarked that her husband forbade her son to attend the competition, fearing that it would impact his studies. As such, esports marketers have made a concerted effort to separate “healthy” esports games from those deemed unhealthy and “addictive.” At the Esports Champion League tournament held in Beijing in 2010, an official opened the competition by declaring that, “esports [dianzi jingji] is a sport. It must be strictly separated from Internet [wangluo] games.” This separation has carried over into the language used by average gamers, who often insist upon a division between “esports” and other “addictive and wasteful” “Internet games,” such as massively multiplayer online role-playing games like World of Warcraft. In spite of this carefully constructed division, SARFT still bans the broadcast of video gaming, including esports, on public television channels.

So how does a country that bans television broadcasts of digital games and sends young gamers to Internet addiction rehabilitation camps become a leader in the emergent field of esports?

In recent years, “soft power” (ruan shili) has become a buzzword for the government. President Xi Jinping has used the term in his official speeches and as the theoretical foundation for the “China Dream”—an amorphous concept that encapsulates neoliberal market principles, eco-conscious lifestyle aspirations and traditional Chinese values. Soft power, a concept originally developed by scholar Joseph Nye, references a country’s cultural might instead of its military might. Japan, South Korea, Taiwan and Hong Kong have become leaders in this arena, with video games, anime, martial arts films, popular music and television series from those countries gaining large followings across the globe. By contrast, mainland Chinese popular culture has largely failed to break into the global market. By tapping into the potential of their vast population of PC and Internet gamers and branding China as a major player in the digital gaming market, China may well have hit upon a strategy for rectifying this cultural imbalance.

The Chinese government has also used esports tournaments to draw tourism and positive press to locations that have received little of either. There have been high-profile competitions in off-the-beaten-path locations such as Kunshan, a technology and manufacturing hub south of Shanghai, and Yinchuan, the capital of the remote Northwestern province of Ningxia. If Kunshan’s name is familiar, it’s likely because of international press surrounding the Foxconn factories, one of the locations where Apple products such as iPhones are manufactured. In 2010, the factories gained notoriety for a series of suicides in which workers threw themselves from rooftops. The factory’s chilling response: nets to prevent jumpers from making successful attempts.

By hosting global esports events in these lesser-known regions and refocusing global attention on digital leisure, the government is trying to rebrand China as a tech-savvy nation that has as much of a stake in the tech entertainment industry as it does in the tech manufacturing industry. As of now, though, the triumphant image of the esports heroes carrying the torch of the “China Dream” remain tempered by the reality of Chinese teenagers who play Internet games despite the stigma of addiction, not to mention the tech workers who labor to produce the very devices on which the games are played.

What do you think of China’s esports paradox? Let us know in the comments below or tweet us @GAMURScom.