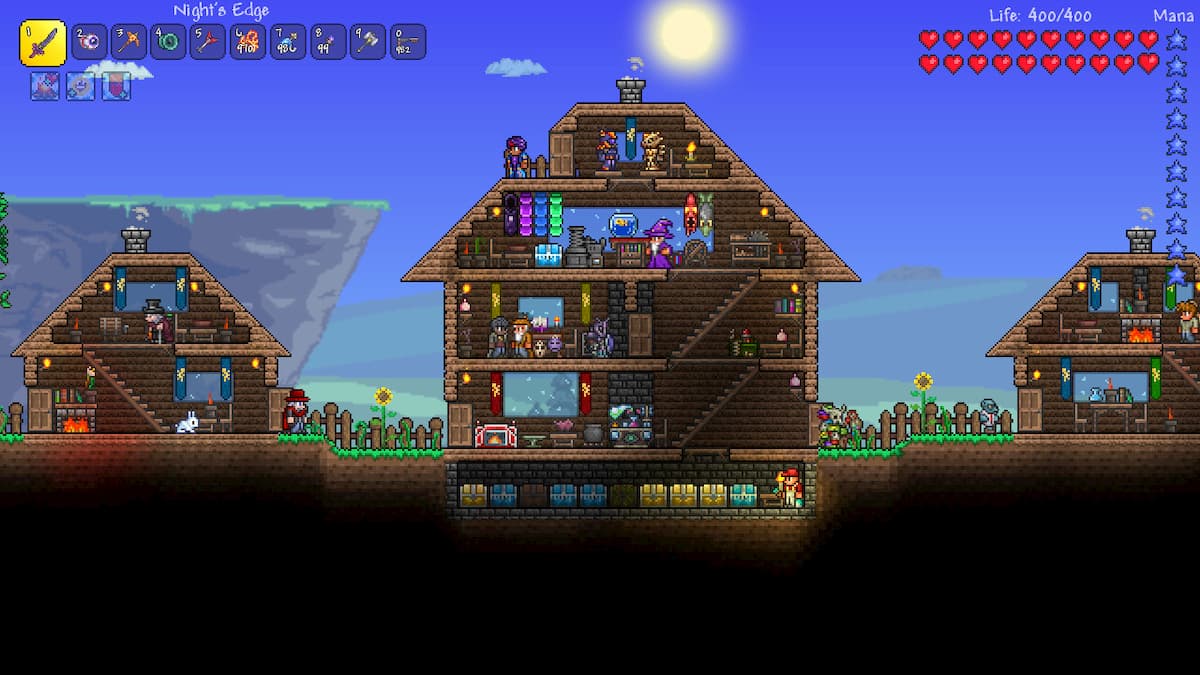 image via Re-Logic on Steam

Terraria is a popular adventure sandbox game. Upon creating a character and jumping into the world, you’re able to dig and explore the environment and biomes.

There are monsters and enemies ready to pounce on unsuspecting explorers. Dig for treasure, fight off invaders, and build your cities in a game with nostalgic and charming pixel graphics. Terraria is not the same as Minecraft but has its similarities in appearance.

As a result, looking up Terraria items and merchandise leads to a lot of Minecraft results. Iconic characters from Terraria are not the same as those in Minecraft and they are not interchangeable, despite the similar appearance. If you have a Terraria fan on your list and you’re not sure where to look, we’ve done the hard searching for you.

The official Terraria store is on Amazon. There are other branches, such as the Sanshee store with officially licensed products to look through as well. The items vary between the two sites. Sanshee has limited options but many pins that Amazon lacks. Amazon offers more toys, shirts, hoodies, and plush.

Guidebooks may have fallen out of popularity with the rise of the internet, but they often have more than just tips and tricks. There are seven guidebooks centered around surviving the world of Terraria. From crafting, to exploration, to the ultimate survival guides, there are many options for a fan that’s looking to improve or collect some offline resources. There are two main survival options: the Ultimate Survival Handbook and the Hardmode Survival Handbook. The Ultimate Survival Handbook is cheaper, designed for going through the game at a normal difficulty. The Hardmode Survival Handbook covers what to expect while playing on hardmode. New items, biomes, creatures, and bosses emerge when the game’s difficulty is increased. It is, as expected, harder and more challenging.

Guidebooks aren’t the only books from the game. There’s also a charming sticker book filled with over 500 stickers. For those looking to bring Terraria to their journals, scrapbooks, or just want to collect stickers, this is a great option with lots of potential.

A prominent part of the game is the aesthetic. The pixel sprites and side scrolling is nostalgic and visually appealing. Because the looks of the game are important, the official store offers wall decor and graphics. The wall stickers will add a nice Terraria inspired atmosphere to the room. They are small graphics that can be arranged on the wall for a subtle effect over the whole room or used in one spot to make a themed portion of the room. There is a large 33 sticker pack with a variety of items. Others are smaller and come in biome sets that range from nine to 13 stickers. The biome sets have specific animals, plants, and colors that appear in the corresponding biomes in the game.

Sanshee has a few posters that may appeal to older players: Knight Mode, Journey’s End Light Mode, and Journey’s End Night Mode. The posters are inexpensive, although cost a bit more than the majority of the sticker sets. They are 12 x 18 inches and printed on 100 lb glossy paper.

There are two items of gaming gear that would please Terraria fans: a Nintendo Switch case and an Xbox One controller shell. The protective case features the Terraria logo on a black base. For fans on the Switch, it would make a nice gift. The Switch is a portable console already and having a protective case is a good idea if they do not already have one.

The other option is an Xbox One controller shell. Unlike a skin, this hard plastic shell will replace your existing shell. And you will have to do that yourself. It’s a simple matter of unscrewing the old one and replacing it with the new one. The process isn’t hard and there are directions included with the shell.

People love displaying their games on their clothes. Hoodies, like shirts, are an option for fans looking to wear their favorite graphics. The official Amazon store has multiple options in three colors. Each hoodie can be found in black, dark heather grey, or heather grey. The graphics can be casual references, like with The Terrarian shirt featuring an armored character under a stylized tree. Because the player makes their own characters, there are no main characters to feature. Instead there are NPCs, default stand-ins, enemies, and bosses.

Not from the Amazon store, but instead found on the official Sanshee store, are various pins. These are made from metal and have a variety of options. From biomes, like Corruption, Desert, Forest, and more, to monsters and characters, such as Skeletron or the Empress of Light, to even items, there are many options to choose from.

Whether your recipient is young or an adult, a plush from their favorite game is a welcome gift. Plush can be decorative collectables or cuddly companions or alternate between the two of them. There is a handful of Terraria themed plush available on Amazon. The majority of them are iconic enemies: slime, skull, eye of Cthulhu, corrupt bunny, and a unicorn. The eye of Cthulhu is a common featured enemy in the game, shown in the decor packs as well. The plush options are very small for their price, which may put some buyers off.

A great stocking stuffer for those prone to dropping their phones is a PopSocket. These handy little attachments stick to the back of your phone to improve your grip. There are three options from the official store with different Terraria artwork on the back. They are interchangeable. If you get one you can replace the top with another you buy later. PopSockets attach to the back of your phone using adhesive to remain in place. They will work on most cases or phones, but if the case is made of a certain material or highly textured, they may not stick. The store has the Terraria tree on a black background for a simple, understated design; the day and night Yin-Yang symbol referencing the game’s unique monsters; and a Hallowed Ground one featuring the pastel colors and creatures in the biome.

Like the hoodies, shirts are a staple of the Terraria Amazon store. They come in multiple different sleeve lengths: t shirt, tank top, and long sleeved. The graphics are the same options found on the hoodies. All sleeve length options have the same graphics as well. You aren’t limited by what design you like. The choice comes down to sleeve length preference. When it comes to choosing between hoodies and shirts, there’s little difference and it will depend on the fan. Some will prefer hoodies since they can be comfortable and easily removed. Others will prefer shirts to wear all day with pride.

More shirt designs can be found on Sanshee. There are different, more artistic renditions of the same characters available, but overall less options.

Thanks to the digital era, music isn’t a common gift anymore. Most people stream their favorite songs on Spotify or Apple Music. There are still soundtracks and songs worth purchasing and gifting. Terraria’s soundtrack is just as nostalgic as its visuals utilizing eight-bit sounds for beautiful background music that will please seasoned gamers and newbies alike. There are three soundtracks from Terraria on Amazon. The songs are digital downloads, making gifting a bit of a stretch. Each soundtrack has around ten songs from the game, making the total songs about 30. They are purchased separately, however.

Not as common as Minecraft toy sets, Terraria does have a few collectors sets or toy packs available for fans that want to bring the fun to the physical world. One such pack is from Zoofy International and features six fully articulated action figures inspired by the world of Terraria. They can be left in the packaging for display or removed to play with. The set comes with six figures: guide, Tim, zombie, silver armor, Demon eye, and Slime. Other options are Toynk figures. These are officially licensed sets with multiple parts. We aren’t sure on the size of the Toynk brand items.