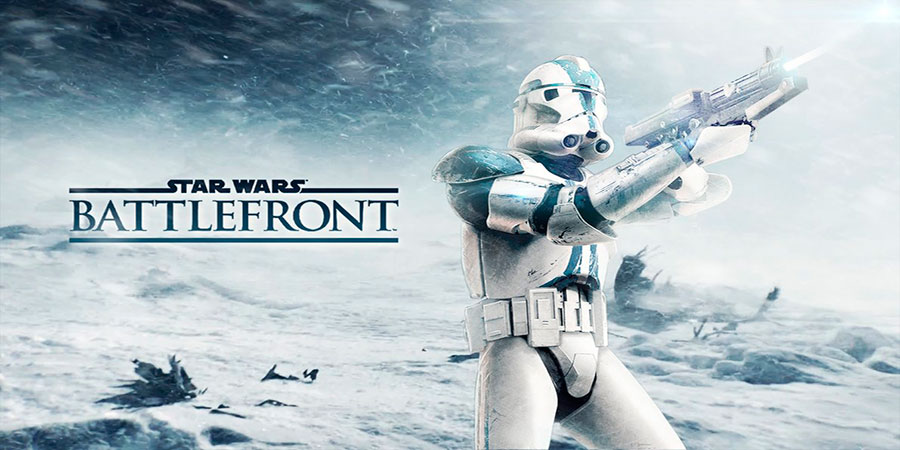 Star Wars: Battlefront is making a comeback. Or at least that’s what I hope. Scheduled for release in November of this year, the game is a modern day reboot of the first Battlefront game, with a few lost and added parts.  So let me get all the facts and information out of the way.

Unlike past titles which were developed by Electronic Arts and Lucas Arts, Electronic Arts and its subsidiaries purchased the rights to the title and handed development to DICE, Bioware, and Visceral Games. Instead of going with the traditional model of more attention on the single/multiplayer campaign with large planetary/space battles and no real emphasis on online multiplayer gameplay, DICE decided to make drastic changes to Battlefront’s configuration and functionality. Unlike past titles, Star Wars: Battlefront will not have a campaign mode. Instead, the player and/or a friend can complete cooperative missions offline, and the game now supports split screen. The game allows players to play from first or third person perspective. Much attention will be paid to graphics and making each map unique in its own way, as seen in the trailer. The game can be played in 60fps for optimal graphics, making each map detailed and gorgeous. As far as the new emphasis on multiplayer, the game will support 40 player battles. While all battles will take place planet-side, the use of pickups and vehicles (both land and air) are still included in the game. However, pickups are consumed after one use, meaning no respawning items and making it a risk-reward choice when going after them. These pickups include shields, weapons, and the new feature of being able to acquire a Jedi, Sith or major character (such as Han Solo, Darth Vader, and Luke Skywalker) as pickups laid out across the map. Also, players can customize their gear, weapons, abilities, and the characters themselves. Players will also be able to share their weapons with other players throughout the game. The game will also feature DLC content, and the first DLC to drop will be The Battle of Jakku, and will feature two maps from the planet Jakku, which ties into the events of the new Star Wars movie, The Force Awakens.

Ok, now that I got the details out of the way, it’s time to go full fanboy. I love the fact that they are making this game! I have been playing Battlefield games since they came out in 2004. I have rich memories of going to friends’ houses just to play the campaign mode of Battlefield over and over again. For a time, the game was my favorite part of the Star Wars universe. The rich gameplay, the graphics (which in 2004 were considered good), and the complex story all captivated me. I remember the story of Battlefront II followed Obi-Wan Kenobi’s Clone Captain, known as Rex, and his journey through the battles of the Clone Wars and his participation in the Fall of the Jedi. This new take on the Star Wars narrative, as well as the large scale battles and the ability to control Jedi in these battles, made me a life long fan of the franchise.

This recreation of the series by DICE is definitely different, but was needed. in today’s market, it is understandable that DICE and its affiliates would shy away from a campaign-oriented game and focus on the great multiplayer potential of the game. To be honest, the game fell off due to the lack of a multiplayer presence in Battlefront II. A player can only play the campaign mode of a game so many times, and even with an intelligent AI that avidly fought back against the player invading the universe, a shoddy multiplayer made the game a bore after a while. The multiplayer went something like this: You and some friends would pick certain Jedi or Sith and go head to head on any map (even though Tatooine was the favorite). You could pick stormtroopers, but either you were a Battlefront pro ahead of your time or just really, really dumb.

However, now that the game has 40 man multiplayer sessions with vehicles, expect the game to have a Planetside 2 feel, except with more strategic gameplay as pick up are a one-time thing and the ability to become a Jedi mid-game could tip the scales in any battle. Another interesting feature is the type of minimap that DICE decided to use. Instead of making it easy on players by using the stereotypical red dot when an enemy fires a weapon, DICE split the miniap into 4 sections that light up whenever an enemy fires, only showing the general direction from which the shots are being fired, not exacly where the enemy is. Think of the Destiny minimap, but with other actual players and not AI that are predictable (should be fun right?)

What I will miss most is the campaign mode. Shouldn’t be a surprise since I raved about it for a whole paragraph. The large -scale space battles and the feeling I got while strategically taking the galaxy, as if I had a direct influence on whether the Republic won or lost, or if the Empire held firm or fell. Despite this, I would gladly trade the campaign for the complex multiplayer experience and overall detail DICE has put into this game. Expect me to be one of the first to jump in lie for a copy come November!

By the way, I got a lot of my info thanks to the guys from Star Wars HQ, you should go check out there youtube channel: