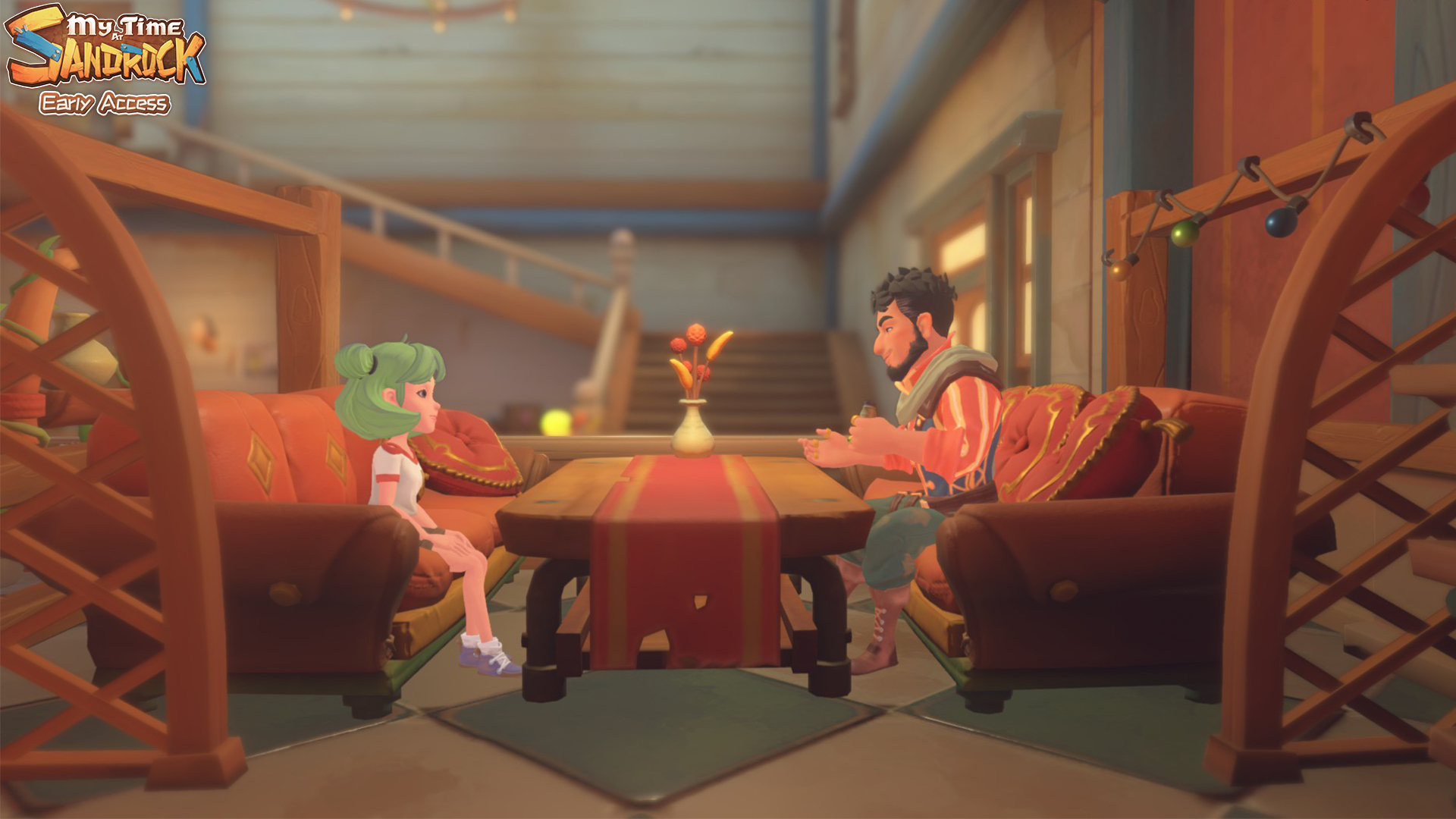 One of the big selling points of My Time at Portia was being able to romance several characters within the game. My Time at Sandrock is no different and players have a handful of romantic candidates to choose from when it comes to love.

There are 17 romanceable characters in My Time at Sandrock so far, with some likely to be added after more time developing the game while it is in early access. Some characters are romanceable in the early access build, while others haven’t even been added to the game yet.

Some of the bachelors and bachelorettes are able to be romanced, but marriage and having kids have not been added to the game yet. There is an item in Arvio’s shop that allows the player to give it to another to show how they feel about one another, but that is as far as it goes for now.

Here are all 17 romanceable characters so far in My Time at Sandrock early access. The names marked with an asterisk are not currently romanceable but will be at some point before the game comes out of early access.

Amirah is an artist and her house is littered with sculptures and paintings. She makes her own ceramics and her description in the game says that she’s starting to become more known in other places outside of Sandrock. She owns the shop Ceramic Gate, which sells pottery and sculptures.

By the Stairs shop owner Arvio is Amirah’s brother. The two of them came from Barnarock to start a new life and open up their shops. His shop is the only general store in Sandrock and it sells a wide variety of items. The player will often get delivery quests from him to help him sell his goods to customers.

Lawful good Burgess is a devotee of the Church of the Light. He also runs Water World, which is the shop the player will visit quite frequently if they want to keep their machines running with water. Burgess patrols Sandrock during the day, looking for people who are violating the law, especially when it comes to the trees. If he catches the player chopping down a tree or cactus, he will issue a fine.

This entrepreneur came from Atara after a divorce, leaving her son behind to live out her dream of running an entertainment complex called the Golden Goose. She also helps with the museum and will give the player a task to complete a relic there.

Elsie is the daughter of Mabel and Cooper, who run the ranch in Sandrock. She’s described as a loyal friend, full of vigor and passion. She helps her parents run the ranch but desires to spread her wings a little after being stuck with so many responsibilities for so long.

Players will notice that Ernest doesn’t show up right away. He only shows up in the town of Sandrock after a certain story plot, poking around about Logan. He’s originally from Atara but moves to Sandrock to write about Logan.

Fang is one of the most mysterious residents of Sandrock. He runs the clinic with his bird X and rarely talks himself. He can be romanced, but he doesn’t currently take gifts in the early access build of the game. It’s unclear if it is intended for him to refuse gifts or if something about gifting was broken with the character, so it has been temporarily disabled.

Grace works at the Blue Moon Saloon and is a hard worker there. The game describes her as smart and capable, but “the food she cooks is not very good.” She emits a lack of confidence in herself as a cook when the player first meets her.

Players will get to work closely with Heidi because she often will help with projects around the town. She runs Construction Junction, where players can upgrade their houses and build new things on their land for a fee. Heidi went to school in Atara and then came to Sandrock to become an architect. She is the daughter of Vivi and Hugo.

Not much is known about Jane yet. She was one of the Kickstarter goalposts that was reached, along with Ernest. All we know so far is that Jane is a schoolteacher who left town but returned home. There have been no reports of players finding her in the game yet, just that she is announced to be in it at some point.

Head of the Civil Corps, Justice is often seen patrolling the town for bad guys. Players will have a lot of interactions with him when he asks them for help in certain story plots. He is described as “strong and energetic” in his bio.

Mi-an is the first character players will meet in Sandrock. She’s another builder in the town who was brought in just a day before the player arrives. She is originally from Tallsky but is diligently learning more about Sandrock and helps build things for the town.

Miguel is the pastor of the Church of the Light and is described as “very clever” in his bio. He is seen moseying around town most days and seems to be simply observing the going-ons of the town.

One of the most well-known people in town is Own, the owner of the Blue Moon Saloon. He will often tell stories of the old world and holds live performances at his saloon. He also likes Sandfishing and chatting with his patrons.

Pen is one of the most obnoxiously confident characters in the game. He is the self-proclaimed “Protector of Sandrock” and likes to let people know it. He can be a bit boisterous and will sometimes make some off-kilter remarks, but many players love him for his quirky personality.

Pronounced “Chi”, Qi is a local researcher. Players will likely visit him often to research new machines to build. He will also be integral to fixing issues in the town with his brilliant solutions. He is described as a hard worker, sometimes to a fault.

Unsuur is the other half of the Civil Corps, but no one seems to know what he did before he joined them. He doesn’t stand in the spotlight too often and his bio says that he “does whatever Justice tells him to do.”

Very little is known about Venti. We do know that she works for Rocky and likes to help Amirah by sourcing her clay, but in early access, she takes the generic female model and isn’t able to be befriended yet. There is currently no indication of when she will be added to the game.