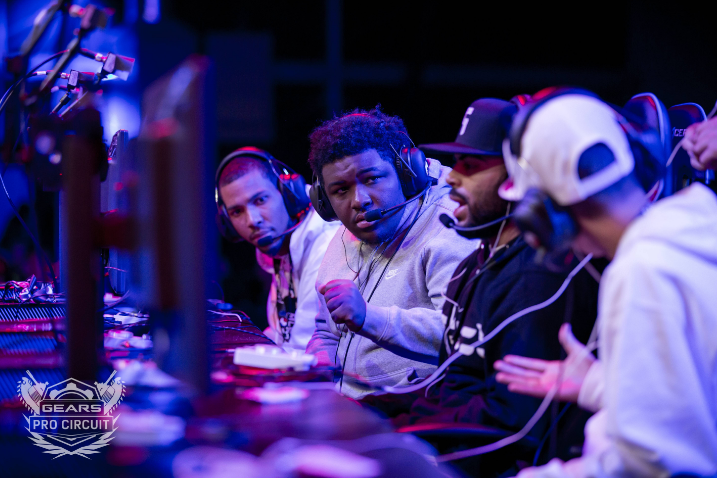 Midbox is a reference to an old Gears of War tradition of challenging another player to a one-on-one battle using only gnashers—the Gears of War version of a shotgun. Is someone talking trash, saying they’re better than you? “One-on-one midbox me.”

This is a series of interviews with various players, coaches, and developers in the Gears of War esports space so that we may learn more about them.

In the first season of the Gears Pro Circuit, we saw a host of new players enter the forefront of competitive Gears. While Dylan “Speedy” Winston, Kaid “GODPLAYS” Saleh, and Christian “RushieZ” Rivera were all in the conversation as breakout players of the season, with Speedy ultimately winning, I chose to speak to someone who hasn’t received nearly the same attention as these other players. Nevertheless, he made his own impact and climbed a ladder few manage to truly ascend.

In this edition of Midbox, Hakeema “Keem” Gordon of Ghost Gaming talked about his rise from obscurity into the upper tiers of Gears esports.

First off, let’s give a little background to those that may not be too familiar with you. How did you first get into competitive Gears?

Keem: “I got into Gears in junior high school, literally the sixth grade, and it was Gears of War 2 that my boys introduced me to. I got into competitive Gears because I got tired of being that Twitch kid watching everybody achieve their goals, and that was at the end of Gears of War 3 heading into Gears of War: Ultimate Edition.”

Tell us how you guys formed this Ghost Gaming roster. What were your expectations heading into your team’s first event together at the Gfinity Mexico City Open?

“A lot of people don’t realize this, but there would have never been a ‘Ghost Gaming’ if it wasn’t for myself, GODPLAYS, and of course, Yadiel ‘Sleepytime’ Hildago. Marvin ‘Sicamore’ Moya quit the game because of some other really great life opportunities and we had just removed Raymond ‘Rayzill’ Lopez from the roster, so that left us looking for two. GODPLAYS and I recommended RushieZ and we got him aboard as well as Bobby ‘Phenomenon’ Kenny. If you want me to be honest, I didn’t expect such a high placing only because certain personalities on the team didn’t mesh well.”

Well LAN magic must have been in the air because you guys certainly shocked the scene with your team’s high level of play, upsetting eUnited and taking home a third-place finish. How did it feel to come out and perform the way you guys did?

“It felt like a dream come true breaking that barrier and shutting a few of the critics up. After that event, we had a lot of doubters when GODPLAYS decided to leave us for eUnited and we had just replaced Phenomenon with Demarco ‘Drix’ Gaines, and Speedy in place of GODPLAYS. So a whole new roster, besides the core three in myself, RushieZ, and Sleepytime, was formed.”

What led to those changes? You guys just came out of nowhere and placed above a lot of top teams in your first event, so why did you go through multiple roster changes?

“Like I said previously, personalities on the team clashed and just didn’t mesh well. Yes, we got it together just in time for the event, but even with that great placing, we knew we were gonna make a change regardless. It’s just unfortunate that it had to be that way.”

Well, you picked up Speedy and Drix and placed third, fourth, and third again, cementing your team’s place in the upper echelon of competitive Gears. From your own personal perspective, what has this season meant to you coming up as a relatively unknown player to a player that belongs on a top team?

“At times, I feel like with all these good placings, I have to prove myself even more and be there for my teammates even more than before because now we have a reputation to uphold. And throughout all of this, coming from nothing, being in Twitch chats watching my favorite players achieve their goals, to even beating my favorite players means the world to me. It just goes to show that you could do anything that you put your mind to. With hard work and dedication, anything is possible. Nothing comes easy and I knew that.”

What are some of the things you learned as a player in the first season of Gears 4 esports?

“Composure, positivity, and believing in the people sitting beside you can go a long way. Not a lot of people believe in the person sitting next to them and that is where the second guessing comes into play. But most definitely always stay positive no matter what situation your team is in. Always find a way to build them up, even in the darkest times.”

Lastly, we have a bit of break before Season Two. What are some of the things you’ve reflected on in Season One and what do you hope to bring into Season Two?

“I just want to be the best teammate I can be and hopefully win a championship. That’s the ultimate goal. That’s what everybody wants.”