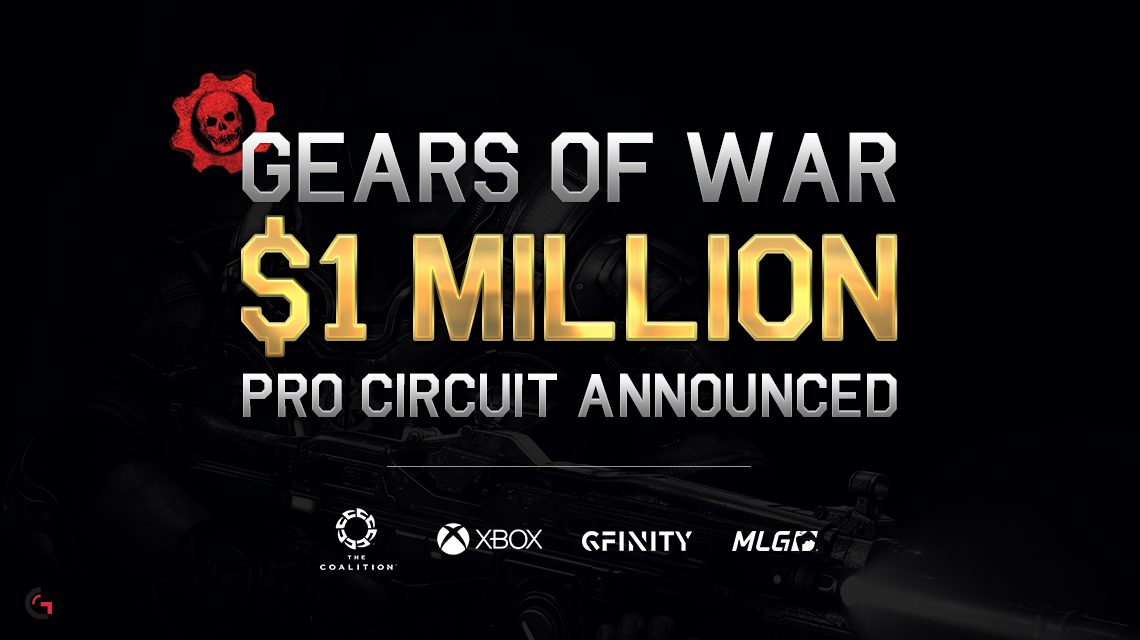 In a huge announcement for Gears of War, a long-standing esportscommunity that began on Xbox 360 back with Gears of War in 2006,Major Leauge Gaming and Gfinity are partnering for a Pro Circuit inGears of War 4 that culminates in a $1 million prize pool.

The announcement was made at the end of this weekend’s MLGColumbus Open.

The voiceover in the video detailed the events as follows:

“We’ve heard from players, fans and team owners, and areexcited to present a program for Gears of War 4 esports that willshowcase Gears of War worldwide with a focus on marquee liveevents. We know that players want to compete on LAN and we areproud to announce that alongside MLG and Gfinity, we will behosting live events every 1-2 months throughout the year. Playerscan earn Gears pro points by competing on regional MLG GameBattlesonline ladders and daily and weekly tournaments. Your Gears propoints ranking in your region qualifies you for our internationalcircuit Open LAN events. Every week, fans from around the world cantune into our weekly live broadcasts, which will feature liveshowcase matches from online tournament finals and key laddermatches. These weekly fight cards will show case up-and-comingamateur teams and/or favorite pro teams. We think thatinternational cross-play and competition is important, and so weare treating every event as a mini-World Championship. Top teamsfrom North America, Europe, Latin America and Oceania will be flownto live events around the world to compete against each other. Thisyear’s international circuit includes some exciting stops aroundthe world, including London, Paris, Mexico City, Columbus and LasVegas. Last but not least, Xbox is proud to present a startingprize pool for Gears of War esports as $1 million.”

It has been a rough road for Gears of War esports, which has notbeen relevant on a big stage in many years. This is obviously ahuge step in the right direction for Gears esports, as it now hasMLG and Gfinity at it’s back, along with lots of funding from Xboxand Microsoft, as Gears is still a huge exclusive series for thatconsole.

The Gears of War community has every right to be excited as itappears that the series might be back on its way to glory, as theoriginal Gears of War saw exposure in MLG way back when it firstcame out around 10 years ago. This has been a long time coming.

For more information on this announcement, including a scheduleof the planned LAN events for the 2016-17 season, click the link here.

Are you excited for Gears of War 4 esports? Let us know in thecomments below.

Find out more about Gears esports by following @GAMURScom onTwitter.