Star Wars TIE Fighter leaked in Fortnite files ahead of Saturday event, Risky will turn into a "stage" - Dot Esports
Skip to content 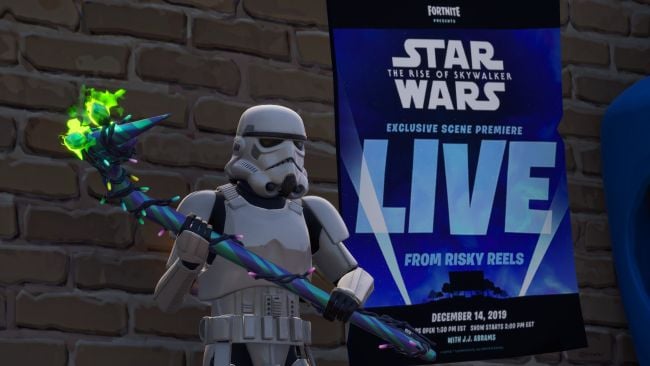 New files for the upcoming Star Wars event in Fortnite have been leaked ahead of schedule, with models of a TIE Fighter found in the game.

The leak comes from HYPEX, who has been giving out a bunch of new information about the upcoming Winterfest event throughout the day. The Twitter dataminer has also revealed what players might come to expect during Saturday’s premiere.

For starters, apart from the big TIE Fighter model, it appears that Risky Reels will be turned into some kind of stage for the premiere, likely to allow all players to cram into the area to watch the upcoming small clip of the film that will go live this Saturday.

Related: How to watch the new Star Wars scene in Fortnite

As for what the TIE Fighter will do in the game, players likely won’t be able to fly in it, unless its part of a special event. Instead, it might appear in some way during the screening, either flying overhead or as a part of the Risky Reels set.