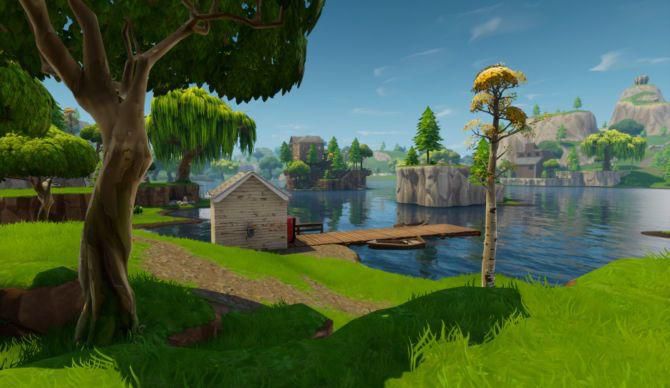 One of the worst places to drop in Fortnite: Battle Royale is Loot Lake—because despite its name, the lake is not filled with much loot.

While there are some weapons, items, and ammo that can be found in the house, the center island, and surrounding areas, the loot is pretty weak when compared to other locations on the map. Players can just as easily glide into Tilted Towers or Pleasant Park and be more prepared for the game.

The best thing about Loot Lake is the materials you can farm for, with several hundred units of wood, brick, and metal available. But similar numbers can be found in other places on the map, so there’s not much attractive about the lake.

The body of water is not only pretty weak in terms of loot spawning, but it’s also tough for players to get across. Unless the players are willing to use an inexplicably large number of materials to build a bridge across the lake, it’s going to take them a bit before they reach the other side since the water slows down players’ movement. The speed decrease also puts players at a big disadvantage if other players spot them crossing the lake, making them somewhat easy targets to pick off.

And if they’re able to get to the center island and acquire some worthwhile materials and weapons, they still have to get back to shore. That means they have to either risk getting in a fight while slowly wading through water or use some of the materials they got just moments before.

Currently, it makes little sense to drop at Loot Lake. But maybe if there was a way to speed up the process of moving across the water, it wouldn’t be as bad. And that’s exactly what inspired Reddit user sierrasloth to suggest using paddle boats.

There are already boats scattered around Loot Lake, but what if players could actually hop in one and zip over to the other side? The Reddit thread that garnered nearly 20,000 upvotes laid out a feature where one or two players could control a paddle boat at Loot Lake in an attempt to make the trip quicker, or at least a little more adventurous.

Epic introduced Shopping Carts in the 4.3 update, which gave players the opportunity to either push or ride in a trolley, making it the first vehicle in the game. It wouldn’t be a game-breaking addition if boats were introduced as the next vehicle due to their obvious limitations.

Not only would adding a vehicle for players to use at Loot Lake make the farming quicker, it might give players at least one incentive to drop around the lake. Some players are out to win the game no matter what, and they would likely be happy with a faster way to move around the area. Others just want to have as much fun as possible, and being able to ride around in a boat with friends may be a great way of doing that.

While it’s just a fan-made concept and there is no indication that Epic will implement the idea, it’s hard to imagine the developers don’t have some interesting plans to get people to stop by Loot Lake.