The sixth week of Fortnite Chapter Two, season four is quickly approaching and a new set of exciting challenges will make their way into the game. Considering how stacked this season’s battle pass is with Marvel characters, the number of players who are grinding the weekly challenges and Punch Cards has drastically increased, making it slightly harder to complete all of the quests in a single go.

Though the total number of quests available each week increased to eight compared to last season’s seven, the maximum XP you can get out of the quests was reduced by around 20,000 XP. There are still enough of them to help you max out your battle pass, however, and one of this week’s challenges invites players to Holly Hedges for a quick supper.

You’ll need to consume Foraged Items inside Holly Hedges to complete this challenge. The number of Foraged Items available in Fortnite isn’t limited to two anymore, though. Epic Games introduced Slurpshrooms, Coconuts, Peppers, Bananas, Cabbages, and Corns in the latest season, each featuring a different kind of healing mechanics.

Where to consume Foraged Items at Holly Hedges in Fortnite

Gathering the Foraged Items won’t be enough to complete this quest. You’ll need to make sure you consume them either directly from the ground or through your inventory.

Holly Hedges is mostly populated by Cabbages, which heals players for 10 HP over two seconds. You won’t be able to consume a Cabbage if you have full HP, so you’ll need to reduce some of it before you start chopping away at Holly Hedges’ seasonal harvest.

The easiest way to lose HP in Fortnite is jumping off of a height that you can build yourself via materials. Simply build three to four connected pieces of stairs and jump off to lose some of your HP and start consuming the Cabbages to complete the quest. You’ll need to eat five of them, so reducing your HP to at least 50 should be more than enough. 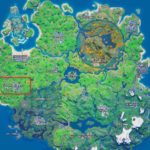 To find some grub, we recommend checking the backyards of each house in Holly Hedges. It looks like the residents are quite keen on gardening and Cabbages are almost present in every household.