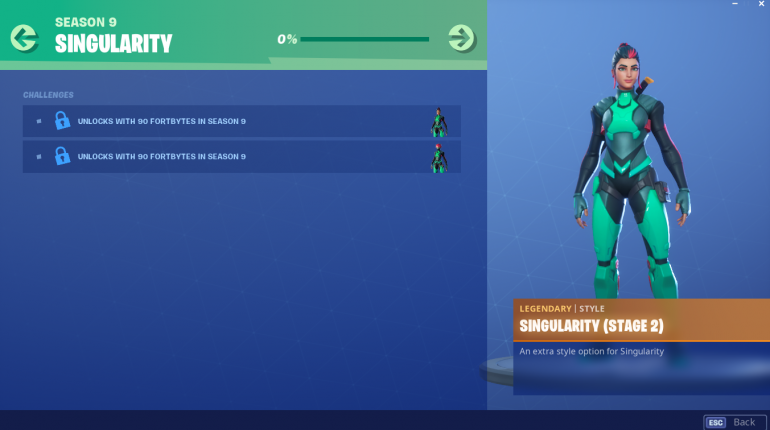 Fortnite’s season nine exclusive skin Singularity has been revealed, and players can finally unlock it.

Singularity is the skin from the Utopia challenges. Players have to collect 90 Fortbytes to make it permanently available in the Locker, which means only those who have the premium Battle Pass can get the Utopia skin. Since the free pass has no Fortbytes, it’s impossible to get Singularity if that’s what you have.

Singularity seems to have additional styles that players can unlock by finding different helmets spread across the Fortnite island. Those who own Singularity must be using her outfit to interact with these helmets and, upon leaving the match, will permanently unlock their respective styles.

Besides these styles, players can choose between using Singularity with or without a helmet on. Her suit also changes colors depending on the styles you’ve unlocked.

Finding Fortbytes is the only way to unlock Singularity. Season Nine has no exclusive skin for completing standard weekly Battle Pass challenges like many previous seasons had, so you don’t need to rush these challenges for now.

The Utopia challenges will be available until Aug. 1, which will be the last day to grab Fortbytes and unlock Singularity and any of her styles. That’s when season 10 will start, which means players will be unable to get anything that’s exclusive to season nine, including anything about Singularity. Anything you’ve unlocked will stay with you, though.

Since Singularity is a character skin bound to a challenge, it’s impossible to gift it to other players or to receive it as a gift. It’s also likely that it won’t return to the Fortnite Item Shop after season nine ends, as Epic usually doesn’t sell old Battle Pass skins there.