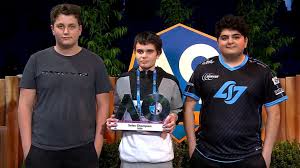 Professional Fortnite is dominated by players using keyboard and mouse because of the more-precise controls, but outliers like Breso have proven controllers have a place in the competitive meta. He is the first player to win a LAN tournament with a controller in the three years of competitive Fortnite.

Breso is a lesser-known player who hails from the Oceania region and is currently unsponsored. He performed well throughout the entire tournament and was able to secure a total of six eliminations, four of which occurred in the final moments of the match.

Breso’s use of a controller has brought up the aim-assist debate and if it provides an advantage over players using keyboard and mouse.

Aim assist is a normal feature in most shooters on console to compensate for the restrictive movement of thumb sticks. The aim assist slows the players movement when tracking an enemy and makes it easier for console players to aim. This feature is not available for keyboard and mouse players and prominent streamers such as Tfue have addressed it in the past but also clarified it is not a complete advantage.

“Controller players will still say they are at a disadvantage though.” Said MackWood. “However I am very happy for @BresoFN it is just unfortunate he won on controller so his achievement will be defamed.”

Regardless of Breso’s use of a controller, he was able to dominate the competition and take home a prize of $100,000.