A Fortnite rune at the Loot Lake vault is deactivated again

This could point to another Unvaulting event in the future. 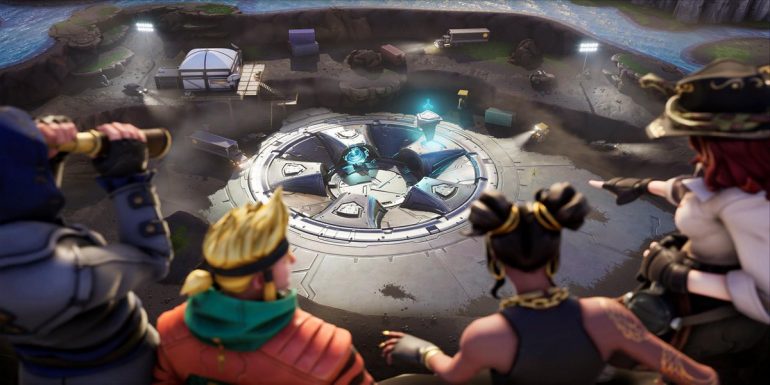 One of the five Fortnite runes at the Loot Lake vault is deactivated again for some mysterious reason. The Unvaulting event already happened last weekend, but it seems that it might not be the last event to happen related to the vault.

A Reddit user posted an image of the vault where four runes are still lit up from the event, but one of them is strangely dark. This particular rune looks like it did prior to the Unvaulting event and its activation. It’s a strange occurrence that has players wondering if this means that a similar event will happen again.

The rune could be deactivated because of the event, leading players to believe that there might be four more events. Considering that there were six vaulted items available as options during the previous event, this isn’t too far-fetched. At the same time, though, there could be a much simpler explanation behind this deactivated rune.

This could just be a bug, similar to the recent Shadow Bomb glitch. Fortnite is no stranger to weird bugs, so this could be nothing more than the game unintentionally deactivating the rune.

Another explanation? Epic had to deactivate the rune.

It is possible that leaving all five runes active causes issues for the game or makes the Unvaulting event continue. Reverting the game back to what it was before the event might have been necessary in this case. After all, the event wasn’t even a total success in the first place. There were many players who didn’t get to participate, despite being online at the right time.

Epic has yet to comment or acknowledge this strange occurrence.