The tile should be harmless anytime soon. 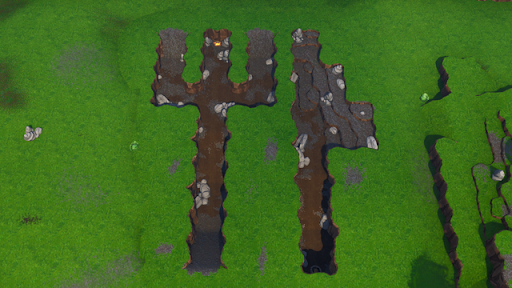 Fortnite: Battle Royale players who went to the area near Fatal Fields known as Fork Knife after the v8.01 update might have had a surprise.

Players found an instant kill tile near the edge of the knife blade in that area. Any player who stepped on this tile would die instantly and with no apparent reason. Other tiles of the knife seem to be working as intended, without causing any random deaths. Epic Games has acknowledged the issue in a Twitter post and said it’s working on a fix to it soon.

This is one of the very few times Fortnite players ran into a literally fatal bug. Players are used to seeing minor bugs after updates, and sometimes bugs that are even bigger and cause servers and matchmaking systems to crash. A bug that just kills players in a specific area instantly is not something they see every day.

The Fork Knife area would be uninteresting if it wasn’t for this bug. It’s just a rocky area north of Fatal Fields that forms a huge fork and a knife down on the ground with several stones spread on them. Players would only find the Fork Knife area useful to find some floor loot and to farm lots of Stone.

If this instant kill tile is something simple to solve, some players might see it gone before they test it themselves in a match. Just in case, it’s best to avoid the edge of that knife until Epic says it’s now safe to play in that area.