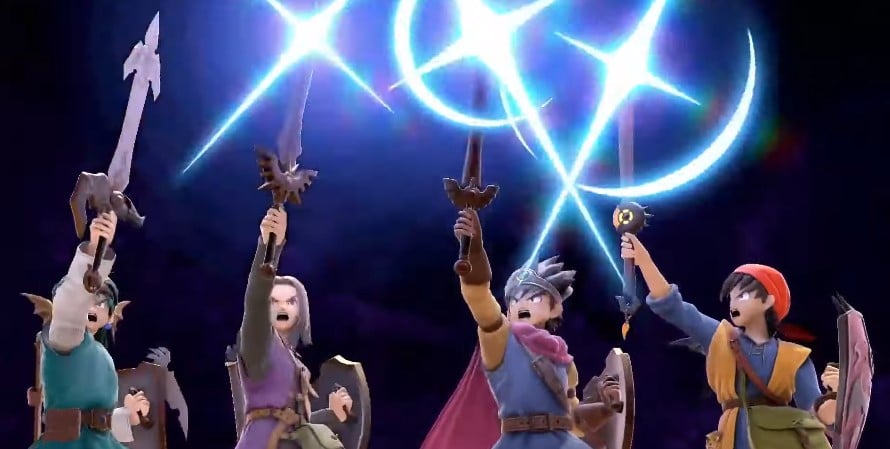 The next character coming to Super Smash Bros. Ultimate through the Fighters Pass DLC is a character called The Hero.

Representing the legendary classic Dragon Quest franchise, The Hero isn’t just bringing one character to Smash, but rather he’s a collection of four protagonists from four different Dragon Quest titles.

Each character will have the exact same moveset, but they will have unique looks and voice lines that match their characters from their respective titles. Animations haven’t been shown in detail yet but are expected to also be the same—barring a few taunts.

Every hero and heroine from the Dragon Quest series is denoted by something from their game that describes their powers or abilities rather than an actual name. However, all of them are collectively called Erdrick as a form of title.

The first version of The Hero shown is the one that casual fans will be the most familiar with. Representing the newest title in the franchise, Dragon Quest XI: Echoes of an Elusive Age, the hero known as The Luminary will join the battle.

Dragon Quest XI is coming to the Nintendo Switch on Sept. 27 with a special version of the game made to run on the console and with some extra content. Showing off the freshest face and the character most players will be using in the next adventure was a good call.

From there, it was all throwbacks from older titles, two of which old-school Nintendo fans might have actually played back on the NES.

Dragon Quest III: The Seeds of Salvation included one of the first instances in which the term Erdrick was shown to have meaning. The title is bestowed upon the main character once he or she beats the game. That’s led to the first three Dragon Quest games being referred to as the Erdrick Trilogy as a way to show they are all connected in the same storyline—kind of.

The hero of Dragon Quest III doesn’t carry a title such as The Luminary, leading to him being referred to as just Erdrick.

Dragon Quest IV: Chapters of the Chosen is the other NES representative, bringing the character known as Solo to the battle. This name is the default name the male character has when the player gets a chance to name their hero, while the female option starts with Sofia.

Solo, at 18 years old, is canonically slightly older than most other protagonists, and his name may or may not be a reference to Star Wars considering how many Square-related RPGs put those in around the time—just look at Chrono Trigger.

The last of the quartet is the hero called Eight from Dragon Quest VII: Journey of the Cursed King. A low-ranking royal guardsman known for his lack of any armor and iconic red bandana, Eight is literally named after his game and has no other title that fans have latched onto over the years.

This pick was a little out of the blue considering it was originally a PlayStation 2 title rather than a Nintendo one, but it did later come to Nintendo 3DS when it was remastered, which is likely why he was the fourth choice.

Now you’re all caught up on at least the basics of each character and what each one is named, so you won’t go messing it up in the character select screen. Or you can just call them Goku like most of the internet has been doing, which isn’t actually that far off considering Dragon Quest’s art is also done by Dragon Ball’s creator, Akira Toriyama.

The Hero will join the Smash Ultimate roster later this Summer, followed by Banjo-Kazooie in the Fall.