One of the original developers and publisher of Melty Blood, Type-Moon revealed earlier today in its Ace magazine a new title is being worked on.

Melty Blood – Type Lumina is set to release later this year on Nintendo Switch, PlayStation 4 and 5, and Xbox One and Series X/S, though Type-Moon is no longer listed as a developer.

The company, which is known for developing and publishing visual novels, will still publish the new game alongside Fate/Grand Order developer Delightworks, however.

The other OG studio French-Bread, which also created another popular fighting game Under Night In-Birth, is still working on the game, and it will feature rollback netcode.

Since the reveal via magazine, only screenshots and brief snippets of information, provided by Twitter user and translator BananaShiki, are available, including the confirmation of Shiki Tohno, Akiha Tohno, Arcueid Brunestud, and Ciel returning for Type Lumina’s roster.

According to Gematsu, the game is going to feature a smaller cast of playable characters and the developers will focus on interactions between each fighter.

This means some characters won’t be making an appearance in the game because it takes place between versions of the Tsukihime visual novel series, part of the game’s source material. Sion Eltnam Atlasia, the main character of previous Melty Blood games will be one of the fighters excluded from Type Lumina since she does not appear in the timeline being used for this game.

This will be the first new Melty Blood title released since Melty Blood Actress Again Current Code in December 2011, though it didn’t release outside of Japan until it came to PC in April 2016. It will also be the first French-Bread developed title to utilize rollback netcode. 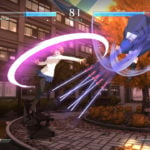 Type Lumina will feature three single-player modes, Story, Time Attack, and Survival. Each character included in the game will have 10 different color schemes that players will be able to customize.

The game aims to carry over the classic features that define the Melty Blood series, but Type Lumina has a battle system that has been largely “rebuilt from the ground up.” This includes the “Rapid Beat” system, which will allow players to execute combinations with repeated presses of the attack buttons.