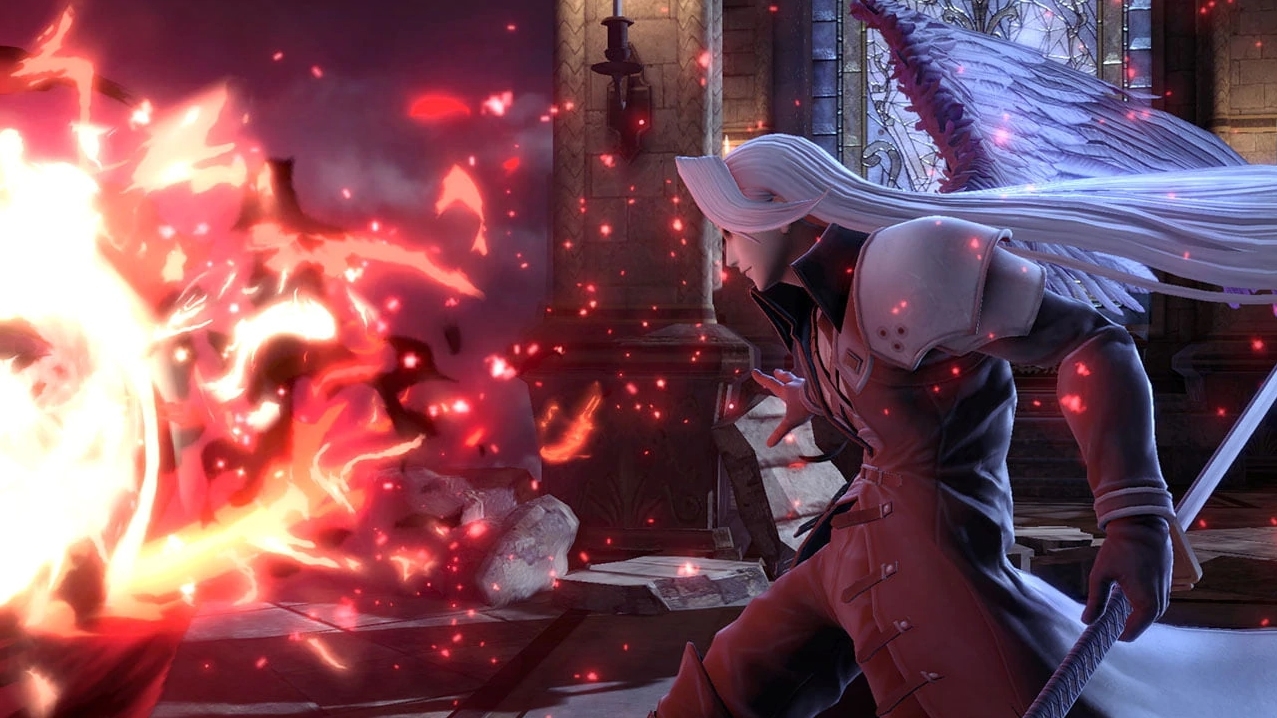 Sephiroth has joined Super Smash Bros. Ultimate as the second representative from Final Fantasy VII and is bringing another unique approach to a sword-fighter character to the roster.

He isn’t breaking any new ground with his moveset, but the One-Winged Angel does implement several elements from other fighters in Ultimate and makes them his own, while also carrying around the longest sword in the game.

Before getting into his moves and how you can utilize them, you should know that Sephiroth is actually a lightweight fighter, being tied with the likes of Kirby, Pikachu, Mewtwo, and Olimar as the seventh lightest in the entire game. He is faster than the average character too and has the 11th fastest falling speed.

Despite his weight, he still feels like a heavy-hitter thanks to the impact of his sword, Masamune, which allows him some of the longest melee range in the entire game. The sweetspots for his sword attacks also differ depending on if you are jabbing or swinging the blade.

For slashing attacks, the sweetspot is located in the center of the blade, while the sourspot is at the handle, and stabbing attacks have the sweetspot at the tip. Typically this means that hitting someone with the sweetspot of an attack will deal somewhere between an additional one and four percent depending on the attack.

In general, Sephiroth has a good moveset for spacing out opponents with his ranged options allowing him to cover every direction reliably outside of directly below him when he is in the air.

With all of that in mind, here is a basic overview of how to play Sephiroth, starting with his Special moves and then moving into a more detailed approach to his other options. Just be prepared for a lot of short-hop movements and trying to space out your opponent.

Sephiroth wouldn’t be complete without a devastating projectile that can deal insane amounts of damage while also covering varying distances and ending in different explosion radiuses depending on how long you charge it.

Flare travels a great distance but does less damage. Megaflare shortens the distance and increases the damage. Gigaflare will only go a short way after being fired, but will result in a massive explosion that can occasionally KO opponents at as low as 20 percent if they are hit close to the edge of a stage.

You can’t store charges for this move, but with how often Sephiroth will be playing at a distance and knocking opponents back, there will be plenty of time to fire off several blasts in a match, especially when you can use it to ledge guard.

Side B (Shadow Flare)

Shadow Flare is another projectile, but this one is more of a utility than anything else and will mostly see use as a combo extender or a way to pressure your opponent to stay on the stage.

If you connect with the short-ranged blast that Sephiroth creates by snapping his fingers, your opponent will gain a sphere of dark energy traveling around their character. You can have up to five of these spheres circling them at a time, and after a handful of seconds, they will all hone in and deal damage.

This move can be charged, and if a charged version of the attack hits, it will deal more initial damage and spawn more spheres around your opponent with a single strike. A player can block these by shielding, but if they are in the air and have more than one sphere, it is very likely that they will be hit.

In a weird mix of Firefox and Illusion, Sephiroth’s Up B can be used as a short and fast dash to cover ground on a stage, recover, or deal a simple strike to his opponents. When charged, it turns into Octaslash, one of his signature moves and something that can easily KO opponents if they are hit by it.

While charging, you can change the direction you plan to move in by simply pointing your control stick where you want Sephiroth to travel before he beings moving. This is a great option for chasing opponents down and will also be your main method of recovery, which is good since it is a solid option for that too.

Be careful because there is some landing lag and other issues with using it on stage if you don’t connect with your target, and the reliability of snapping to the ledge is hit or miss at times.

Acting as Sephiroth’s version of a counter, Scintilla is going to take some work to master, since it is unique in several ways compared to other counters in the game.

Even if Sephiroth is not attacked, using Scintilla will still result in the move triggering and potentially damaging an opponent lightly. It can only block attacks made from in front of Sephiroth and will break if a move above a certain power hits it. Though even if it does break, Sephiroth won’t be stunned or take damage unless the move is a multi-hit attack.

All-in-all, it isn’t bad but will be very situational just like most of the other characters that have a basic counter, such as Ike, Lucina, and Marth.

All of Sephiroth’s tilt options are solid, especially the combo setups that his sliding Down Tilt can provide. Similar to that of Mega Man, Cloud, and Joker, he can slide under certain attacks and strike an enemy with his forward momentum.

Up Tilt is very particular in its hitbox, but it can deal a lot of damage and covers a large range directly above Sephiroth, even managing to hit the top platform on Battlefield. Just like Marth, if an opponent is near Sephiroth on the ground when he uses this, a weak hit can pull them up into the main attack, which is strong enough to KO some opponents from 85 percent depending on their weight and position on the screen.

Forward tilt is the most standard of the three, and simply throws out a swing with Masamune. His startup is slow like Ike’s own version of the attack but can deal big damage, is angled, and covers a great distance.

Sephiroth has range, and none of his options emphasize that more than being able to cover entire platforms with his Up Smash. A clean hit at the sweetspot can deal an insane 17 percent and is hard to punish because the end lag isn’t terrible.

Down Smash is a shield breaker and can be used as a great on-shield pressure option in combination with moves like his Neutral Air and Up Smash. Forward Smash is basic but can kill at low percentages despite the heavy startup and end lag.

Throws might be where Sephiroth is at his weakest. Since he does have some decent combo throws, his grab range is among the lowest in the entire game. He can combo out of some Down Throw and Up Throw scenarios, but when you look at his other options, you are better off focusing on ranged attacks rather than getting in close most of the time.

Initially, it looked like Sephiroth might suffer from a lackluster Neutral Air attack, but once players actually got to test it out, it was way better than anticipated. Using it can essentially connect into any of his other aerial options and can sometimes lead to devastating follow-ups, including Smash attacks when it is used close to a platform thanks to the character’s range. It can even combo into itself multiple times without risk of being broken up.

Forward Air is going to be used as a spacer, giving fantastic range as long as you can time it correctly. It also allows players a solid way to kill off stage or pin themselves to a stage’s wall to give him more recovery options.

Back Air works just like Forward Air, in that it has a slow startup but incredible range. It does more damage overall but is slower, though that doesn’t stop it from being a great combo extender or finisher.

Down Air is the most divisive of his options, since it’s his iconic downward stabbing animation that pierces deeply into the ground. It briefly has him stall in the air, which can give opponents time to recover, but it also powerfully meteor smashes aerial opponents. It can stab through platforms and the edge of stages like Battlefield, which lets him kill opponents offstage without chasing them.

One of the most unique things about Sephiroth is his One-Winged Form.

This works like a mix of Joker’s Arsène and Terry Bogard’s Super Special meter, where at a certain percent of damage, Sephiroth will sprout his black wing to give himself a boost in speed, strength, and an additional jump. Additionally, all of his Smash attacks gain a 20 percent super armor boost to tank through interruptions.

It works differently to both of the special meters because the One-Winged Form will only activate at certain percentages, but they change depending on the situation of a match.

If Sephiroth and his opponent are even in stocks (or points depending on the game mode) he will gain this form at somewhere around 70 or 80 percent. If he has a stock advantage, he won’t gain it until he breaks closer to 100 or 110 percent damage, while if he is down something like one stock to three, he can get it at as low as 35 percent.

Overall, Sephiroth is an interesting character that brings a lot of unique elements to the Smash Ultimate roster, even if he is another sword fighter. His range, solid options, and combo potential point to him being a character that some players will at least try to pick up, but his inconsistency at securing kills and fragility might limit him.