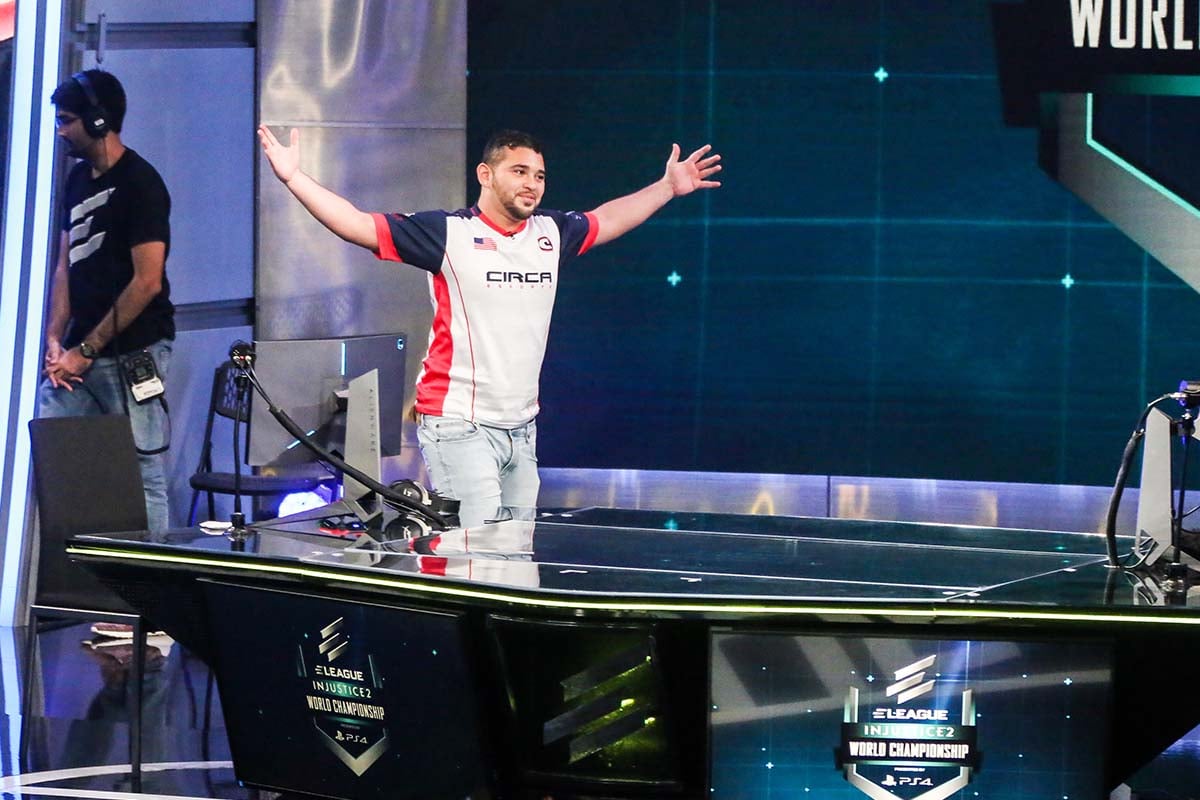 Ryan “Dragon” Walker and Christian “ForeverKing” Quiles took the top two spots in Group A of the ELEAGUE Injustice 2 World Championship on Friday to advance to the finals. Their success came at the expense of third-place finisher Dominique “SonicFox” McLean, who entered the tournament as the game’s undisputed top player.

ForeverKing technically finished in second place on the day, but he was the story of the night. He opened the tournament by beating SonicFox 3-1, then erased a 0-2 deficit against Tim “HoneyBee” Commandeur to defeat him 3-2. He lost to Dragon 3-1 in the winners final, but advanced to the finals with another 3-1 win over SonicFox.

“Beating the best player in the world two times in one day is pretty insane,” ForeverKing said in a post-match interview. “I’m on cloud nine.”

The second-place finish continues ForeverKing’s magical run over the past week. After a disappointing 0-2 performance at the Injustice Pro Series Finals, he had to survive a last-chance qualifier last Saturday to earn a spot in the competition. He has clearly made the most of that second chance.

Dragon’s run to the finals was less dramatic. The Evo champion scored a pair of 3-0 victories over Michail “Bambooka” Shpichko and Daris “DR Gross” Daniel, then beat ForeverKing 3-1 to win the group.

The lack of drama suits Dragon just fine, as both he and ForeverKing have guaranteed themselves a minimum of a $10,000 payday. Dragon will face Group B’s runner-up in the opening-round match on Nov. 10, while ForeverKing will open against the Group B winner. Whichever player emerges victorious on that day will walk away with $150,000—the largest prize ever awarded in a tournament for a NetherRealm Studios game.

As for the man widely expected to win the finals, things didn’t go as planned. SonicFox won the previous eight Injustice 2 tournaments he entered, including last month’s $200,000 Injustice Pro Series Finals. He was a heavy favorite to stretch that streak to nine and win the $150,000 first-place prize at stake in this event.

Those predictions quickly came unraveled on Friday. He suffered a 3-1 defeat to ForeverKing in the opening match of the tournament, as neither his Red Hood nor his Captain Cold could find an answer for ForeverKing’s Batman. Their losers final rematch followed a nearly-identical path on his way to another 3-1 defeat.

Even in his wins throughout the rest of the tournament—over Jorge “HeeyGe0rge” Castro, DR Gross, and George “Nubcakes” Silva—he looked mortal. He started slow in every match he played, losing the opening game in each of his five sets on Friday. He had to win three do-or-die games to even reach the losers final.

Shortly after the match, SonicFox admitted that he had given too much attention to the recently-released Marvel vs. Capcom: Infinite, but still gave full credit to the two players who bested him.

SonicFox took home $4,000 for his third-place finish on the day, while Nubcakes earned $3,000 for finishing fourth. HoneyBee and DR Gross tied for fifth place and earned $1,000 each.

Bambooka and HeeyGe0rge, both last-minute additions to the World Championship lineup, tied for seventh place after going 0-2 on the day. Both players finished in fourth place in their respective qualifying circuits, Path To Pro and Liga Latina respectively. They were invited to participate after high-placing players in both circuits ran into visa issues and were unable to enter the United States.

Bambooka’s inclusion was somewhat controversial. Shortly after his fourth-place finish in the online Path To Pro finals, a competitor accused Bambooka of allowing another player to compete on his behalf. ESL, the organization who ran the Path To Pro, didn’t find conclusive evidence of cheating and allowed Bambooka’s placing to stand.