The newest Super Smash Bros. Ultimate fighter, Minecraft Steve, is bringing variety to the game with both his moveset and the alternate skins available in place of the usual eight different color variants for other characters.

This has become a pretty common practice with Hero from the Dragon Quest franchise also having most of his alternate colors feature different character models from his series.

Nintendo adds these little details mainly to give players options to slightly change how their favorite character looks. But in the case of Steve, it’s a fun way to give a series more representation in a lone fighter. Series creator Masahiro Sakurai and his team love sneaking in hints and references to the original games and they got to do so directly with their newest addition.

Here are all of the alternative skins for Steve and a few details on what they represent from the Minecraft franchise for those who don’t play the game.

This is the default male skin for the Minecraft series, which was named Steve partially as a joke by series creator Markus “Notch” Persson. It was later made canon on the official Minecraft website when players went to change their character skins.

Basically, any player who didn’t select a skin before starting their adventure in a Minecraft world would be seen as either Steve or Alex, the other default option.

Alex is the female equivalent to Steve who was also featured as a default skin in most iterations of Minecraft. The main difference outside of their design is the fact Alex has thinner arms and an overall slimmer appearance than Steve, which is mostly due to her model being based on the “slim” skin style.

This one is pretty self-explanatory but the Zombie skin is just that, a skin based on the classic Zombie mob that players have to survive against when playing Minecraft. Knowing Sakurai, there could be unique noises and a few animation changes made to differentiate it a little bit from the other skins.

Usually neutral unless provoked, this shadowy mob is joining the fight as another alternate skin. Much like the Zombie, there will probably be some changes to animations and sound effects to make this feel like a more fleshed-out option. 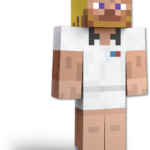 The remaining four skins are all male or female variants that are available to players who play the Console Edition of Minecraft. None of them have a distinct backstory, but each should give everyone playing the new character an alternate option that they can enjoy.