All 21 of The Hero’s Command Selection spells and how they work in Super Smash Bros. Ultimate

This is a long list of spells Smash players need to learn. 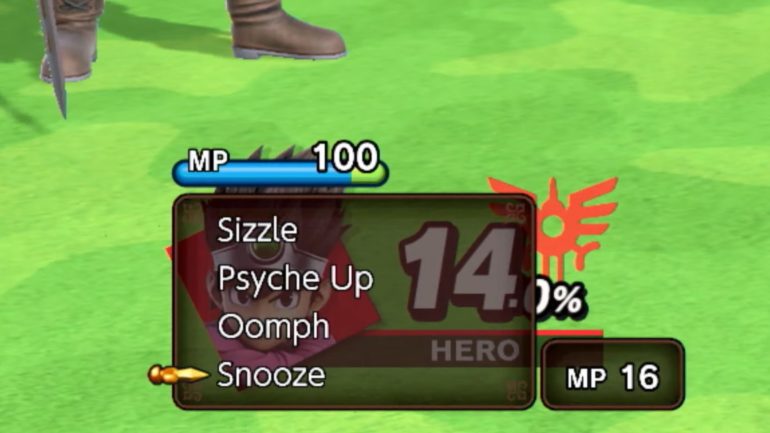 Along with scaleable special spells mapped to his Neutral B, Up B, and Side B, The Hero from Dragon Quest has a pool of 21 spells that come up in random groups of four when using his Down B—Command Selection.

With so many spells that each do different things, this is a list of each move, its MP cost, and the specifics of what they do for you to use as you try and master the newest Super Smash Bros. Ultimate fighter.

When selecting a spell, Hero stands in a pose as if he is thinking about the decision himself before launching whatever move is chosen. Each of these spells displays the MP required for use and how much of a dent that will make into your reserves so you won’t be left guessing.

Unlike the other three spells readily available for players to toss out whenever they are needed, Command Selection brings up a menu of four spells pulled at random from that group of 21. The player then scrolls through the list and can select the spell they want to cast.

The main issue with this move is how random the actual execution is. Not only is it a random group of four spells, but some of the effects can also be randomized too. Most of this can be curbed by mastering shield canceling out of the selection menu, which resets the menu with four new spells.

Heal (7 MP) – Heals Hero of 11 percent damage, but if used repeatedly might disappear until Hero takes a stock from his opponent.

Oomph (16 MP) – Raises damage of all attacks for 10 seconds while also decreasing defense.

Psyche Up (14 MP) – Raises the damage and knockback of Hero’s next attack, will last until a move fully connects or is blocked by an opponent’s shield.

Hatchet Man (15 MP) – A powerful swing of Hero’s flame coated sword that will always score a critical hit and can shatter shields in one blow if it connects.

Kacrackle Slash (11 MP) – With a sword coated in ice, Hero slashes forward in a wide arc, dealing damage and freezing any opponent that is hit.
Metal Slash (6 MP) – An attack that will instantly K.O. any opponent coated in metal, but will only deal one percent of damage to any non-metal enemy.

Thwack (30 MP) – A move that can instantly K.O. an opponent in the way of Hero’s swing, with a higher chance to hit the more damage the enemy has. Otherwise does little to no additional damage or knockback. Won’t appear if Whack does

Whack (10 MP) – Another one-hit K.O. move similar to Thwack but even less likely to connect at lower percentages. Also does little additional damage or knockback.

Bang (9 MP) – Hero throws a small explosive attack in front of him which slightly pulls nearby enemies closer and explodes.

Kaboom (37 MP) – A much bigger, more damaging version of Bang that has greater gravity and explosive area. Does damage comparable to a fully charged Kafrizz. Won’t appear if Bang does.

Sizzle (20 MP) – A more powerful version of Sizz that does more damage and travels further. Won’t appear if Sizz does.

Snooze (16 MP) – Launches a sphere ahead that puts any enemy in its path to sleep. It can travel through and hit multiple enemies and the closer the enemy that is hit, the longer they remain asleep. Any opponent hit while airborne will still be affected.

Bounce (14 MP) – Surrounds Hero in a purple glyph and will reflect any projectiles that would otherwise have connected with him. This move will last until the glyph breaks or time runs out on the spell. Hero can still move normally while this spell is active.

Hocus Pocus (4 MP) – A totally random spell that can do a numerous number of actions. As of now, it can cast any other Command Selections spell for the 4 MP cost, cause Hero to shrink, grow in size, grow a flower on his head, gain a Timer effect, gain invisibility, invincibility, and more that have yet to be documented.

Kaclang (6 MP) – Hero turns into metal, becoming immune to all damage for a limited time. During this time he is also unable to move or attack at all and the effects of this spell can’t be canceled early. If used in the air, Hero will fall to the ground – which can result in self destructs. Can be one-hit by another hero using Metal Slash in this form.

Kamikazee (1 MP) – Hero begins to glow and then explodes, instantly eliminating himself and dealing massive, unblockable damage to any enemy around him. This will count as the opponent K.O.’ing Hero in one-on-one matches. Won’t appear if Magic Burst does.

Magic Burst (All Remaining MP) – A giant purple explosion spreads out from Hero, dealing massive damage to any opponent caught in it based on how much MP Hero had when using it. Hero can be hit out of using Magic Burst, which will cancel the move without restoring MP.

Zoom (8 MP) – Hero fires himself into the air, going off-screen and falling back down onto a random part of the stage, even if used offstage. If there is a platform that can’t be passed through above him when using the spell, Hero will hit it and then begin to fall.

It will take a long time for the full details about Hero’s moveset to come out since the character was just released, but this is a good start for players trying to jump on using him early. As more information about his Command Selection spells is released this list will be updated to reflect new information.