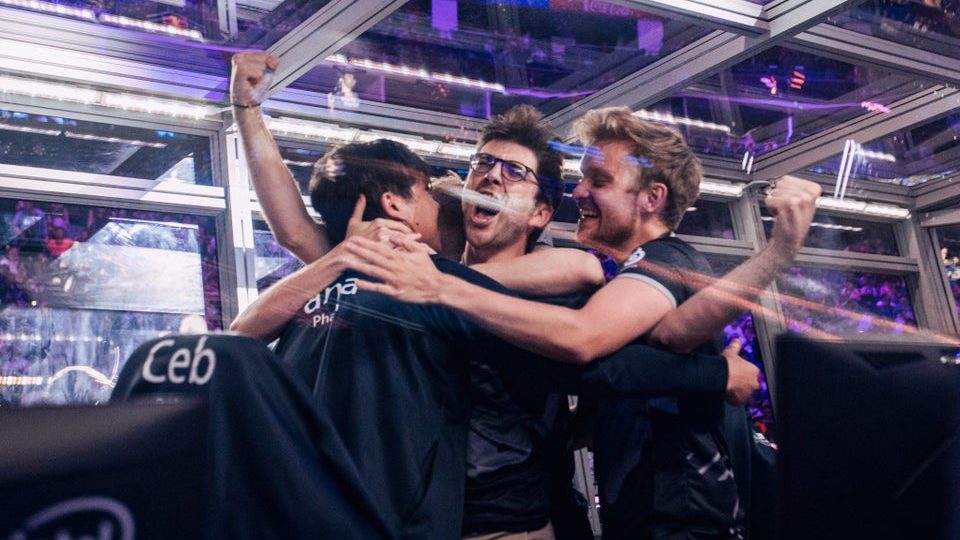 The defending champions have had a long road back to the top, but after a messy game one, OG bounced back and took down PSG.LGD to secure a spot in the grand finals at The International 2019.

Related: OG and PSG.LGD are destined to clash again at The International 2019

Game one saw the Chinese powerhouse pick up two burst carries in Ember Spirit and Gyrocopter, while OG went for global potential in Zeus and Nature’s Prophet, rounding out their draft with a focus on teamfights.

OG got off to an early lead, making good use of their highly mobile lineup. Sébastien “Ceb” Debs dominated on his Nature’s Prophet, setting up some immense teamfights for the European squad as they could immediately descended on any LGD heroes, pushing that advantage.

However, LGD had their own fair share of highlights. A deafening crowd cheered on Wang “Ame” Chunyu as he executed a perfect solo kill on Ceb and got his team back on track.

The game remained even between the two sides, with both teams keeping an eye on their big right click carries in Lu “Somnus” Yao and Anathan “ana” Pham. There wasn’t a heavy swing in the match until LGD took a risk, running a teamfight on OG’s side of the map.

LGD went on to secure the first Aegis for Somnus after some erroneous execution from OG in the Roshan Pit.

LGD used the map to their advantage as the Chinese squad farmed faster and harder than their European opposition. While both teams continued to trade kills, the pendulum was swinging towards LGD.

OG committed several uncharacteristic mistakes, allowing LGD to swiftly take down objective after objective. Ana bought back for a Roshan fight and lost his life soon after due to bad timing, allowing LGD to take out the big threat of the Chronosphere, and the unstoppable push into OG’s base began.

After failing to stop that push, OG called GGs and started plotting for game two, where they picked up the highly used Tiny along with an Alchemist and Chen combo to piece together a powerful mid game threat. LGD went with two tanky strength cores in Sven and Dragon Knight as a response.

Despite facing a Chen and Tiny, LGD decided to go for two Hand of Midas on both Ame and Somnus. While a standard item choice for Ame’s Sven, Somnus’ Dragon Knight could not stand up to the overwhelming pressure from OG’s lineup. Left unable to invade OG’s jungle, the Alchemist appeared with a 10-minute Radiance, and promptly ran over LGD.

LGD meekly conceded defeat, sending the series to a game three decider with the momentum firmly on OG’s side.

Once again, OG and LGD’s battle stretched to the final game on the main stage. But early in the draft, LGD seemed to make a big error.

OG was able to secure a second game with both Alchemist and Chen as LGD prioritized keeping the Io off the table and picking up Tiny for themselves. The Europeans rounded out their roster with a Topias “Topson” Taavitsainen Tidehunter while LGD proceeded with the two support kings this tournament, Elder Titan and Shadow Demon.

This time, LGD did a much better job of keeping the Alchemist in check. With a mid Tiny, it became much easier to invade the enemy jungle, and Alchemist only managed to farm a 15-minute Radiance, a far cry from ana’s game two performance.

However, the Radiance power spike was still too powerful, and LGD still could not handle the Alchemist.

LGD focused all their efforts on shutting down the Alchemist, but OG spent their own on trying to protect him. The multitude of buffs available for OG helped the Alchemist survive multiple bad situations, allowing ana to have another imperious performance.

LGD found themselves on the back foot once more to the Chen and Alchemist combo. OG secured the Aegis and went up the high ground, only to be repelled by a perfectly executed combo as LGD pulled off an incredible defensive team wipe.

No matter how big the advantage for the enemy team, OG never looked like they were thrown off their game. In another show of just how good their teamwork is, OG shook off the team wipe and decimated the remainder of LGD’s defenses to take the 2-1 victory.

The TI8 champions forged their path to yet another championship, getting the opportunity to defend their title in the grand finals against one of LGD, Team Liquid, or Team Secret. This is the first time a team has made back to back TI finals since Natus Vincere did it three times at TI1, TI2, and TI3.

LDG will have to fight for another chance at OG when they play the winner of Liquid and Secret’s bout at 9pm CT on Aug. 24.