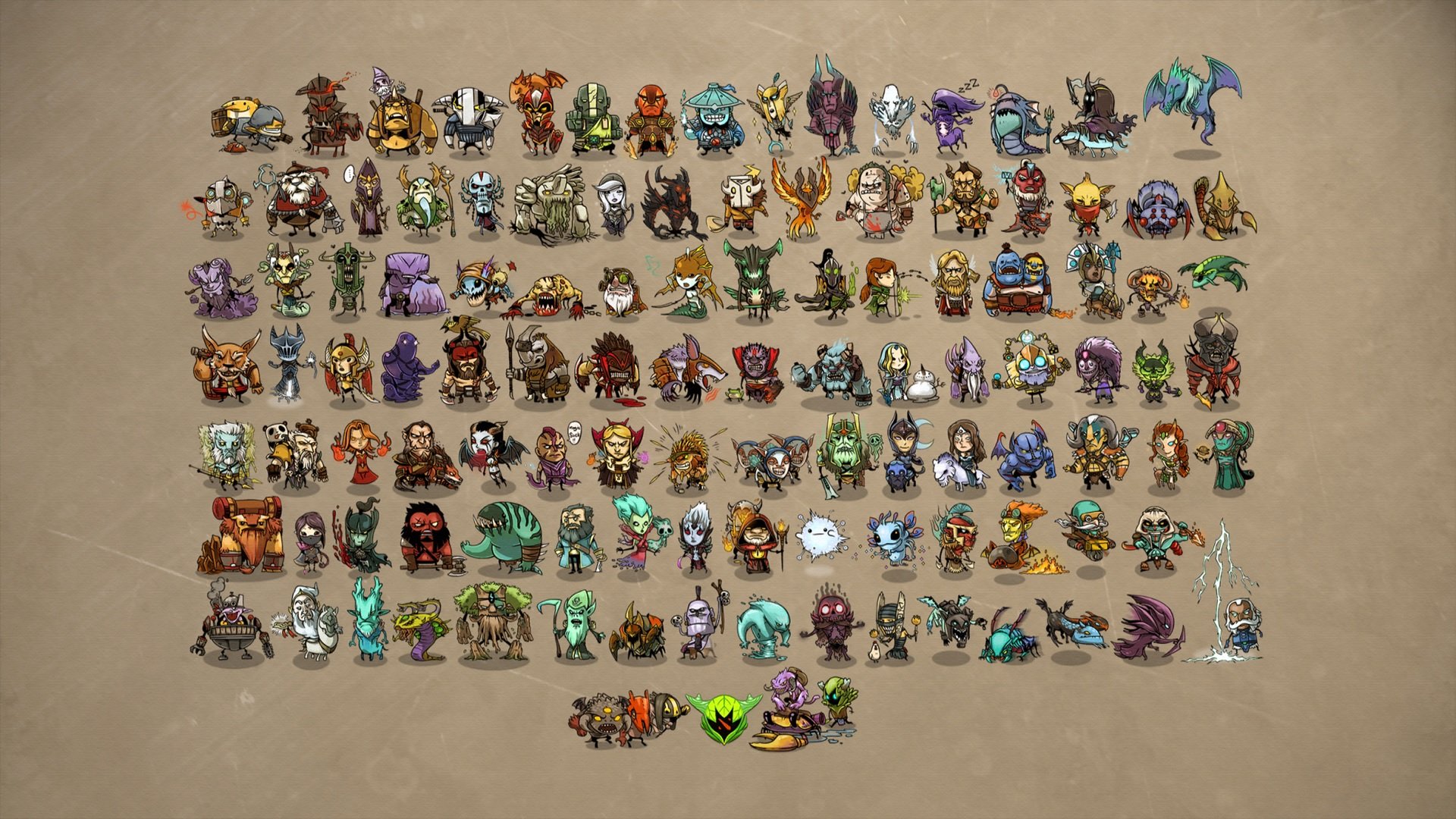 Dota 2 takes pride in its freeform gameplay where players are given the freedom to experiment and take certain heroes in directions they weren’t really designed for. Unlike competing titles such as League of Legends, Dota 2 doesn’t hard-lock players into roles like mid, AD carry, or jungle. While heroes in Dota 2 are still given role classifications, these tags more or less serve as guidelines rather than hard and fast rules.

Roles in Dota 2 aren’t actually dictated by which lane the hero goes to, contrary to popular belief. Instead, positions fall in line with farm priority from positions one to five—the first position will typically be given more space to farm creeps than the fourth or fifth position. Thus, the names for each role in this guide correspond to their individual purposes and gameplans.

But Dota 2 still has roles just like any other MOBA—and knowing which heroes fit best into which positions on your five-man team, and even the opponent’s team, is essential. After all, having a well-balanced hero composition is crucial to victory. And placing the right picks in their respective roles can make a huge difference.

If you’re thinking of stepping up your game in a certain role, or you just want to learn about what each position entails, here’s a guide to the main roles in Dota 2.

Position one: The safe lane carry

While Dota 2’s official roles cite almost half the hero roster as a “carry,” the word holds a different meaning when referred to in the context of positions one to five. The safe lane carry or position one tends to sacrifice early-game prowess for late-game might and thus receives the most farm priority to speed up their item timings.

Most carries in the game are agility-based, like Juggernaut and Anti-Mage, since it’s the best physical damage scaling stat, providing both damage and attack speed. Strength heroes in this role, such as Lifestealer and Wraith King, generally trade some late-game potency for an earlier power peak and also function as robust frontliners.

Carries are designed to be weaker earlier on, though not hapless. A good laning partner that complements your skillset can drastically improve your ability to keep up or even take over the lane. Some carries can output significant damage even at lower levels but need their supports to help provide lockdown. Some just want to sit tight and farm and require supports to chase away or harass potential enemy annoyances.

To scale well later into the game, last-hitting skills and knowledge of optimal farming routes and areas are essential. It’s generally accepted that safe lane carries will disappear from most skirmishes to focus on amassing gold, though advanced players with good reads on the game state can join fights and obtain kills for further cash injections. This is especially important on heroes with powerful ultimates that can turn the tides of battle, like Faceless Void’s Chronosphere and Spectre’s Haunt.

When they finish farming, however, hard carries become wrecking balls that are difficult to stop. Between their high damage output and ability to take on multiple heroes at once, they can take over games on their own whenever they have a sizeable level and net worth advantage.

Arguably Dota 2’s most popular role, solo mid has always been associated with players who have a high level of game sense and mechanical skill. As the second position from the top, solo mids enjoy high farm priority and solo experience. While safe lane carries usually require many items to reach their potential, mid heroes often reach a power spike with one or two items that allows them to exert undue influence on the game.

Historically, the solo mid role has had the responsibility of ganking the side lanes upon reaching level six. Heroes like Queen of Pain, Puck, and Storm Spirit fall into this group of mid laners thanks to their burst damage and mobility skills. These heroes leverage high experience gain in the mid lane to set the pace of the game and to keep the other team in constant terror.

Over the last few years, however, the farming mid has risen in popularity. These heroes usually have innate wave clear potential in the form of AoE magic nukes or innate farming skills, like Shadow Fiend’s Shadowrazes or Templar Assassin’s Psi Blades, allowing them to obliterate lane and jungle creeps for an overwhelming net worth advantage

No matter which way you orient, mid laners set the tempo of the game. They have access to game-changing power runes in the river, which can quickly compound or nullify any advantage. Being in the center of the map makes you equidistant from side lane hotspots, where a breach from an over-leveled hero can be devastating.

The choice mostly boils down to your team’s overall strategy and the heroes you already have in your draft. Keep in mind, however, that choosing the farming mid usually means that your team will need to compensate in some other manner, such as having less freedom to roam the map or pick aggressive fights.

Once known as the suicide lane, the off laner’s role has transformed drastically in recent years from its historical duty as a solo laner left out to dry. It’s perhaps one of Dota 2’s most underappreciated jobs because its identity is one of the murkiest. Due to the position’s inherent demand for utilitarianism, a wide variety of heroes from all sorts of attributes and roles can ply their trade here, trying to do and buy whatever your team needs the most.

Most off lane heroes tend to have high staying power in the lane or an escape skill to quickly get out of dodge. They seek to disrupt and wreak havoc throughout the game and are often judged by their ability to slow down the enemy carries rather than their own stats.

Off laners tend to serve double duty, such as an initiator through massive ultimates like Tidehunter’s Ravage and Mars’ Arena of Blood, or spammable AoE skills like Axe’s Berserker’s Call and Slardar’s Slithereen Crush. Summoning heroes like Beastmaster and Nature’s Prophet are also popular, using mass units to swarm and dominate the lane, leading into a tower push. Depending on the meta, greedier damage dealers like Bristleback see play here.

When it comes to item purchases, position threes tend to err on the side of caution and build tankier, team-oriented items. Common pickups include auras, like Vladmir’s Offering and Pipe of Insight, that are never really bad or cheap utility that can enhance you or an ally’s staying power, like Lotus Orb and Solar Crest. Off laners focused on initiation might rush a Blink Dagger or Eul’s Scepter.

As an off laner, accept the potential see-sawing in every match. Some days, you can crush the opposing safe lane carry and end up as the most farmed hero on your team. Other days, you’ll get destroyed and wind up being a glorified support. Regardless, remain troublesome and demand attention from your enemies to deal with you in a bid to secure your better-scaling cores.

Officially termed “soft support” by Valve, the role remains more commonly referred to by its number or roamer. Some of the game’s purest gankers, roamers, and disablers find themselves as a four and often can change the face of a skirmish through spectacular spellcasting.

Usually starting in the off lane, position fours tend to leave their lanes early on to roam. These heroes possess long-range skills, like Earth Spirit’s Rolling Boulder and Earthshaker’s Fissure, and often make their way to other lanes to set up key kills from a distance. Another subset of soft supports is magic damage dealers, such as Phoenix and Dark Willow, that prefer to soak up a free lane but make up for it with an undeniable teamfight presence even with little farm.

Position fours are also often tasked to be wave clearers, which means quickly nuking creep waves to push out or defend lanes. Heroes like Lina and Rubick fulfill these obligations superbly and often benefit from acquiring gold and items.

When soft supports transition later into the game, they have the potential to become some of the game’s most fearsome crowd controllers. A four’s movement and positioning are paramount to success, as well as pulling off on-the-fly calculations for whether you’re strong enough to go head-to-head with enemies that are usually stronger than you.

And finally, we come to the hard support—the position with the least farm priority of all. Hard support heroes like Lion, Crystal Maiden, Vengeful Spirit, and Witch Doctor are all designed to be able to contribute to their teams without much in the way of equipment. That’s due to their damage output and utility being baked into their abilities first and foremost.

They’re tasked with making sure that their cores are able to farm comfortably by boxing out opposing heroes through harassment and occasional use of their abilities in lane. With good positioning and cooperation with the utility support, in the case of rotations or tri-lane setups, they can even help secure early kills.

These heroes are fragile, however—sometimes even more so than your typical agility carry. It used to be common to see hard supports holding nothing but Boots of Speed and a few stat-boosting items like Magic Wand or Bracer, but gold in Dota 2 is a lot easier to save than ever before thanks to numerous changes over recent patches to make support items cheaper. Pro teams have been experimenting with wave-clearing position fives and invade into incredibly dangerous enemy territory since their low net worth makes it a low-risk loss even if they fall.

If you don’t like dying, you probably shouldn’t be playing this role. But it’s the concept of selflessness and sacrifice within the hard support position that allows the rest of the team to excel.

Whatever role you choose to take up, always remember that each one has its own set of directives and an overarching purpose in mind. Formulate your strategy around these roles and you might find that there’s more cohesion in your drafts and gameplay.